Sea change in Turkey’s attitude towards its Byzantine heritage

The recent opening in Istanbul of two prestigious research centres dedicated to Byzantine studies—the first in Turkey—may help the country to finally claim its place at the forefront of research into the art, archaeology and 1,000-year history of Byzantium. Modern Turkey has long struggled with its approach to the Byzantine period. Some Turkish nationalists regard the 11 centuries of Byzantine rule that collapsed with the Ottoman conquest of 1453 as the “history of the Greeks”. The Islamic elements of the Turkish president Recep Tayyip Erdogan’s AKP party have ensured that the legacy of Christian Byzantium remains a live issue.

Greek and Turkish support The Centre for Late Antique and Byzantine Studies, known by its Turkish acronym Gabam, was formally launched at the privately funded Koç University in December 2015. It is led by the Turkish art historian Engin Akyürek. The centre, which focuses on art history and archaeology, will initially have two full-time academic staff, two post-doctoral fellows and four PhD students—one of whom is Greek.

The centre is a development that itself signals a very new departure. It has the backing of Turkey and Greece’s wealthiest industrial dynasties through the Istanbul-based Vehbi Koç Foundation and the Athens-based Stavros Niarchos Foundation. The Vehbi Koç Foundation set up Koç University in 1993 and is also backing the landmark Koç Contemporary Museum, which is due to open in Istanbul in September.

Two years of negotiations brought substantial support for Gabam from the Greek foundation. “Until now, there was not a fruitful collaboration between Greek and Turkish scholars working in the field,” Akyürek says. “However, Gabam is a kind of joint venture between important Greek and Turkish institutions. I believe that this collaboration will increase, and we are planning to develop joint projects.”

With the goal of tracking changes in art and architecture, the centre has launched a photographic project to document all of Istanbul’s surviving Byzantine buildings. A team of photographers has already recorded detailed images of seven sites, including 250 high-definition photographs of Hagia Sophia, the monumental sixth-century church that became a mosque and is now a museum.

A shared legacy Christina Lambropoulou, the chief financial officer of the Stavros Niarchos Foundation, a philanthropic organisation that has disbursed more than $1.8bn in grants over the past 20 years, says: “This collaboration between the two foundations—a Greek and a Turkish one—not only highlights the importance of Byzantine studies, but also constitutes a testament to a shared cultural, artistic and historical legacy.”

Bogazici University, a top-ranked state institution, recently opened its Byzantine Studies Application and Research Centre. Its director, the Turkish scholar Nevra Necipoglu, says that it will “accelerate and sustain” Byzantine studies, adding that a conference on the state of the discipline in Turkey is due to be held this month.

Bogazici has benefited from 20 years of support for Hellenic studies from the Onassis Foundation, she says, and an Onassis fellow in art history is on the centre’s board. In 1940, there was only one Byzantine art history course in Turkey, taught at Istanbul University. Today, the subject can be studied at universities across the country, with Hacettepe University in Ankara, the Turkish capital, emerging as another leader in the field.

Will Turkey’s ships come in thanks to Byzantine boost? 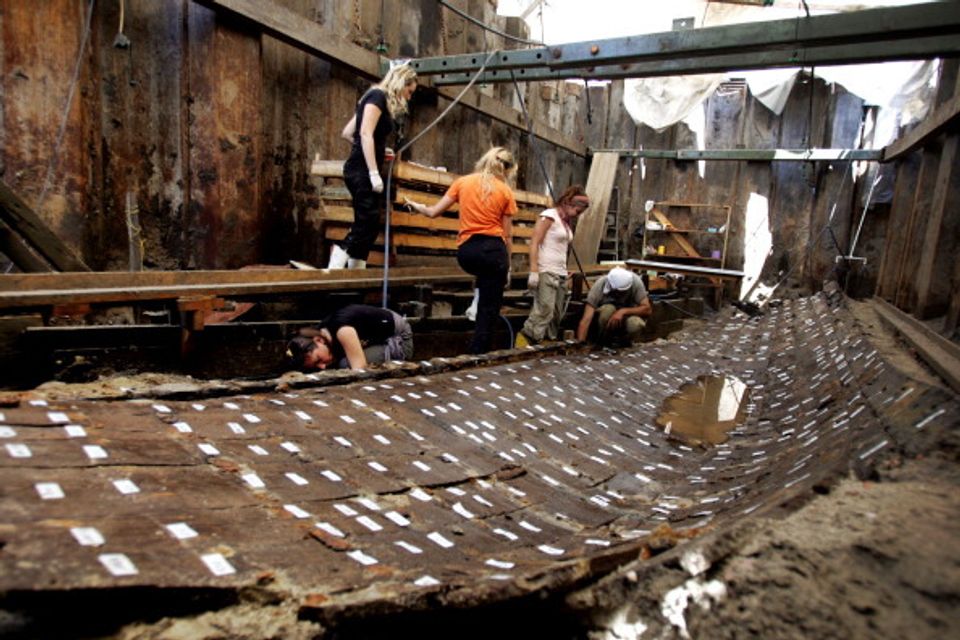 Turkish archaeologists work on the remains of a tenth century Byzantinian ship in Istanbul, 20 June 2006. Archeologists recently discovered the remains of an ancient port of Constantinople form the fourth century which was built by eastern Roman Emperor Constantine. The remnants were unearthed during archeological works on the site of the Marmaray Project, an endeavour to build an underwater tunnel in the Boshporus in Istanbul. AFP PHOTO/MUSTAFA OZER (Photo credit should read MUSTAFA OZER/AFP/Getty Images)

The British scholar Judith Herrin says that the growing momentum behind Byzantine research in Turkey could galvanise efforts to stage the first museum exhibition of the extraordinary 37 sunken ships recovered between 2005 and 2013 during excavations for the Marmaray rail tunnel under the Bosphorus. The ships are being conserved at the rate of around two a year, and the first to be completed will soon be displayed in the Istanbul Archaeological Museum, according to Turkish media reports.

A full museum exhibition could be perfectly timed for 2021, Herrin suggests, if the International Association of Byzantine Studies, a giant five-yearly gathering of more than 1,000 scholars, agrees on Istanbul as the host city for the first time since 1955. Tension has long existed between some international Byzantine scholars and the Turkish authorities, driven by disputes about loans and the challenges that foreigners face in obtaining archaeological permits.

Five years ago, the International Association of Byzantine Studies, then meeting in Sofia, chose to hold its next meeting in Belgrade rather than Istanbul, prompting Herrin to resign as president of the association. The directors of Istanbul’s two new Byzantine research centres say that the drive for an Istanbul conference in 2021 is already under way.