The Seattle Art Fair (3-6 August) kicked off its third edition with an expanded exhibitor roster and measured optimism from local and international dealers. Since the fair’s 2015 debut, under the auspices of billionaire Paul G. Allen's Vulcan Inc., in partnership with Art Market Productions, it has been eyed with interest: an urbane and underserved market with an existing coterie of dedicated patrons, plus a new class of would-be buyers from the computing and biotech fields.

As tempting as this untapped potential is, the conversion of casual interest into serious collecting can be a slow process. Many viewed the third edition as crucial for the fair’s national profile, and organisers had doubled down on outreach. Alongside bold-face names like Dale Chihuly, Dick and Betty Hedreen, Barney and Rebecca Ebsworth, Alice Walton, and Bill Gates Sr. and Mimi Gardner Gates, dealers were pleased to see buyers from Miami, New York, Los Angeles, the Bay Area, and Vancouver come through the doors of the slick CenturyLink Field Event Center. 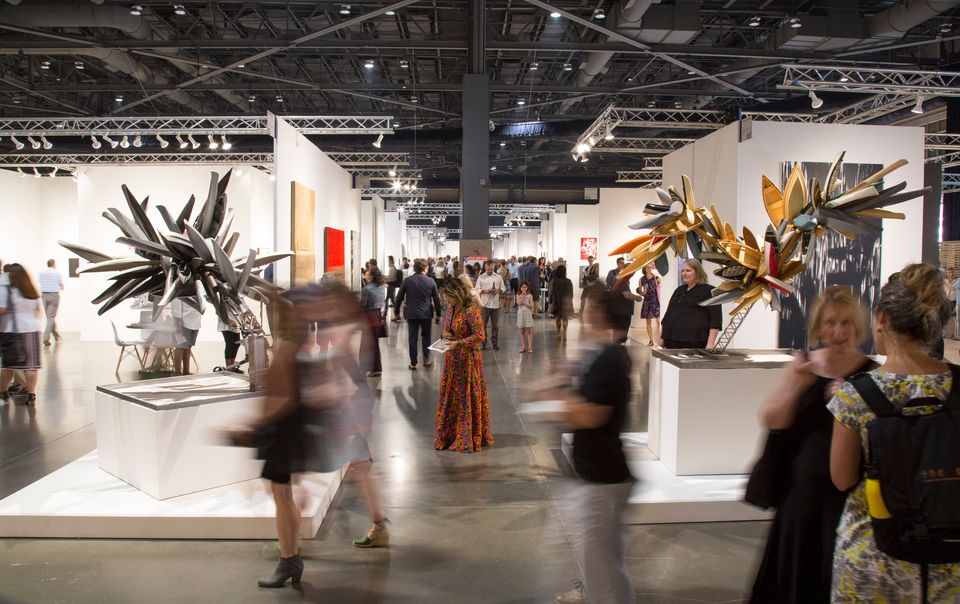 Although the close-knit Seattle scene was still mourning the death, on Monday, of local arts booster and Costco founder Jeffrey Brotman, according to dealer Greg Kucera, it may have been “a galvanizing moment”, too, as some 5,000 people turned out during the collectors’ preview on Wednesday evening, up 20% from the previous year. “The old maxims of a summer slowdown no longer apply,” says fair director Max Fishko, of Art Market Productions. “I also think that people are just tired of going to the same old places and are looking for something new.”

While some of the coastal imports described the opening as mainly social, local dealers fared well with existing clients. Kucera had taken on 50% more space this year to showcase works by Northwest artists, including the late Michael Dailey, whose gradient color-field paintings (ranging from $17,000 to $27,000) were garnering buzz. Woodside/Braseth’s stand was packed, and sales had been humming along, including lithographs by Mark Tobey and Jacob Lawrence, a blue-and-red Michael Spafford painting for $45,000 and Margaret Tomkins’s Sign of the Sun (1957) for $35,000—Tomkins being “the Lee Krasner of the Northwest”, according to John Braseth. His advice for dealers new in town? “You can’t come in here and do a hard sell”, he says. “The tech folks feel targeted.” As Seattle dealer James Harris puts it, “There are a lot of people here who are interested and have the potential to become collectors. Art fairs can do some of that education.” 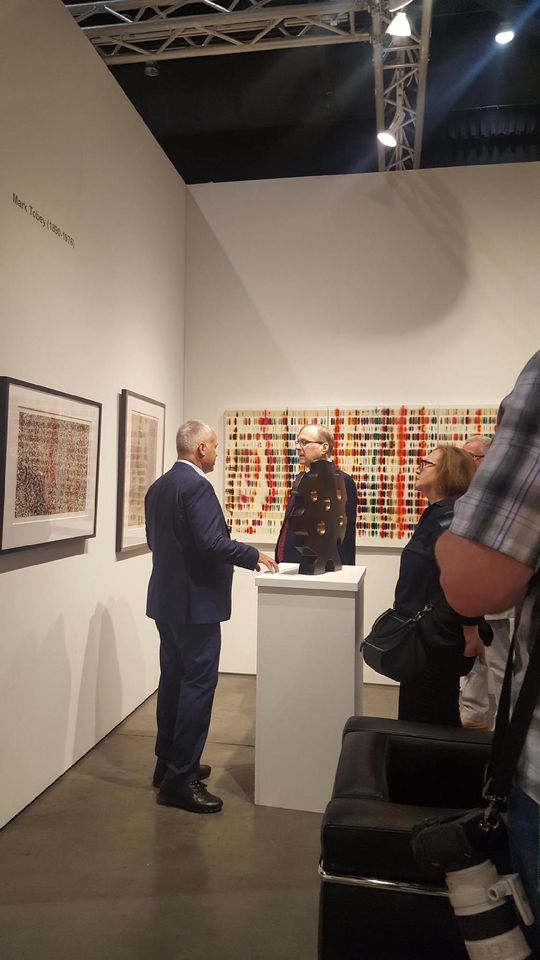 West Coast dealers see the fair emerging as a useful hub during an otherwise blank spot on the calendar. Theo Downes-Le Guin, owner of Portland’s Upfor gallery, was doing the fair for the third time, and by Friday had placed three Michelle Grabner bronzes with a private Northwest collection. “I feel as if the Seattle Art Fair’s unique identity was in place from year one, and that’s quite unusual for a young fair,” he says. “Each year the crowd has become more sophisticated.”

Roberts & Tilton, in its second year, reported a “very successful” opening day, with several pieces on reserve for institutions, including a 1970s Betye Saar wall hanging adorned with hanks of hair that the artist had recently discovered hidden away under her couch (asking $160,000). “It’s very different from last year”, says the gallery’s Julie Roberts. “It’s better.” Speaking with Los Angeles colleagues, Bennett Roberts reported that the mood is “positive”, and “they’re selling a lot of their less expensive pieces”.

At the David Zwirner booth, stocked with a potpourri of gallery artists—from a large Oscar Murillo pieced canvas to a highlighter-yellow John McCracken plank, plus a large purple Yayoi Kusama pumpkin to coincide with the artist’s blockbuster show at the Seattle Art Museum—director Robert Goff told The Art Newspaper, “We brought a booth we’d bring anywhere—Frieze, Miami.” Serious collectors had been through, but he was circumspect about sales before the weekend. “People do buy,” he said on Friday, “but they’re working right now. And I feel like they do work very hard here.” 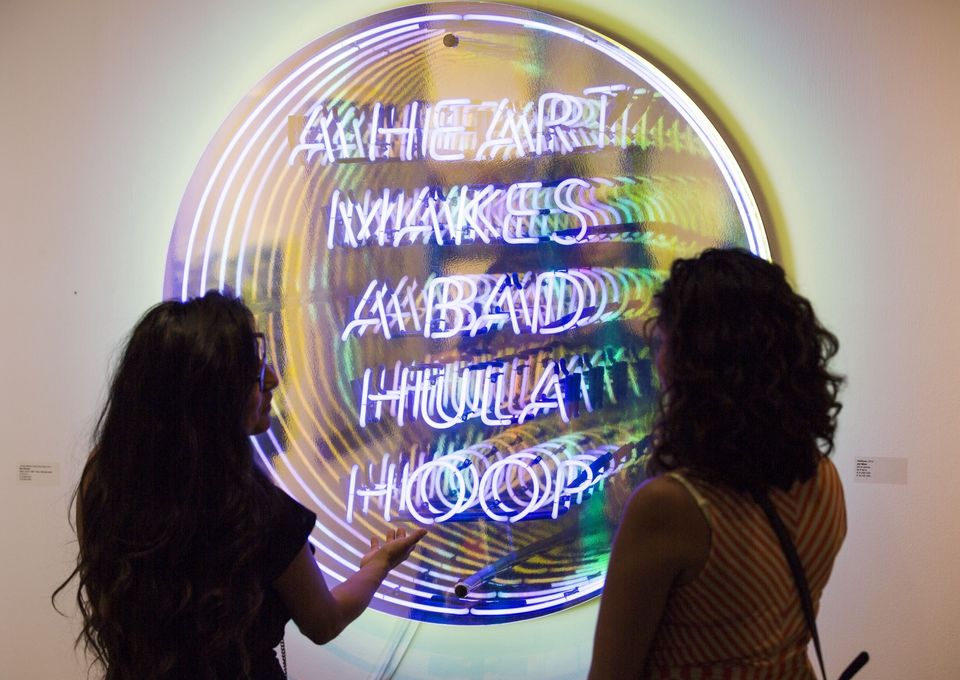 Cheek by jowl with the blue-chip players were smaller outfits from the US, Canada, Cologne, Paris, Tokyo, and Seoul. Boca Raton’s Sponder Gallery presented a solo booth of kinetic sculptures by architect-engineer-artist Anne Lilly, ranging in price from $4,200 to $65,000, which seemed to be the fair's sweet spot, price-wise; three had sold within the fair’s first 24 hours. “We don’t often show in the same building as Gagosian”, notes the gallery’s Cristina Longo, citing one draw for the smaller gallery participants.

Laguna Beach-based Peter Blake, who specializes in California Light and Space artists such as Helen Pashigan and Mary Corse, both featured in his booth, was doing the fair for the first time. His impression was that “people here want to collect; they don’t want to feel like a second-class city.” He was impressed by the number of collectors who had traveled specifically for the fair: “Lately it’s these ‘outside’ markets—Dallas, Chicago, Seattle—that are the most surprising.”