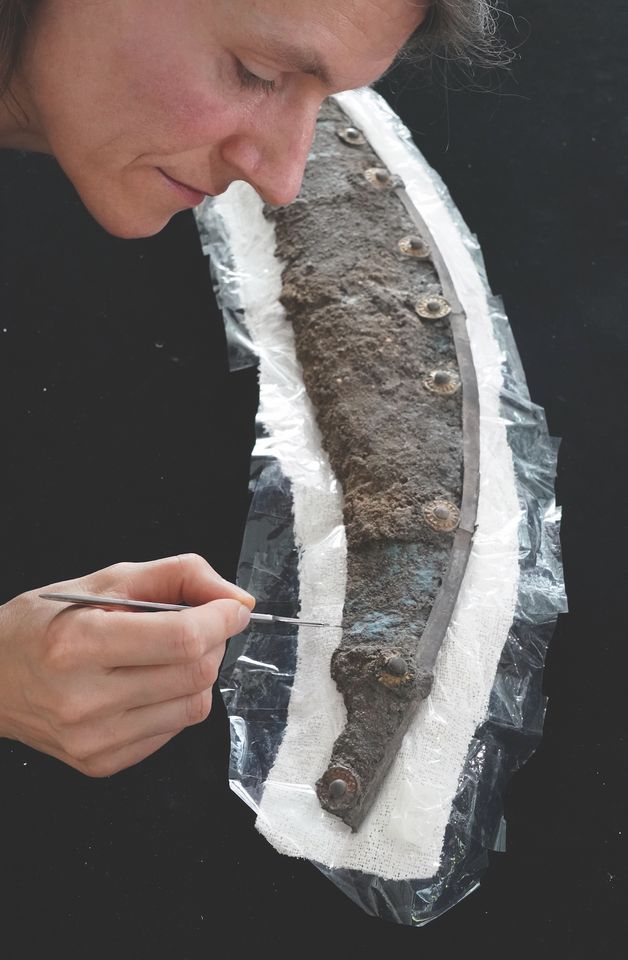 A conservator works on the 1,700-year-old wooden shield, unearthed in a Roman tomb in central Germany Peter Endig/dpa-Zentralbild/dpa/Alamy

Restorers at the Landesmuseum in the city of Halle have determined that a fragment of a painted wooden shield excavated from a princely tomb near Magdeburg is 1,700 years old, making it the oldest known panel painting in Germany.

Germanic warriors, according to the Roman historian Tacitus in his work Germania, eschewed splendid weapons but made an exception for their shields, “which are diversely painted in specially chosen colours.” These shields constitute the origin of panel painting in Germany—a connection that is still reflected linguistically. (The German word for shield, Schild, emerges in the verb schildern, to depict, and in the Dutch word for painting, schilderij.)

The wooden shield has rotted and no image remains, but fragments of paint could be detected, says Christian-Heinrich Wunderlich, the head of the restoration workshop at the Landesmuseum in Halle. Under a microscope, the pigments were identified as “Egyptian blue”, which was widely used in the Roman Empire, and vermilion, which was only available in a few Mediterranean locations at that time.

“These pigments were not cheap and must have been Roman imports,” Wunderlich says. Examinations under the microscope revealed that the paints were applied in layers, and that the wood was prepared with a chalk and lime base to create a smooth surface for the paint to be applied, he says.

The original shield would have been about 1.30m in diameter and it was probably painted on both sides, Wunderlich says. The fragment was discovered in Gommern, near Magdeburg, in a tomb belonging to a prosperous chief who died aged about 30, although his identity is not known.

It is the most important tomb find of the late Roman era in central Germany. Alongside the shield, archaeologists discovered a gold neck ring and brooch, silver belts, spurs, a knife, coins and arrowheads, drinking glasses, a bronze vessel for mixing wine and a bronze stool. Many of these items are of Roman origin. Wunderlich says Germanic warriors acquired such objects either in payment for their services as mercenaries or in looting expeditions.

Other items such as a silver shield buckle share similarities to finds in Scandinavia and suggest that the deceased man was well-connected.

Wunderlich says the fragment of shield will be part of a new permanent exhibition addressing the Roman imperial period that opens this autumn at the Landesmuseum.