Sotheby’s profits were dented by a squeeze on both seller and buyer commission charges, as auction houses forced to cut competitive deals for both consignors and third-party guarantors in order to secure high-value works such as Amedeo Modigliani’s Nu couché, which sold in May on its low estimate of $150m to an irrevocable bidder. Courtesy of Sotheby's

After the results were announced, Sotheby’s share price fell by more than 10% (from $52.89 to $47.80) in the first five minutes after the Dow Jones opened, before rallying to around $50 per share.

High-value does not equal big profit

The chief reason for the drop in earnings was a sharp decline in the the auction house's profit margin on commissions, down to to 14.1% in the second quarter and 15% over the first half of 2018.

The reason? First, competition between auction houses for top consignments means the vendor commission is often waived in order to secure the work or collection (and sometimes the seller will also receive a portion of the buyer’s premium). Secondly, according to a Sotheby’s statement, buyer's premium was also used “to offset auction guarantee shortfalls and fees incurred in respect of auction guarantee risk sharing arrangements”. During an earnings call earlier today, Mike Goss, Sotheby’s chief financial officer, said: “In the second quarter of 2018, the art market was driven by competitive high-value consignments from fiduciary sources such as estates, foundations and charities.”

It was just two high-profile guaranteed paintings which between them “reduced Sotheby’s auction commission margin by 1.4% and 1.1% during the three and six-month periods, respectively,” Goss said. Although Sotheby’s would not comment further or identify the works in question, it is not difficult to guess which ones they were. 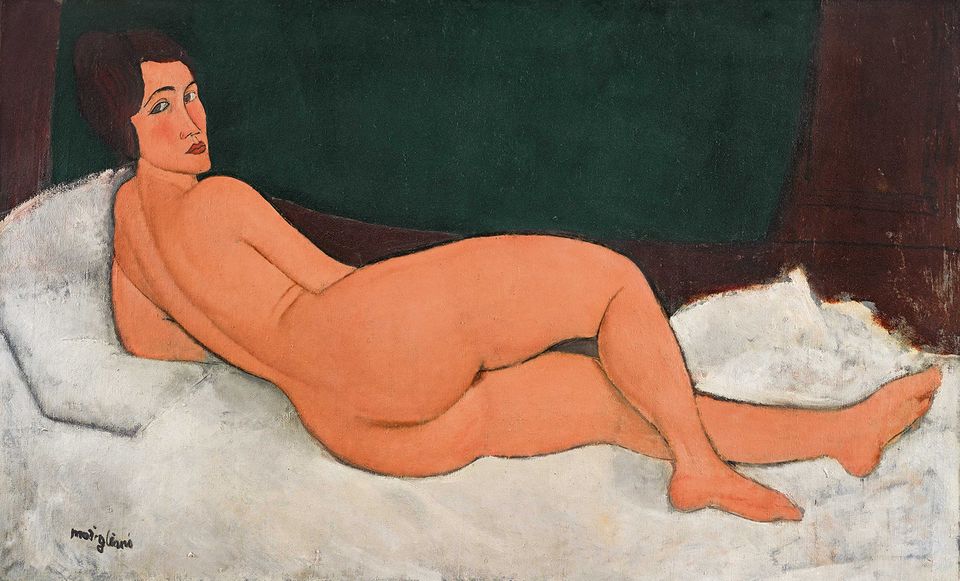 Amedeo Modigliani’s Nude (1917). As Sotheby’s chief executive Tad Smith observed during the call: “It was the very highest priced lots that were a little softer than the rest.” Courtesy of Sotheby's

Ironically, the first is probably the most valuable painting sold at auction this year—Amedeo Modigliani's Nu couché (sur le côté gauche, 1917) which in New York in May scraped away at its low estimate of $150m to a single bid, selling to the third-party irrevocable bidder. No doubt the irrevocable bidder received some financial reward for guaranteeing it at such a sizeable sum—it is certainly hard to imagine they will have paid a buyer’s premium. As Sotheby’s chief executive Tad Smith observed during the call: “It was the very highest priced lots that were a little softer than the rest.” Adam Chinn, Sotheby’s chief operating officer, said the May season in New York was “unusual” in that the sale of the Rockefeller collection at Christie’s “added some additional competitive pressures”.

The second work was likely one sold in London in June: Picasso’s 1932 Buste de Femme de Profil (Femme écrivant). The work was guaranteed in-house, but fell short of its unpublished pre-sale estimate of $45m—given in dollars—and sold on a single bid of £27.3m ($36m). A major blow, attributed to “a pricing error” by Smith (although he did not identify the painting in question).

“A couple of bids here or there would have made a big impact on our margin” Smith said during the call. “The two paintings we keep referring to… I think those will be unique,” Smith says, although “it will be hard to make [the loss incurred by] those two paintings back through the rest of the year”.

Reasons to be cheerful

On the face of it, Sotheby’s year so far looks mute in comparison with the bullish news published by its competitor Christie’s in July, pronouncing total sales of £2.97bn ($4bn) so far in 2018. But the reality is not so clear cut—as a private company Christie’s does not have to report profits. And Christie’s is in direct competition with Sotheby’s for the top consignments. Particularly in light of the £614m sale of the Rockefeller collection, Christie’s income may also not be as healthy as at first seems, as its commission margins are, doubtless, similarly squeezed.

The latest earnings do give Sotheby’s shareholders some cause to be optimistic, however. Private sales were up by 63% to $543m during the first half of 2018 and this year, around 30% of buyers were new to the company. Many of those new buyers came in through online sales, which have grown 30% from last year, totalling more than $100m. The auction house's business in Asia is also strong—in line with Christie’s, Asian clients account for around a third of global sales and have bought eight of the top 20 lots sold at Sotheby’s so far this year.

Reflecting the buoyancy of the city’s auction market over the past year, Sotheby’s Paris has achieved its best first half results since the opening of the French art market in 2001. That result was helped by the auction house setting a new record for Chinese porcelain sold in France—$19m for the Imperial 18th-century Yangcai Famille-Rose porcelain vase sold in June.

However, during the question and answer session at the end of today’s earnings call, Goss also mentioned the possibility of staff cuts. “We will be taking a look at our head count,” he said, but added that any cuts were likely to be minimal, “less than a 2.5% number”.