Sotheby's to offer Modigliani nude with $150m estimate, one month after it was shown at Tate 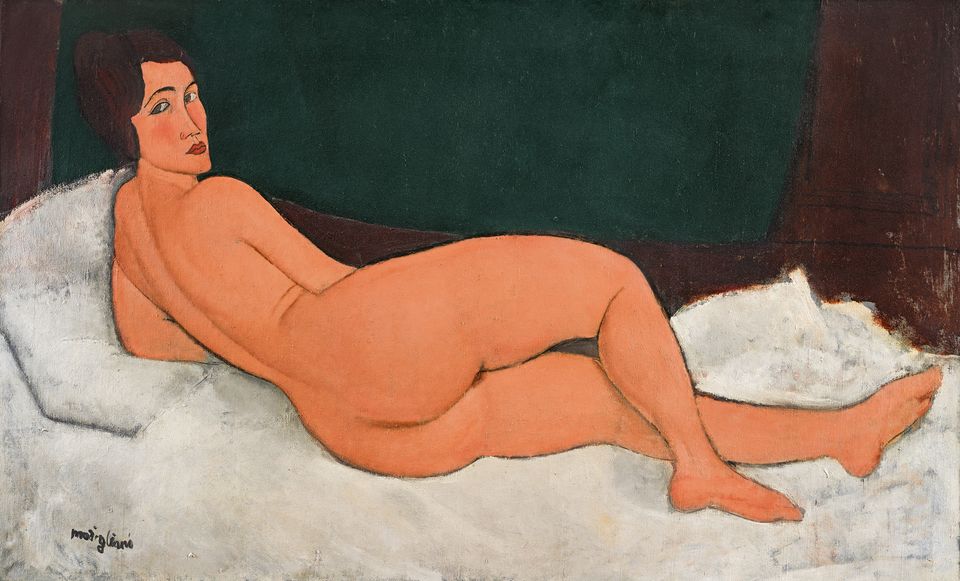 A rare painting of a reclining nude by Amedeo Modigliani—which until the first week of April was hanging on the walls of Tate Modern in London—is set to headline Sotheby's 14 May evening sale of Impressionist and Modern art in New York. Backed by a third-party irrevocable bid, the work is expected to bring more than $150m.

Although Sotheby's declined to comment on the identity of the seller or the third-party backer, the painting has been identified by Bloomberg as owned by the Irish horse-breeding billionaire John Magnier, who reportedly acquired it for $26.9m at Christie's in 2003 when it was put up for sale by the casino mogul Steve Wynn. The painting, from the artist's sought-after nudes series, was recently shown in a large survey at London's Tate Modern Courtesy of Sotheby's

Part of a series of nudes—22 reclining and 13 seated figures—the artist painted between 1916 and 1919, this canvas is the largest, at nearly 58 in across. It is also the only horizontal picture to show his anonymous model at full length. When Modigliani's paintings and works on paper were shown in Paris in 1917 by the dealer Berthe Weill, their forthright depictions of unashamed subjects unbound by allegorical trappings resulted in censorship by the police.

Citing precedents from Italian Mannerist painting, African carvings, and Iberian sculpture, Simon Shaw, the worldwide co-head of Impressionist and Modern art, said in a statement: "While situating itself within a classical canon of nude painting, the work is radically innovative in style... there is the nude before Modigliani, and there is the nude after Modigliani."

As dramatic as the $150m estimated price may seem—Sotheby's is touting it as "the highest estimate ever placed on a work of art at auction"—the structure of an irrevocable bid means it has, effectively, been pre-sold. In an irrevocable bid, a third party (not the consignor, not the auction house) has agreed to purchase the painting at an undisclosed sum plus buyer's premium; however, if the bid goes higher, the third party will receive a negotiated portion of the amount beyond the agreed-upon purchase price, essentially a kickback. Such structures, which differ from normal guarantees in that the third party may share in the upside of the eventual price, have been criticised for their opacity since their introduction in the late 2000s.

But the demand may indeed be there. In November 2015, another Modigliani, Nu couché (1917-18), sold for $170.4m at Christie's New York. Chinese billionaire collector and Long Museum founder Liu Yiqian beat out at least six other bidders to become its new owner.