Works dealing with issues of post-colonial politics, black power, and identity find a receptive US audience 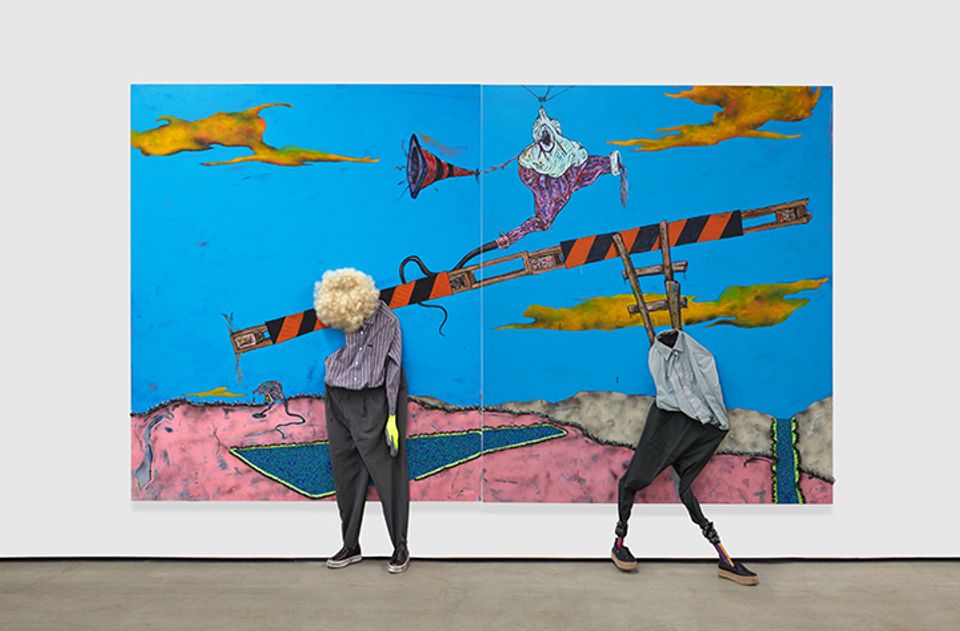 Two years after the Armory Show’s Focus section offered a cross section of African galleries (the geographic frame was abandoned thereafter), dealers and young artists from South Africa, already in the spotlight with the opening of the Zeitz Museum of Contemporary Art Africa, have made a particularly strong showing at this year's fair (8-11 March), as US audiences encounter themes of racial dialogue, self-definition, and hope that resonate strongly in the Trump era.

At Whatiftheworld, of Cape Town, Athi-Patra Ruga tackles issues of race, identity and sexuality through imaginative photographs, performances, and tapestry portraits. A gallery spokeswoman says that “Ruga is trying to rewrite history”, noting that works made specifically for the fair honor the 1920s Senegalese performer Francois [Feral] Benga. She sold a tapestry, Lizalis Indinga Lakho I Autistik Imperium (2014-17), for $160,000 to a collector who has pledged to donate the work to a US institution.

Nicodim Gallery, of Los Angeles, sold out its booth of eight paintings and sculptures by the South African artist Simphiwe Ndzube within the opening hours of the fair, for prices between $20,000 and $40,000. Taking off from the swenka (“dandy” in Zulu) culture that exists in mining towns, where on weekends workers will mount peacocking competitions, Ndzube uses found objects such as snakeskins and traffic cones to augment exuberantly hued paintings of joyful, contorted bodies. Since his first gallery show, last September, Ndzube’s market has been “on a rocket to the moon”, says gallery director Benjamin Lee Ritchie Handler; he will have his first US solo show at the Rubell Family Collection in Miami later this year. 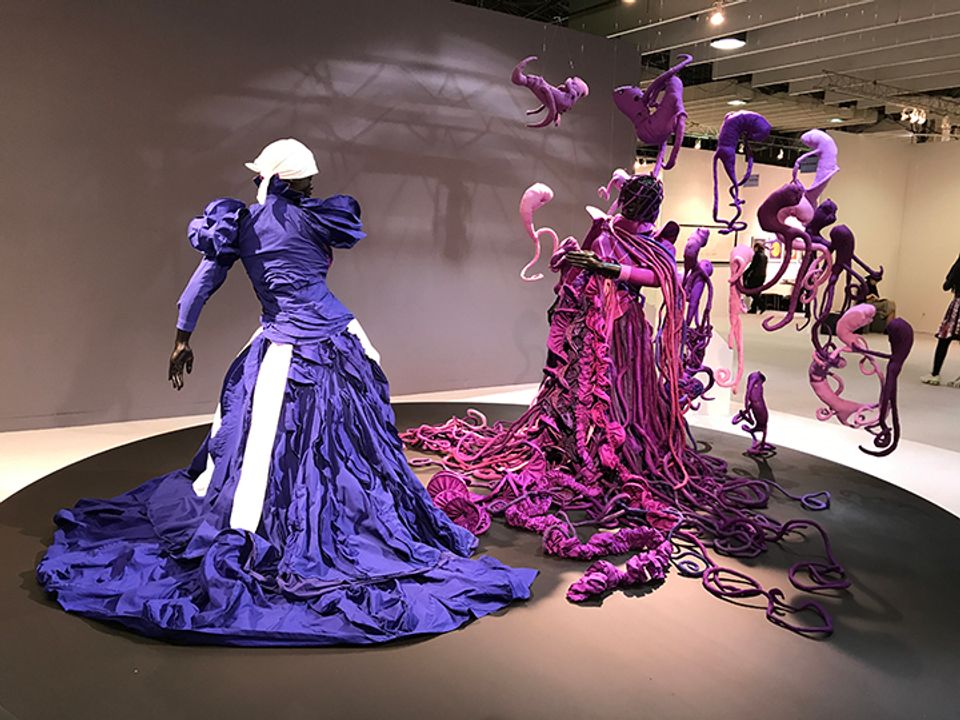 The winner of this year’s Presents prize, $10,000 awarded by Athena Art Finance, went to blank projects of Cape Town, which mounted just four works by two young South Africans: a knotted and woven wall hanging that invokes religious devotion and festival bunting by Igshaan Adams, and three portraits of a quasi-universal black male figure in tender poses by Cinga Samson. Adams and Samson, 35 and 32 years old, respectively, “are part of a generation that’s celebrating being young and black; not looking back at apartheid, but toward the opportunities and chances”, says the gallery’s Catherine Humphries. The gallery’s owner and director, Jonathan Garnham, adds, “It’s an exciting time to be in South Africa, in Africa at that”, but “we’re wary of our artists being put in the Africa box. The scene here is not a bubble or a fashion.”

Other works finding favour are more subtly encoded with the continent’s history. Johannesburg’s Goodman Gallery, returning after an absence, is showing a selection of photographs by the South African photographer David Goldblatt ($15,000-$22,000) and paintings by the Zimbabwean artist Misheck Masamvu ($16,000-$19,000). According to the gallery’s Elizabeth Callinicos, “There is a lot of interest from US collectors and New York galleries” in the works, which speak to themes like life under apartheid. “Goldblatt does not like to be called a political artist; he positions himself as an observer. He has covered South African life since the 1940s…he has seen so much. Masamvu does also not consider himself a political artist, but his works are a comment about living under a system [in Zimbabwe] and feeling defeated and disillusioned.” 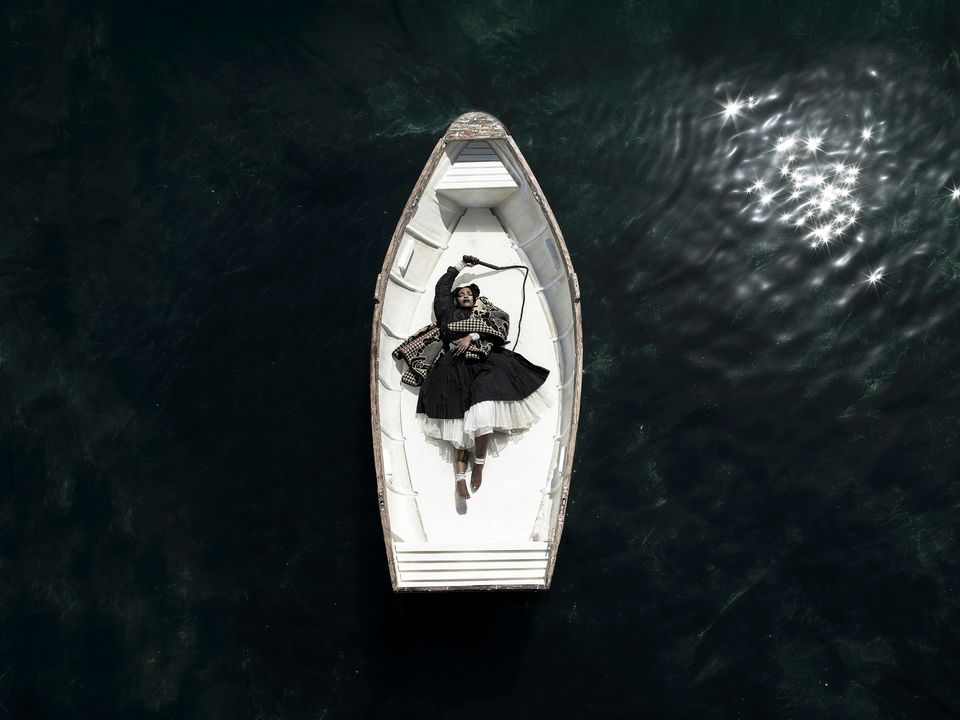 Galerie Ron Mandos, of Amsterdam, has sold five works, including three photographs and two three-part videos by Mohau Modisakeng, already well known for his Passage series addressing forced migrations, shown at the 2017 Venice Biennale, and from last year’s Performa commission, Zion. However, the gallery’s Nick Majoor says he has noticed a definite uptick in interest from US buyers, which he attributes to Modisakeng’s knack for merging colonial critique and vexing beauty. Pointing to the photograph Passage 6 (2017), with its direct allusions to slave transport, Majoor says, “It’s a boat with a black man in the water, but water is also a force of life, gives life…it gets under your skin.”

Might artists who are processing South Africa’s apartheid past offer lessons for the US, at a time when heretofore submerged racial tensions are front and centre? “It’s a different context but the themes are universal”, Callinicos says. The Armory Show’s director, Nicole Berry, sought to create space (even literally, by widening the booths) for galleries to bring works with complex content. “There’s a focus on work that’s addressing important topics in an interesting way”, she says. The tilt toward South Africa “certainly was not a conscious choice”, says Berry, “but my eyes were opened by my trip to Johannesburg….there is an optimism that’s refreshing, and I do think the US audience is more open to [this work] based on what’s happening in our own country.”