Space race: how the pandemic is pushing museums to rethink design

Experts predict bigger galleries, a stronger connection to the outdoors and an end to the expansion juggernaut 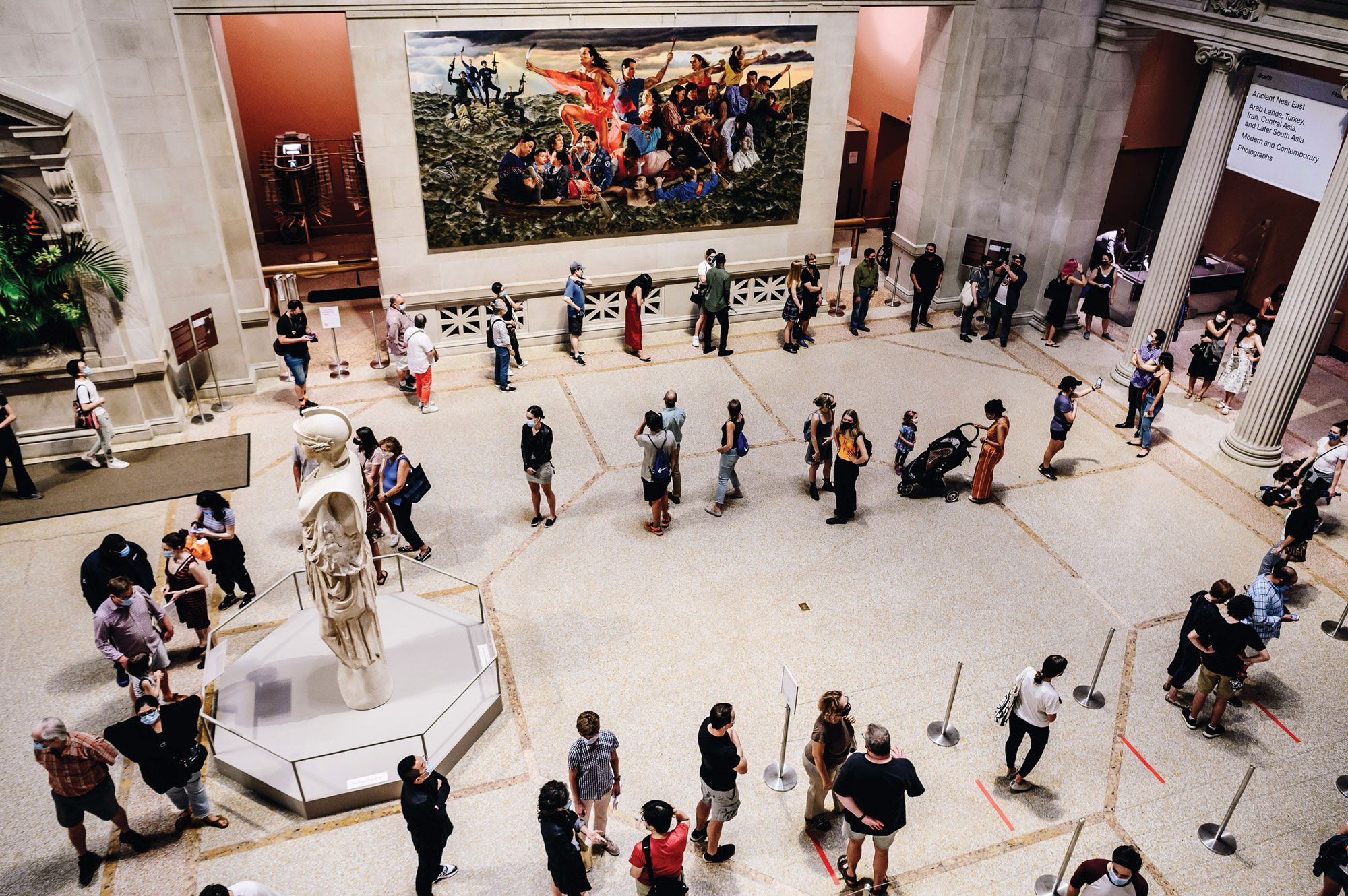 Socially distanced visitors in the Great Hall of the Metropolitan Museum of Art in New York on 29 August, reopening day Photo: Nina Westervelt/Bloomberg via Getty Images

As US art institutions consider how they welcome visitors and guard their health in a vastly changed environment, the coronavirus pandemic is spurring a deeper rethinking of future museum design.

After a nationwide shutdown in March, many museums have gingerly reopened with stringent social distancing rules that profoundly affect the flow of people through entrances and galleries. With visitors often limited to 25% of usual capacity and no clear timeline for a Covid-19 vaccine, museums are opening a conversation about longer-term changes to their buildings. Some ideas have sprung from stopgap safety measures adopted since reopening, while others were germinating even before the pandemic.

Preventing bottlenecks as visitors file in and out of a museum, six feet apart, is an immediate priority. “You want the option of opening a new entrance and closing another one depending on the flow of traffic,” says Ron Elad, a principal in the Los Angeles office of the engineering firm Buro Happold. “You will not necessarily use all entrances at the same time because then you’ll have an uncontrolled influx.”

The British-Ghanaian architect David Adjaye, who recently unveiled his design for a new home for the Princeton University Art Museum, says the pandemic reinforced his notion that “people should be able to come in and out easily”: the ground floor boasts six doorways for entering and exiting.

The Metropolitan Museum of Art in New York, which reopened on 29 August and has just two portals on Fifth Avenue, routes visitors to one or the other when they sign up for timed tickets online. It has improvised an additional “release valve”, allowing people to leave via an auditorium, says Brett Gaillard, the Met’s head of capital and infrastructure planning.

Multiple circulation routes within museums will also be critical to future planning, Elad says. He cites Peter Zumthor’s design for the Los Angeles County Museum of Art (Lacma), which offers “very spacious” paths that “allow for so much social distancing, with almost no bottlenecks at all”. The design has generated controversy, however, with critics pointing out that it will significantly reduce the museum’s exhibition space. 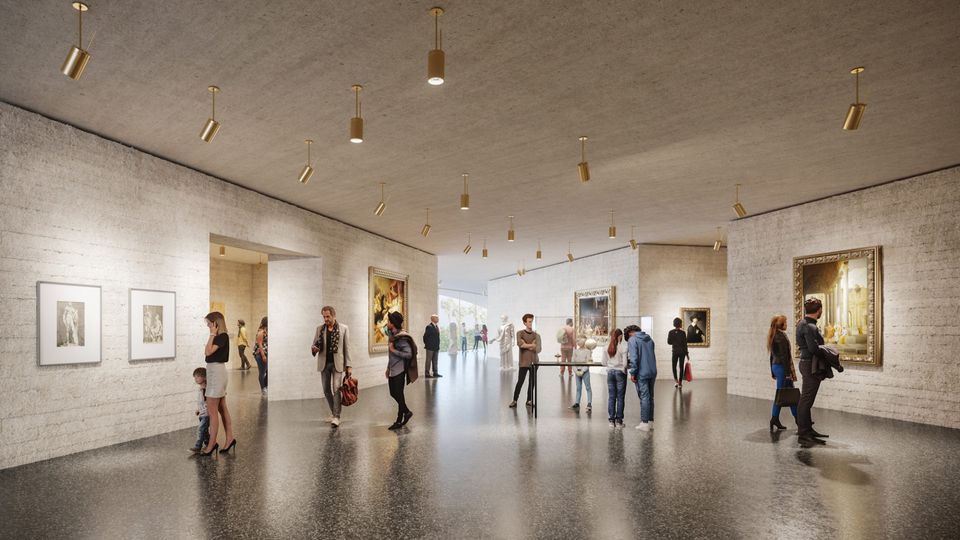 For now, the Met has tailored visitor flow patterns to its various spaces, Gaillard says, devising a one-way route running through the Egyptian galleries and cutting off access to the interior of the Temple of Dendur there.

In the future, experts anticipate bigger galleries that will be purpose-built to allow for social distancing, with the option to divide up the space with partitions as needed. Adjustable gallery architecture “is going to be important”, says Bruce Davis, a partner with the New York architects Cooper Robertson. “You’ll want spaces that can easily be changed and can adapt to changing trends in the display of art as well as the pandemic.”

Similarly, some museums will reconfigure their theatres, which remain largely shuttered to avoid packing spectators into enclosed spaces for performances. “Clients have asked about flexibility,” says Jame Anderson, a principal and cultural practice director in Washington, DC, for SmithGroup, “so that spaces aren’t left dark during the day and can accommodate a varying programme. It’s a huge area of opportunity.”

Davis describes a move away from “theatres that look like Broadway houses” with fixed seating. One of his firm’s clients, the Whitney Museum of American Art in New York, has temporarily transformed its space for performances, education and special events into a socially distanced staff lounge and lunch area during the hiatus in programming, he says. 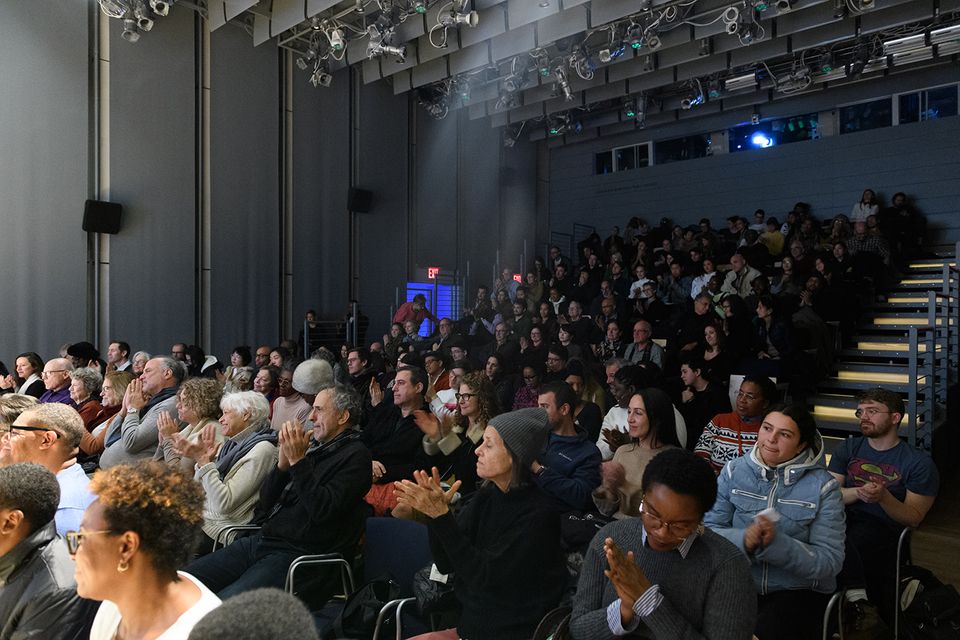 An events space at the Whitney Museum of American Art, shown before the pandemic hit, has been turned into a socially distanced staff lounge and lunch area during the hiatus in events programming Photo: Filip Wolak

Letting the outside in

More than ever, architects and engineers are being asked to enhance the connection between inside and outside in their designs, whether through transparent façades or the creation of open-air cafés. Covid-19 has only underlined the psychological longing for fresh air, they say. Elad points to the translucent exhibition level and partially exposed café of Lacma’s planned building, part of a $750m project due for completion in 2023. Adjaye’s Princeton design also minimises visual boundaries between indoors and out with a sequence of outdoor terraces and “lenses” positioned between its pavilions.

The connection with the outdoors is linked to a more general concern about openness to local communities, on whom museums will depend for the foreseeable future amid the collapse of international tourism. It also threads into debates sparked by US protests against racial injustice— “a second disruptor that we feel will have greater long-term impacts for the museum community and for our profession”, Anderson says. “We have multiple conversations regarding what does ‘welcome’ mean: How can people see themselves in the places we design? How can we design with communities and audiences to shape the places that will enhance their lives?” 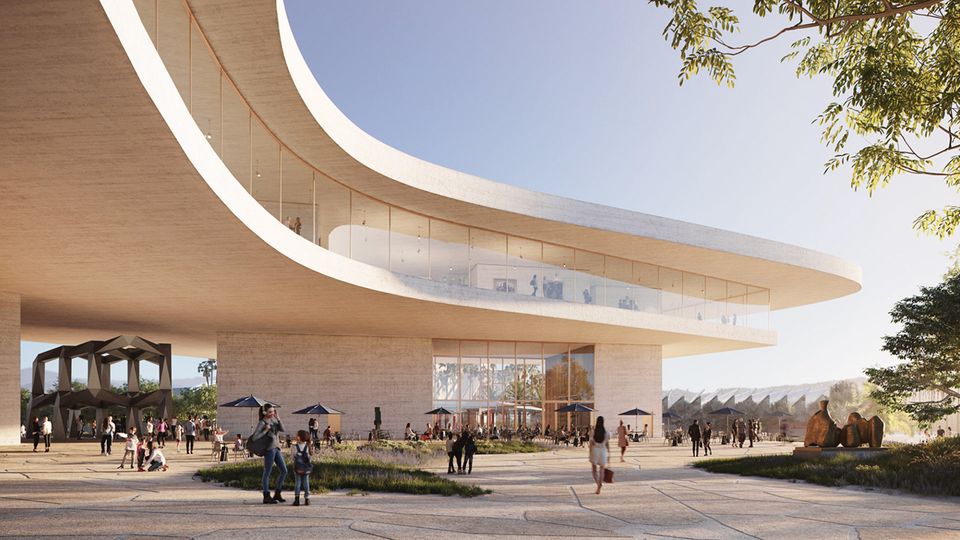 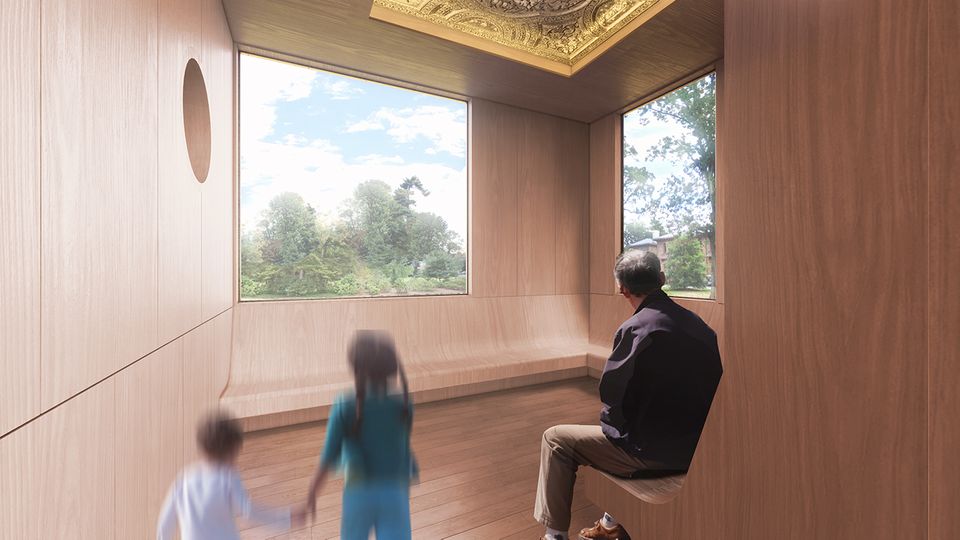 David Adjaye's design for the Princeton University Art Museum will include “lenses” like this one that offer views of the campus Rendering: Adjaye Associates

Museum gift shops could metamorphose in the longer term, from one heavily trafficked hub into multiple mobile units sprinkled around the building. And staff offices may shrink post-Covid, as “we’ll see more balance between working from home and working in the office”, Elad suggests, potentially freeing up the space for more museum programming.

On a more prosaic level, museums have become hyper-attuned to their climate control systems, which are crucial to filtering air to lessen the risk of contagion. Fortunately, engineers say, most museums already had strong filtration and humidity control systems to protect their art, but specifications are likely to become ever more rigorous.

The Philadelphia Museum of Art has stepped up the frequency of its filter changes, and adjusted carbon dioxide sensors to let in more fresh air, says its director of engineering, facilities and operations, Al Shaikoli. This will apply to the museum’s renovated entrance hall, Forum and new galleries due to be completed in early 2021, in the latest phase of its $233m Frank Gehry redesign.

There may be fewer such starchitect-led museum building projects coming in the next decade. The nosedive in museum revenues and resulting financial squeeze have prompted some institutions that were planning major expansions or renovations to halt their plans or scale down their ambitions, architects and engineers at several firms report. Reeling from the downturn, some clients are questioning the wisdom of the expansion juggernaut and contemplating better ways to use the space they already have, Anderson says.

“Even pre-Covid, there was evidence of less interest in large expansions for the sake of large expansions,” she says. “In the 1990s, the idea was, ‘If you build it, they will come.’ Now many institutions are taking a second look at their original buildings or back-of-house space.”

The new mantra seems to be adaptability, all agree. “It’s like a natural disaster,” Elad says of the pandemic. “After you experience one, you want to be ready for the next one.”