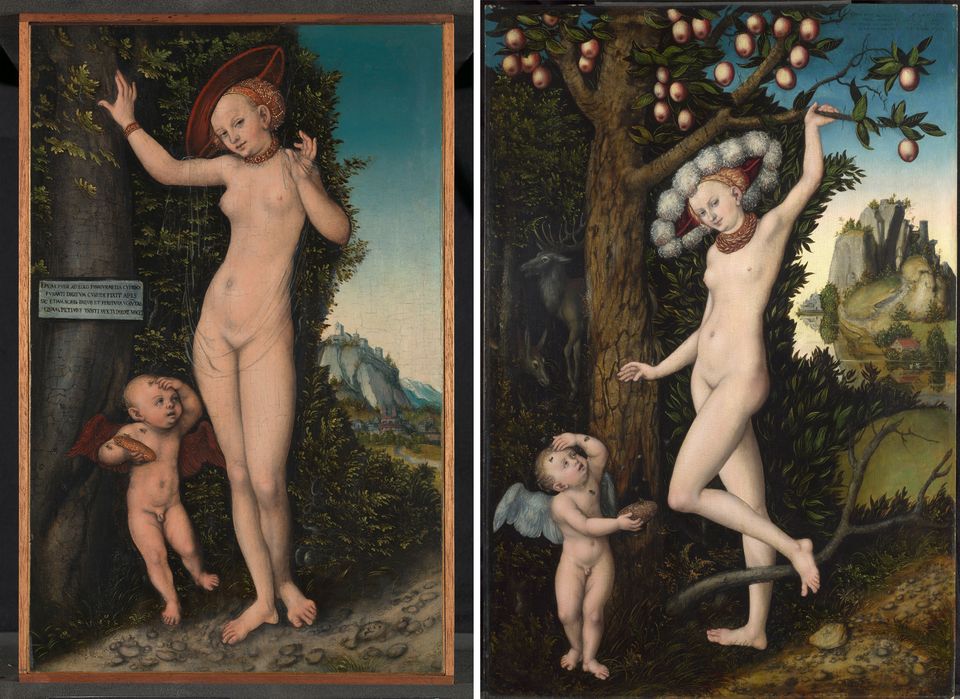 Left: the newly acquired Venus and Cupid by Lucas Cranach the Elder (1529) and; right: the artist's Cupid complaining to Venus (around 1525), which was purchased in 1963 © The National Gallery, London

Lucas Cranach the Elder’s Venus and Cupid (1529) has gone on public display at the National Gallery in London after it was recently acquired by the museum. The German Renaissance master made several works during the 1520s and 1530s with Venus and Cupid as the subject matter. The new work will join the National Gallery’s Cupid complaining to Venus (around 1525) and be displayed in the same room so that visitors can compare and contrast the two works—or play spot the difference.

Both paintings show cupid with a honeycomb in hand, being stung by bees while his mother Venus, the goddess of love and beauty, gazes out at the viewer. By contrast, the new acquisition, painted later, depicts cupid with red wings rather than white, matching Venus’s hat, and a transparent veil is draped over her naked body; the work also omits the ass and the stag in the background.

The plaque on the tree in the painting explains that cupid was stung by a bee after stealing the honeycomb—a moral tale showing that fleeting pleasure can result in enduring pain—while Venus’s headdress has an inscription in German that reads: “‘all is vanity”.

“This exquisite small painting shows off Cranach’s characteristic combination of moral purpose with painterly delight in the representation of the female nude set in an idyllic landscape,” says Susan Foister, the National Gallery’s curator of Early Netherlandish, German, and British paintings, in a statement. Cranach was “one of the most impressive and prolific painters of the Renaissance in Germany,” adds the museums director Gabriele Finaldi.

Cranach was active at the time of the Protestant Reformation and was friends with Martin Luther, who he painted on several occasions. The German city of Wittenberg, where Cranach lived for much of his life, was the centre of the reformation. Cranach embraced the new movement and his works reflect the rise of Classical mythology as a subject matter as demand for explicitly religious paintings declined. Cranach had previously worked in Vienna and travelled to the Low Countries before settling in Wittenberg for the rest of his life where he worked for three successive electors, or rulers, of the state of Saxony. He ran a large workshop in which his two sons, Hans and Lucas the Younger, also worked.

The new painting was donated to the National Gallery by the Drue Heinz Charitable Trust, after the death of the philanthropist Drue Heinz last year at the age of 103. Her fortune came from the Heinz family—whose food company is famed for its ketchup and baked beans—who had purchased the work in 1964.