State of the art in Dubai 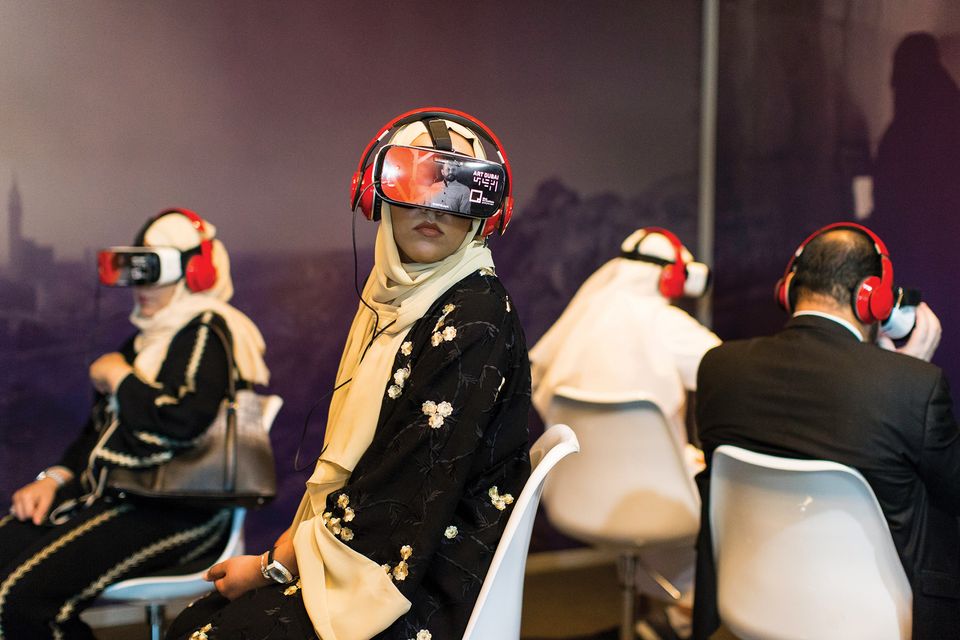 At the end of last year, Dubai appointed what is thought to be the world’s first minister for artificial intelligence (AI). The move is part of a ten-year plan to turn Dubai into a “smart city”, complete with a robotised police force, unmanned flying taxis and a government powered by blockchain.

In a nod to this tech-charged climate, digital works and questions of AI and automation are hot topics at this year’s Art Dubai. Artists and writers featured at the 2018 Global Art Forum, titled I Am Not a Robot, include Yuri Pattison, speaking about “the unconscious intent of algorithms”, the philosopher Aaron Schuster, discussing “depressed robots”, and Fatima Al Qadiri, on technology as a supernatural force.

Shumon Basar, who co-organised the forum, believes that artists play a crucial part in processing technological advancements. “The role of sci-fi is not just to entertain, but to provide genuine cultural diagnosis. We need the lens of culture to tell us what is happening to us,” he says.

Basar’s co-directors are the Vienna-based curator Marlies Wirth and Noah Raford of the Dubai Future Foundation. Raford is helping to establish the Museum of the Future, due to open in Dubai in 2019, which will examine how robotics and AI will affect human life.

Virtual reality (VR) is also proving to be a showstopper at Art Dubai. Reframe Saudi, a VR film having its premiere at the fair, features nine artists, including Dana Awartani and Jameela Mater, who reflect on rapid social and economic changes in Saudi Arabia. The documentary knits together scenes from their studios in Jeddah, Abha and Riyadh with films by the artists.

The director of the film, Matteo Lonardi, has observed an emphatic response. “The narrative as well as the medium is appealing to fair-goers; everyone loves VR. It has so much potential as an art form, as well as having the capacity to put an artist’s work in context,” he says.

Reframe Saudi is not for sale—monetisation of VR is an ongoing issue—but Lonardi thinks that any museum would benefit from the ticket sales a VR work would bring. Saudi Arabia’s Misk Art Institute and the independent arts organisation Culturunners backed Reframe Saudi at a cost of $150,000, he adds.

Enthusiasm was high, but sales were less forthcoming–something the galleries are beginning to make up for this year. Works on their shared stand range from $80,000 to $180,000. Prices include the display units and a ten-year guarantee that teamLab will update the software (installation costs extra).

“Achieving follow-up sales last year was quite difficult because people were just coming to terms with the technology and how it can be maintained. They were also not so familiar with teamLab,” Martin Browne says. “For a lot of collectors, legitimising a contemporary artist only happens when an artist achieves a sale at auction.” The collective’s auction debut came at Phillips Hong Kong in November, when its Universe of Water Particles (2013) doubled its high estimate and sold for $240,000.

This seems to be having a positive knock-on effect. The towering, nine-panel Continuous Life and Death at the Now of Eternity (2017), which shows a profusion of flowers blooming and withering, sold during the preview to a private collector for $130,000, plus $50,000 for the hardware. Museums from the United Arab Emirates and Saudi Arabia have also expressed interest in the interactive works, the dealers say.

Videos—the technological forerunner of VR—are also dotted around the fair. The Lebanese contemporary artist Lawrence Abu Hamdan, the winner of the 2018 Abraaj Group Art Prize, is showing Walled Unwalled (2018), a film about sound leaking through walls. The 20-minute video installation includes the blood-curdling screams a witness heard on the night Reeva Steenkamp was killed by the Paralympian Oscar Pistorius in South Africa.

In any city, the perennial problem for video art is the brisk pace of fairs. “People don’t tend to pause for long at fairs, which tend to be more object-oriented,” says Aleya Hamza of Cairo-based Gypsum Gallery, which is showing a short video by Doa Aly. “But artists are moving away from classical modes of production and the appetite for digital works is certainly on the rise here.”