State of the nations: our pick of the Venice Biennale pavilions 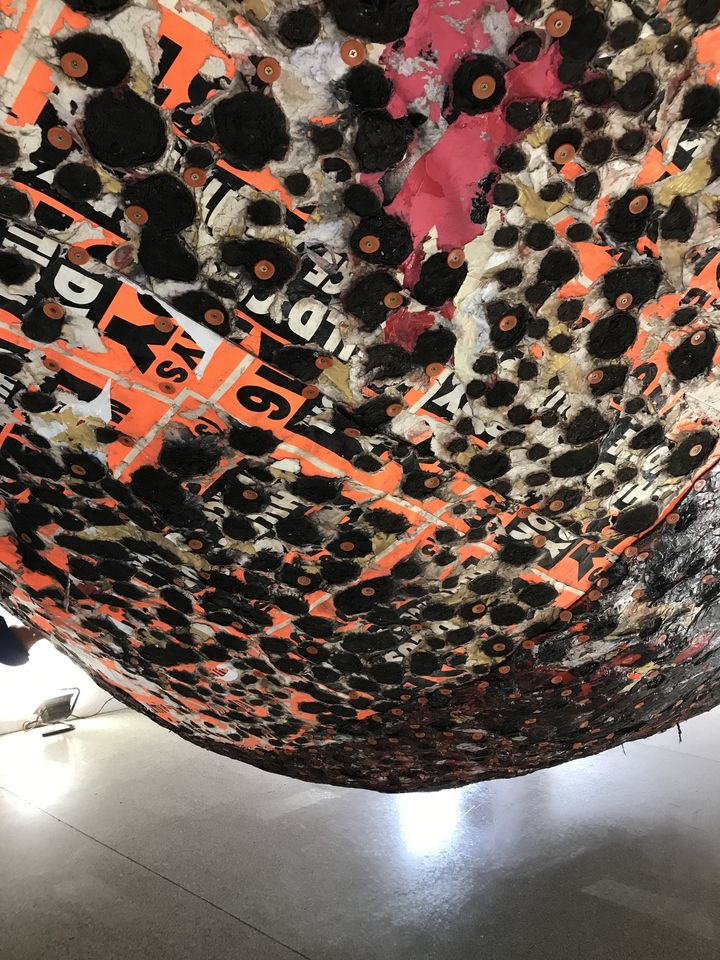 Mark Bradford's Spoiled Foot (2016) at the US pavilion in Venice (Photo: G Harris)

Mark Bradford, Tomorrow is Another Day

The key to Bradford’s long-awaited Biennale exhibition in is a poem written by the artist, which is set in stone on the exterior of the neo-classical US pavilion in the Giardini. It takes as its subject Hephaestus, god of the forge and of artists, who was born lame and expelled from Mount Olympus. “This poem is an interpretive key [to Bradford’s presentation]. It’s about being cast out,” says the pavilion's co-curator, Christopher Bedford, the director of the Baltimore Museum of Art. Works on show include Spoiled Foot, a bulbous mass made from lumber and luan sheeting, and a series of undulating works made from wave endpapers that wrap around the central space (Saturn Returns, 2013-17). 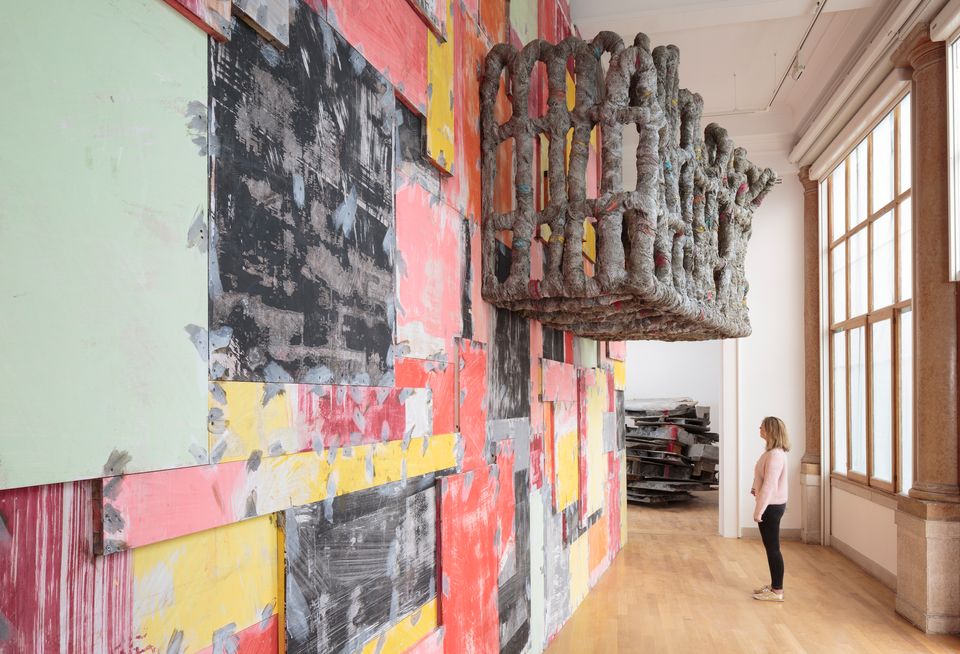 Barlow has filled the British pavilion with big, bulging sculptures fashioned from polystyrene, scrim, timber, concrete and other roughly hewn materials. Abstract forms mix with more familiar objects (a mangled anvil is perched on top of a stack of dismembered pianos). “There’s a slightly melancholic tone to all of it,” she says, reflecting on how the works developed against a backdrop of tumultuous events such as Brexit. In an unusual move, Barlow has installed works outside of the pavilion, her bulbous spheres encroaching on the Giardini. “We spill into Italian territory, and negotiated with France and Germany” she says. “There was this sense of anxiety; we wanted to take [the exhibition] beyond the pavilion.” Cody Choi and Lee Wan, Counterbalance: The Stone and the Mountain

Peep shows and free orgasms are on offer at the Korean pavilion courtesy of Cody Choi who is advertising these dubious treats on the façade of the Giardini building as part of his Las Vegas-style work Venetian Rhapsody (2017). Choi has said that Venice is no different from other tourist hot spots such as Las Vegas and Macau, highlighting the “power and capital” of La Serenissima. His bright pink re-make of Rodin’s The Thinker, crafted from toilet paper, is a startling art historical re-configuration (The Thinker, 1995-6). Lee Wan’s Proper Time installation (2017) comprising 600 clocks soberly charts how long individuals worldwide must work in order to purchase a meal. 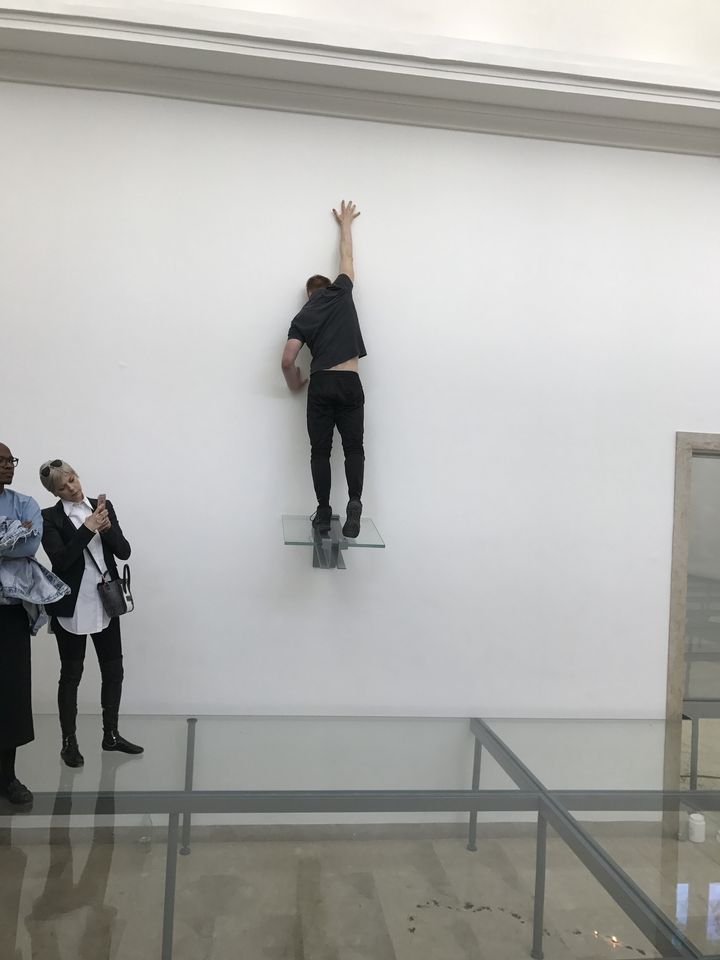 The German pavilion is peopled by young, androgynous individuals who chant, writhe and meld together above and below a raised glass floor. “Post-gender, individualised, peculiar and yet stereotypical: such are the human figures in Imhof’s paintings and scenarios,” according to the Biennale catalogue. The sense of foreboding is heightened by a penetrating background audio piece and four excitable caged Doberman dogs guarding the front of the pavilion in the Giardini. The pavilion’s curator, Susanne Pfeffer, the director of the Fridericianum in Kassel, says that Imhof confronts the “rapid and fundamental political, social, economic, pharmaceutical and technological changes that we are currently facing with a hard realism”. 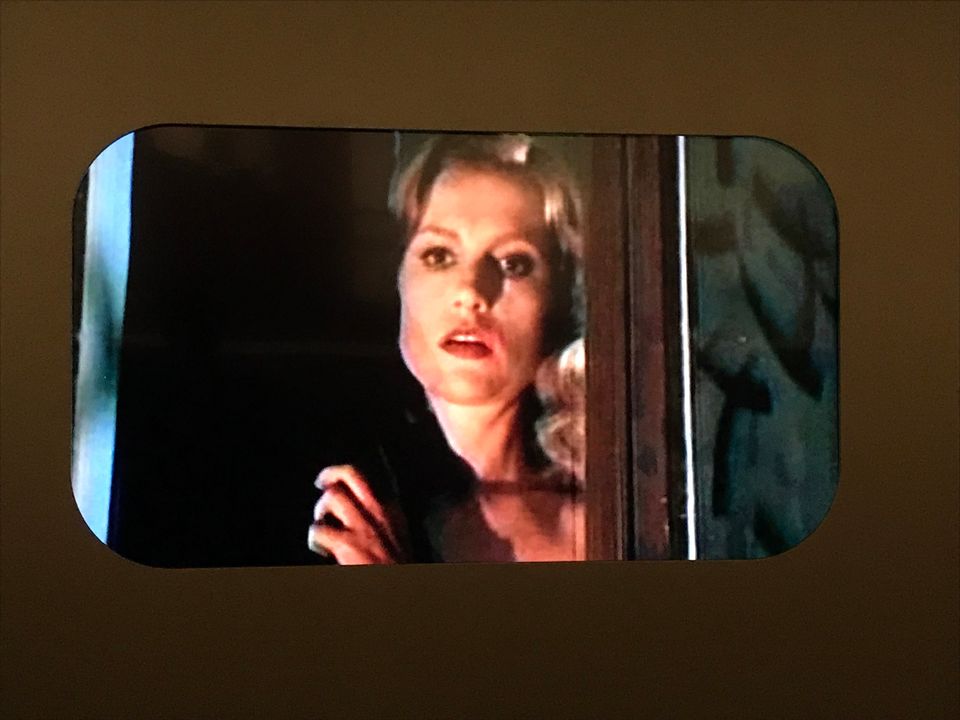 Tracey Moffatt, My Horizon Moffatt’s Vigil film (2017) splices footage of rickety refugee boats with Hollywood stars peering through windows, giving the impression that movie icons such as Elizabeth Taylor and Kathleen Turner are seemingly horrified by the disasters unfolding in front of them. Moffatt also presents two new photographic series, Body Remembers (2017) and Passage (2017). The former shows a maid deep in contemplation against a series of barren, sepia-tinged backdrops (Moffatt is the maid depicted). “My mind went to film noir. I was also thinking of Edward Hopper,” she says. The saturated images in Passage show a motorcycle cop, along with a mother and baby, languishing on a mysterious waterfront, evoking clandestine journeys and treacherous border crossings. Her most intriguing work, The White Ghosts Sailed In, is a grainy, shimmering film of “found” footage showing the horizon from what is now Sydney harbour. The artist says she discovered the film that had been shot by natives using a camera left by Captain Cook just as the Royal Navy returned. “It’s an invasion film” she says. Further video works are screened on the exterior of Australia’s modernist black-box pavilion in the Giardini. Geta Bratescu’s debut at the Venice Biennale is long overdue. This presentation of works in the Romanian pavilion in the Giardini by the nonagenarian, a central figure of Romanian contemporary art since the 1960s, brings together important works dating from the past fifty years, ranging from lithographs such as Mutter Courage (Mother Courage), 1965, to photographs including Alterity (2002-11). Bratescu’s fascination with femininity is explored in pieces such as Mume (Mothers,1997), which muses on motherhood as the font of creation. A sense of physicality pervades; the artist’s hands make their presence felt, for instance, in the video Linia (The Line), 2014, and the drawings series Maini (Hands), 1974-76. 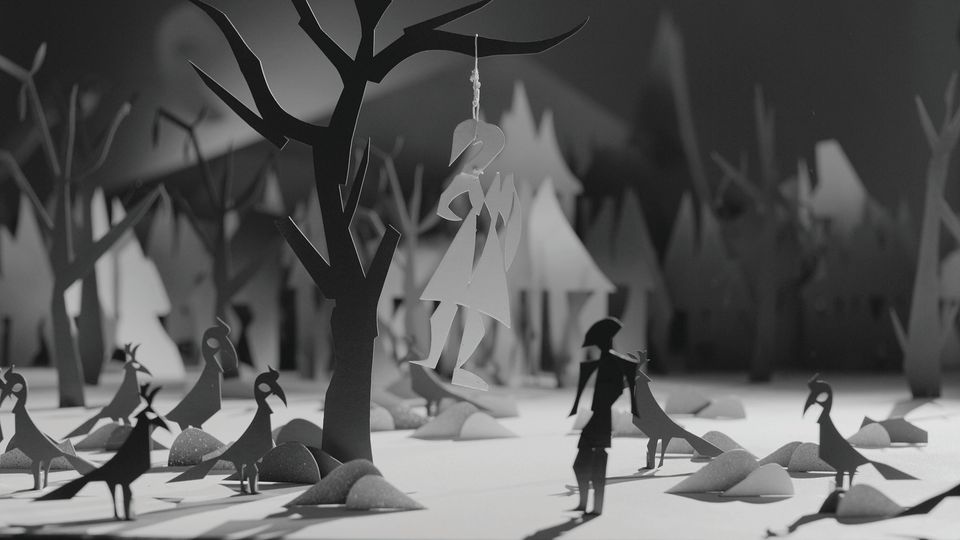 A still from Carlos Amorales' animated film The Cursed Village (2017), on show in the Mexican pavilion (Image: courtesy of Estudio Amorales and kurimanzutto)

Life in the Folds

Mexico’s pavilion at the far end of the Arsenale complex seems an idyllic setting. First impressions are misleading inside the historic Sale d’Armi, the site of the artist Carlos Amorales’ sculptural, film and musical installation, Life in Folds. What looks and sounds like a fairytale with a folkloric soundtrack is a much darker affair, abstract art meets film noir, in fact. The angular black shards are clay pipes, which musicians play at regular intervals, their strange shapes form an encrypted alphabet reproduced in framed wall texts. On a screen they become cut out figures in a forest, and there lies the twist. A fleeing family is shown being lynched instead of welcomed. Pablo León de la Barra, the curator who organised the pavilion, says that Amorales uses an abstracted language to express that such traumas happen around the world, “not just in Mexico or the US”. Candice Breitz, who is co-representing South Africa, has used a simple film technique, the talking-head shot, to create a complex, fractured narrative of lives lived in fear. In a darkened room in the Sale d’Armi, Arsenale, leading actors Julianne Moore and Alec Baldwin playing against stereotype recount the life stories of six people who have fled Syria, Angola and Somalia among other troubled regions of the world. One realised growing up that they were an atheist, a death sentence if discovered in their mainly Muslim home. Another you realise is a girl in India trapped in a boy’s body. Brietz’s interweaving of the narratives together with Moore and Baldwin’s unvarnished delivery is a compelling combination. Called Love Story, this is far from a Hollywood format. The original interviews are screened nearby. Brietz’s editing of the footage and space, and inspired casting, produces a genuine double-take.