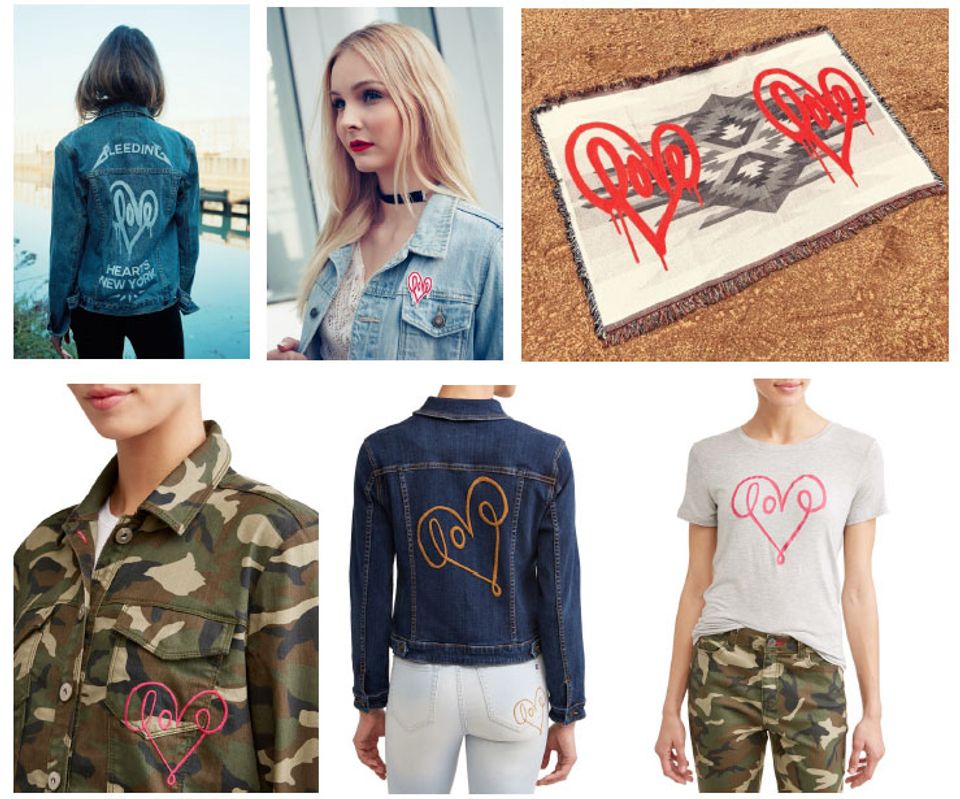 A street artist has filed a lawsuit against the US retail giant Walmart and celebrity Ellen DeGeneres for allegedly using his “love” design on a popular clothing line without permission.

In a complaint filed in a California District Court on Monday, Julian Rivera’s attorney says he is well known as the artist behind “a particular line drawing of a heart, resembling the word ‘Love’” that he has painted on a number of products over the years, including apparel. The artist sells pieces featuring the design on his online shop and he also uses it as a signature or logo on his art works, the complaint states.

Earlier this year, DeGeneres and Walmart teamed up to produce a line of clothes called the EV1 Collection, which features a similar heart-shaped design—minus Rivera’s signature spray-painted drip marks. The apparel was marketed on DeGeneres’s talk show, and the star said the collection was “rooted in love and spreading love”.

“Despite offers, he has very rarely made his original art available as part of corporate advertising campaigns—partly for artistic reasons but also because doing so would diminish the value of his work,” the artist’s complaint states. “Indeed, nothing is more antithetical to a street artist’s credibility than association with mass-market consumerism — of which Walmart is the epitome. People who recognized his design in the EV1 Collection would have concluded that Rivera ‘sold out’, diminishing the value of his work and reputation.”

According to the complaint, Rivera tried to stop the sale of the clothing with a cease and desist notice in May, and Walmart’s lawyers responded this month, “brushing off Rivera’s claims” saying that “it had not copied the Design, that its own graphic was quite different, and that the Design was only minimally creative”. Rivera is now suing for copyright infringement and unfair competition, and he is seeking damages and a recall of the offending apparel.

“This is no different than trying to rip off Robert Indiana's LOVE image," says Sam P. Israel, an attorney who handles art and intellectual property lawsuits. "Just because a street artist is not well known, celebrity TV hosts and discount retailers have no right to copy their work and put it on a T-shirt." He adds that social media has made street art widely visible today, and so artists "must be vigilant about protecting their work. If street artists aren't careful, they could unintentionally—and without being compensated—become associated with a major corporate brand.”

A spokesman for Walmart told the Hollywood Reporter in a statement that the company “respects the intellectual property rights of others. Once we are served with the complaint, we will respond appropriately with the court”.