Street art is on the rise at fairs—but does it undermine the point? 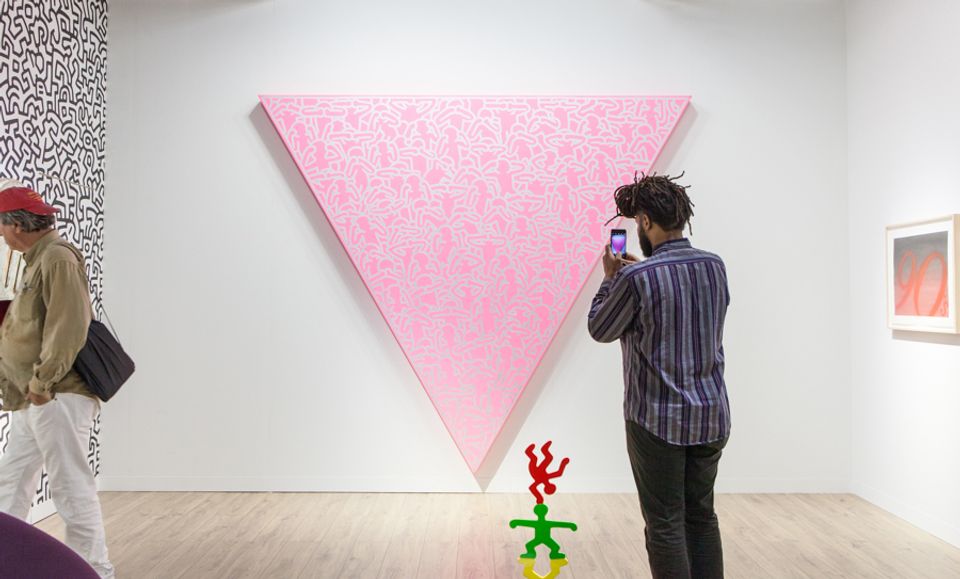 In 1986, the New York-based street artist Keith Haring opened his Pop Shop, making his art accessible to both collectors and children from the Bronx. “My work was starting to become more expensive and more popular within the art market… [this] meant that only people who could afford big art prices had access to the work,” he said.

Now, Lévy Gorvy gallery has recreated part of the artist’s Pop Shop, complete with original wallpaper, at Art Basel in Miami Beach (ABMB). The highlight is Haring’s hot-pink Silence = Death, painted in 1988, the year he was diagnosed with Aids. As we went to press, the work was on reserve for a European private collector for around $8.5m—a record for the artist.

The gallery’s co-owner Brett Gorvy considers Haring to be wildly undervalued compared with some of his peers, such as Jean-Michel Basquiat. “Part of the problem is understanding the work: what is an edition, what is an original,” he says.

Gladstone Gallery, which represents the Keith Haring Foundation, sold out its Haring mini-show at the fair’s VIP opening. Priced between $300,000 and $1m, the seven rarely seen pieces, dating from 1981 to 1990, include painted Japanese screens, a glass window and a terracotta vase.

Several street artists equally at home in a white cube are also at the fair, including OSGEMEOS at Lehmann Maupin, Madsaki at Perrotin and KAWS at Pace Prints. At Frieze London in October, Lehmann Maupin dedicated its stand to new, large-scale paintings and sculptures by OSGEMEOS ($130,000-$200,000); all sold to collectors from Austria, Japan, Miami and New York. At ABMB, a small untitled 2013 painting by the Brazilian twins sold for around $65,000.

Banksy’s work is a regular fixture during Miami Art Week. This year, the UK street artist is the subject of two “unauthorised” exhibitions: The Art of Banksy (Magic City Studios, until 28 February 2019), organised by his former agent Steve Lazarides and featuring more than 80 indoor pieces, and Saving Banksy Miami (Superchief Gallery, until 9 December), which centres on a giant rat he stencilled on a house in San Francisco in 2010. Until recently, his works were relatively inexpensive (less than £1m for a painting), but his shredding stunt at Sotheby’s in October, ostensibly intended to unsettle the market, has in some instances doubled his prices.

For some, the heavy marketing of street artists is an issue. The New York-based art adviser Lisa Schiff says that Pace Prints’ release of a KAWS edition of 100 prints at ABMB, which proved so popular among VIPs that the gallery had to run a lottery, “encourages pure speculation; it’s an empty value-making system”. The ploy netted the gallery $6.5m within ten minutes. Schiff says: “Street art should disrupt the commercial and institutional setting. I don’t want it in a museum or a fair.”

Although street artists are being recognised with museum shows (for example, an exhibition of Haring’s work is due to open at Tate Liverpool in the UK in June 2019), there is a lack of institutional critique of the movement. Jeffrey Deitch, who organised Art in the Streets at the Museum of Contemporary Art, Los Angeles, in 2011, says there is “a whole new tribe of artists who are exploiting the street-art aesthetic”. He adds: “I hope another museum does a rigorous show like mine and tries to set the standard again.”

For the Los Angeles-based street artist Shepard Fairey, who has a large mural at the entrance of Miami’s graffiti complex Wynwood Walls, “the fine-art and street-art worlds are not in conflict”. Creating pieces in the street “is an act of defiance”, but works in galleries “also have the potential to change minds”, he says. “Sometimes you can change the system from within.”