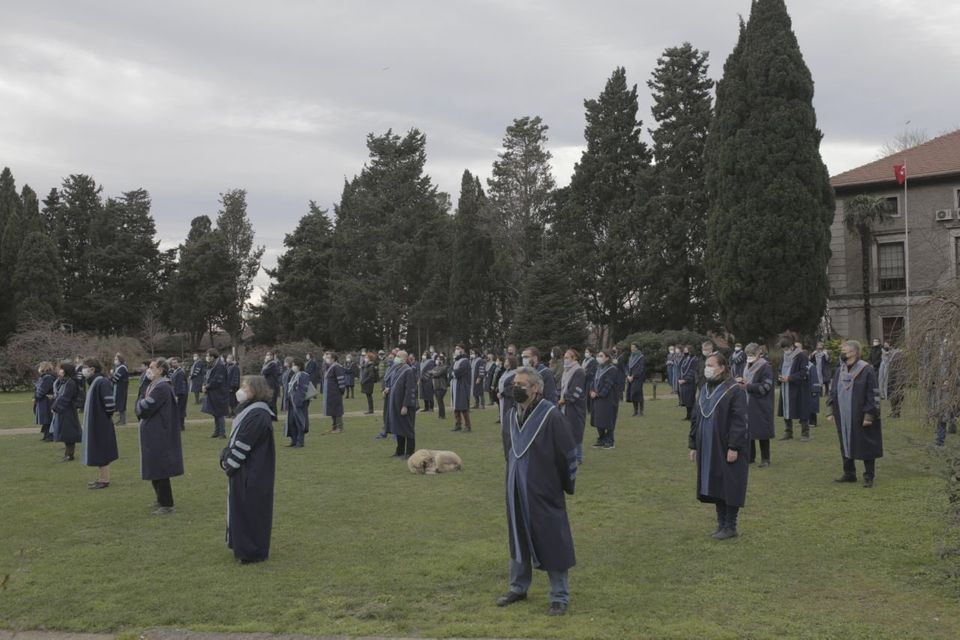 Turkish authorities have arrested five students over an LGBTQ-themed art work displayed at a protest exhibition at Istanbul’s Bogazici University.

The work depicted a mythical half-woman half-snake creature from Turkish folklore (known as a Shahmaran) at the centre of Islam’s holiest site in Mecca, the Kaaba.

The anonymous work was submitted via an open-call run by the student art collective BOUN Sanat Direnisi. The group said in a social media post that they timed the exhibition to coincide with mass demonstrations taking place on campus to protest against the government’s appointment of the university’s new rector, Melih Bulu.

Here's our statement video as Boğaziçi students regarding the latest misunderstandings about the exhibiton, which was followed by the arrests of two of our friends. We demand our friends to be freed, and the appointed rector to leave his position. pic.twitter.com/oSKiVY54WU

Critics say Bulu was appointed not on account of his academic track record, but due to his strong links to Turkey’s President, Recep Tayyip Erdogan.

"The goal behind these arrests is the weakening and silencing of our rightful protests,” said a student in response to the arrests in a video posted to social media.

The arrests have inflamed protests across the country and fuelled on-campus demonstrations this week, leading to the arrests of dozens more, according to videos posted on Twitter.

At 12.30, academics of Boğaziçi read their statement regarding the arrests. pic.twitter.com/tXNdbUf2cn

Bogazici University, one of Istanbul’s most prestigious schools famous for its liberal arts culture, has been a thorn in the side of President Erdogan and his religiously conservative base for years.

Since 2016, after a failed coup came close to toppling the president, Erdogan has arrested thousands of academics, artists and students.

Late last year, Turkish authorities detained Cihan Erdal, a Canadian permanent resident and PhD student at Carelton University in Ottawa. Erdal was arrested in Istanbul for signing an open letter in 2014, which called on the government to help the Kurdish town of Kobani, in Syria, against Isis attacks.

Erdal is concerned that his sexual orientation in addition to his support for the Kurdish minority could make him a target in prison. According to Human Rights Watch, Turkey demonstrates a "systematic basis" and a "repressive approach" on LGBTQ rights, which experts warn could result in increasingly hostile attitudes towards LGTBQ art and activism across the country.