Attempting to capitalise on the crossover collecting trend, the fourth edition of the Dutch fair brings in Modern and contemporary art to complement its historical focus

The fall edition of the ever-luxurious European Fine Art Fair (Tefaf) has quickly become a fixture of New York’s autumn art calendar since it launched four years ago to “renew interest in categories of historical art that have not received the attention they deserve” in the US, according to the then-chairman Willem van Roijen. This year, however, Art Deco design and 20th century art could be found sprinkled among the typical offerings brought by Old Master, armour and rare book dealers.

The introduction of more contemporary work to the autumn event, through 5 November at the Park Avenue Armory, is an interesting move for the Dutch fair—especially since Tefaf New York Spring, held in May, is already dedicated to Modern and contemporary art and has been highly successful in its own right. It raises the question of whether a strong US collector base can be captured with traditional historical wares alone.

Robert Landau, an international dealer in blue-chip paintings and sculptures of the first half of the 20th century and a member of Tefaf’s Selection Committee, supports the introduction of Modern and contemporary works to the fall fair whole-heartedly. Luring visitors to Landau’s generously sized stand is Henry Moore’s almost life-size black marble sculpture Reclining Figure: Curved (1977). The sculpture was shown at last year’s Masterpiece Art Fair in London, but visits New York for the first time since 1983 with an asking price of $35m.

“We need to show the Maastricht-Magic here. It is a mix of everybody,” he says, noting the original Netherlands fair has long paired old and new works together. Works by Modern and contemporary artists, like Lucio Fontana, were included in this year's edition of the fair. Photo by Kirsten Chilstrom

Galerie Zlotowski, showing an impressive wall of rarely available works on paper from the influential French “Purism” art movement, and Galerie Thomas are also among other newcomers offering modern works. At Galerie Thomas, the delicate and witty assemblages of wire mesh and clockwork by Günter Haese, who died in 2016, attract a lot of attention. Some sold within the first hours for up to $120,000.

Since its launch, Tefaf New York’s fall sales have often been slower to materialise when it comes to more traditional historical works. Indeed, several Old Masters dealers dropped out this year, though that may perhaps have more to do with a soft middle market and a lack of quality supply. Ultimately, “Americans are looking for good artworks they can immediately connect with,” says British dealer Nicholas Mullany, who’s booth is highlighted by two expansive 17th century tapestries from the workshop of Jan Raes, one of which is making its market debut in the US.

That does not mean sales for older works stalled completely, however. On the upswing is a demand for antiquities. “They are strong pieces, they survived all different ups and downs. They are survivors”, explains Basel-based dealer Jean-David Cahn. One of his highlights is the marble statue Dionysos with Panther, a very rare original from the Hellenistic period (around 300 BC) with an asking price in the range of $650,000. Cahn shares his booth with first-time exhibitor Mayoral from Barcelona, one of a surprisingly large number of dealers introducing Spanish art from all periods, starting with lately more appreciated polychrome Renaissance sculpture. 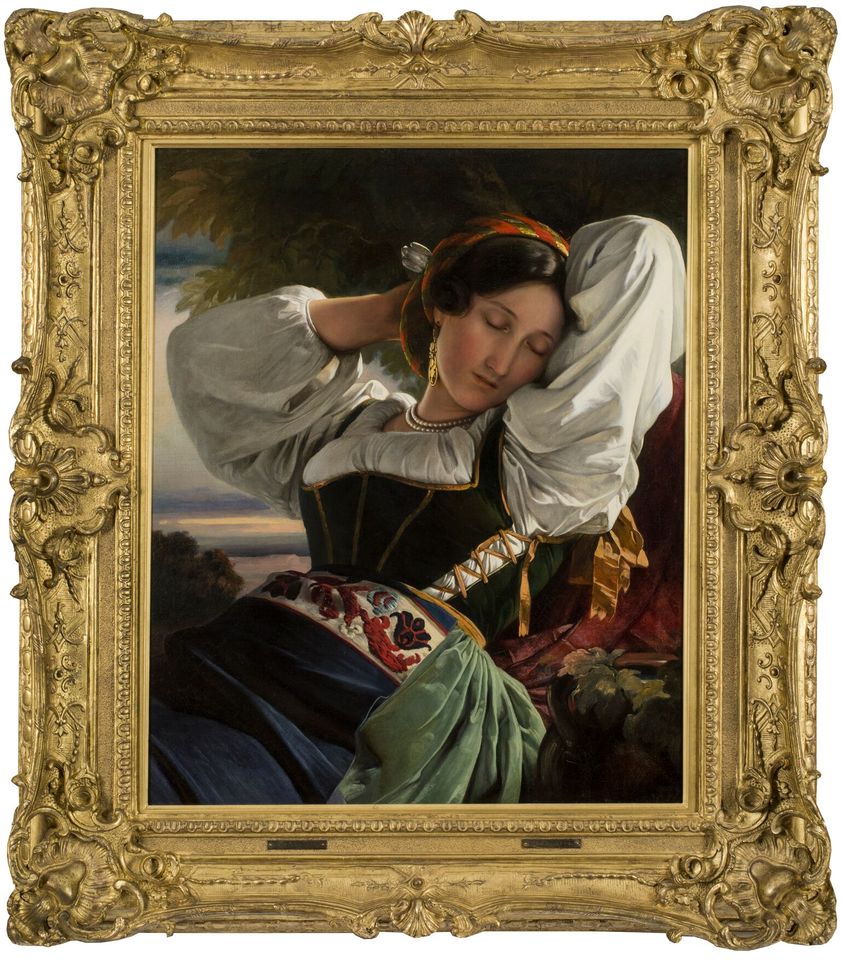 Girl from the Sabine Hills, an early work by 19th century German painter Franz Xaver Winterhalter, has a price tag in excess of $1m. Courtesy of Robert Simon

European art of the 19th century also has a strong presence, though works fared better at lower price points. “This is the only area, with its many subjects and styles, where a collector can truly buy a museum piece for under $1m,” says Eric Weider, a decades-long collector who, with support of renowned expert Polly Sartori, founded Gallery 19C in Beverly Hills two years ago. By the second day of the fair, he had sold Gustave Courbet’s Normandy landscape ($175,000) and a large outstanding watercolour by little known Dutch-Anglo illustrator Nico Jungmann ($50,000).

The asking price of a spectacular painting like the Girl from the Sabine Hills at Robert Simon’s booth, an early work by 19th century German painter Franz Xaver Winterhalter who was later associated with fashionable court portraits, reaches easily beyond $1m. It once belonged to Düsseldorf art dealer Max Stern and is now being sold on behalf of the Dr. and Mrs. Max Stern Foundation, Montreal, though it has yet to find a willing buyer.