The arts festival erupting in the middle of the Atlantic Ocean 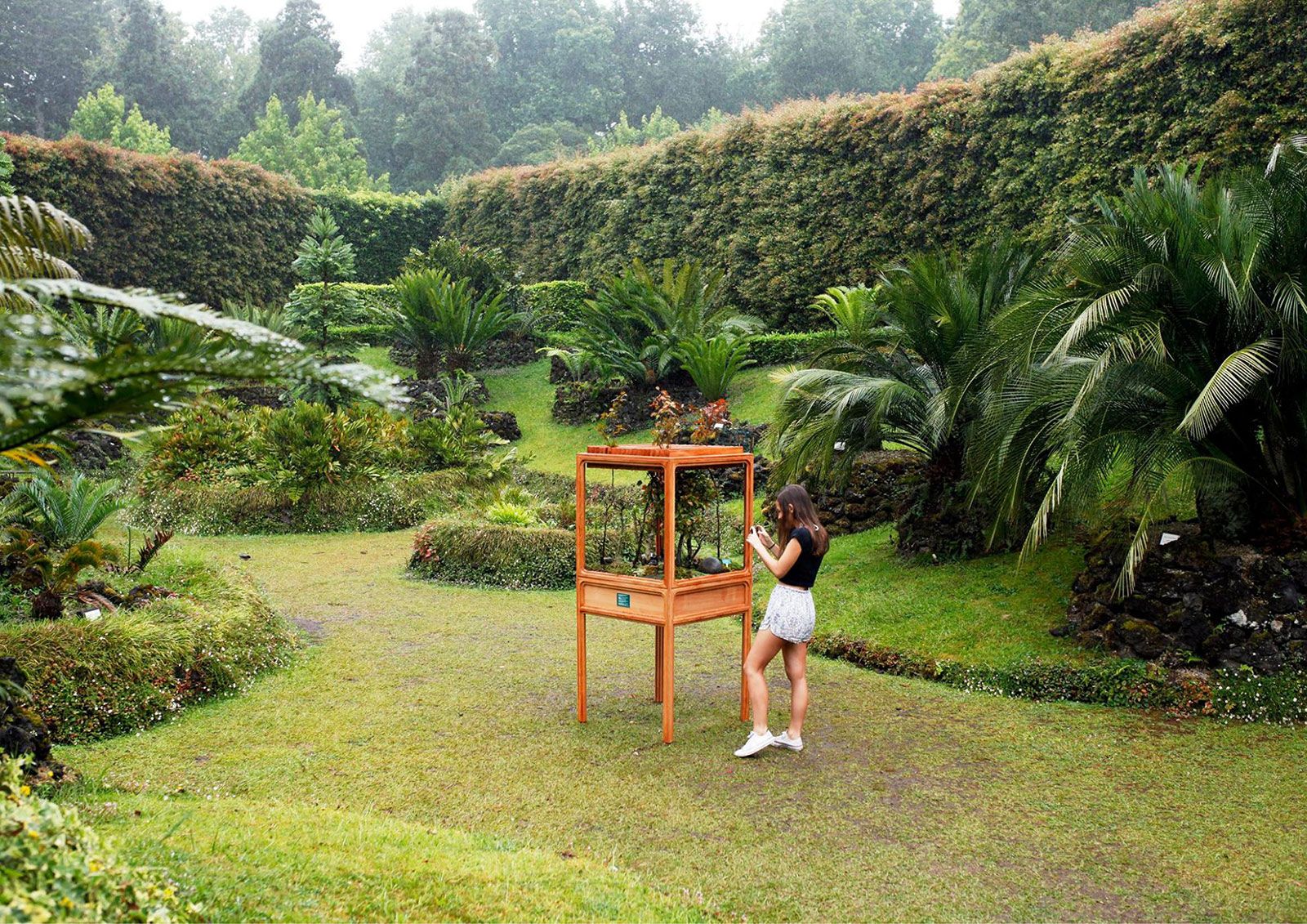 How does an international arts festival end up on a small island in the middle of the Atlantic Ocean? For the first edition of the Walk & Talk festival in 2011, its artistic director Jesse James and fellow co-founder Diana Sousa wanted to bring “just one artist” to Ponta Delgada, the capital of the Portuguese Azores islands.

Now, in its seventh edition, the festival (until 29 July) has grown with more than 70 participating artists, from around the world and working across different disciplines. The festival includes exhibitions, performances, public interventions, residencies, workshops and more, all concentrated over two weeks in July.

The founders, James and Sousa, grew up in the Azores but both left to study in mainland Europe. On returning in their early 20s, they wanted to bring back some of the culture they had been exposed to and also showcase what the islands had to offer.

The festival has become a way of “presenting the Azores in a different way, beyond lagoons and whales and dolphins”, James says. Although he admits that “the exoticism of the location—I hate the word—[makes it easier] to invite people”. 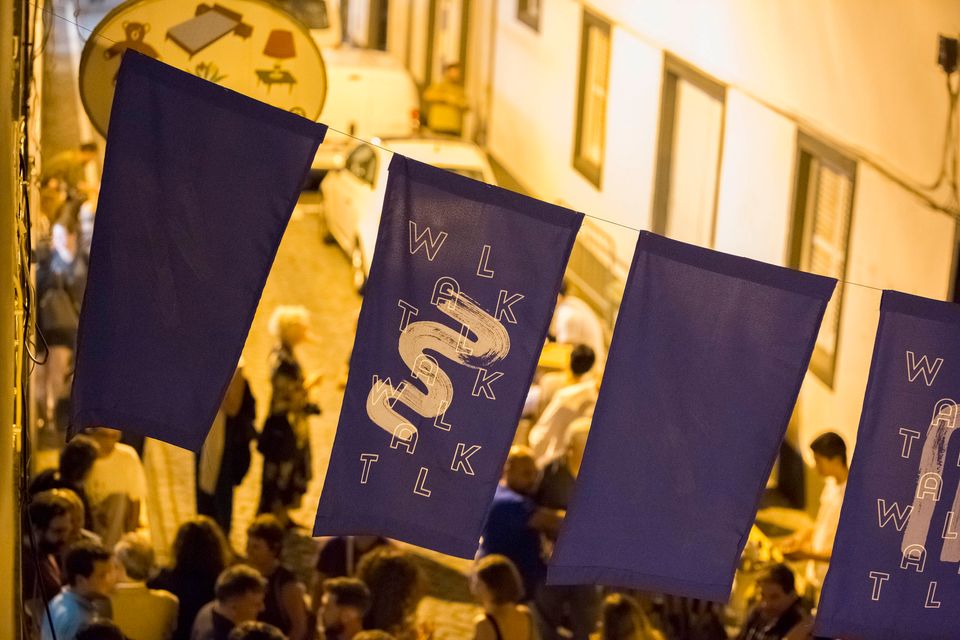 The first edition went from the idea of just inviting the Portuguese street artist Vhils—now one of urban art’s biggest names—to having over a dozen artists create “20 murals in two weeks”, James says. The suggestion to invite more artists came from the local Azorean government.

James says he and his small team thought “we should just occupy public space” and street art was the most direct way of doing that. Following the relative success of the early editions, “art became—for the first time that I can recall—a conversation on the streets [of Ponta Delgada]”, James says.

This year there is only one street artist, Spy from Madrid, who is part of the Public Art Circuit, co-commissioned by the Lisbon- and Copenhagen-based KWY group. The festival started to move away from urban art in 2013 as they felt “every city had a public arts festival” and street art was just being used as a form of “beautification”, James says.

A turning point in the way the festival was run came during the 2013 edition when they had their first residency, the choreographer Victor Hugo Pontes, working with a local dance group called 37.25 (named after the main island of Sao Miguel’s coordinates). “[We realised] this is the model that we need. [Pontes] is sharing knowledge with the dance group,” James says. Over the subsequent years, different artists-in-residence have worked with the group and now 37.25 are organising their own dance festival, James says. 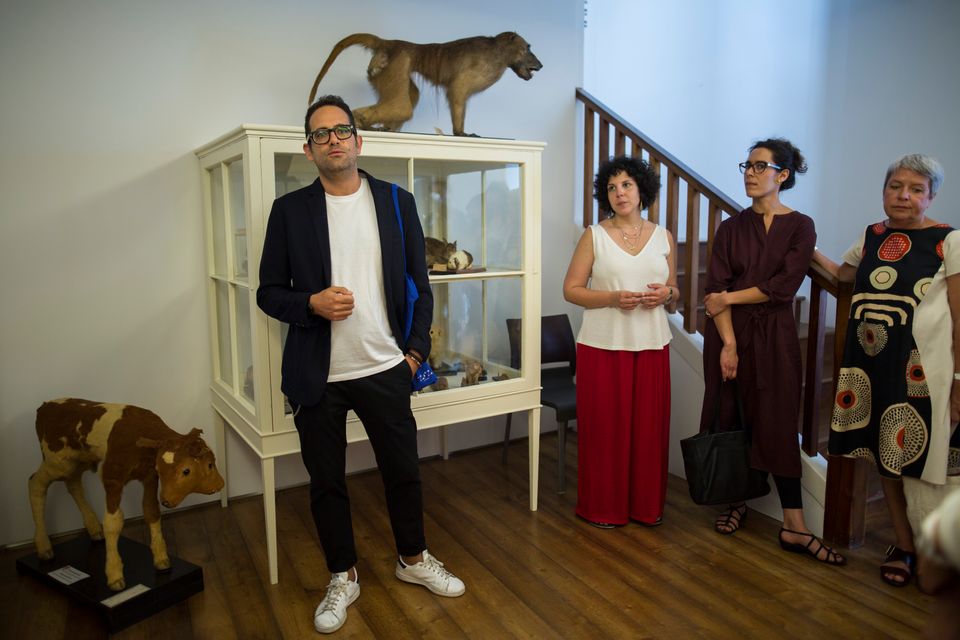 Walk & Talk currently runs multiple residencies, with artists staying on the island during the festival with a view to exhibiting at the next edition. At the recently reopened Carlos Machado natural history museum, the Portuguese artist Joao Paulo Serafim’s new show, Naturalis Historiæ: When Was a Crocodile First Seen in the Azores? (until 12 September), includes installations and photographs taken during the museum’s refurbishment while Serafim was based there during his residency two years ago.

Among the current artists-in-residence is the photographer Pauliana Valente Pimentel, who will be working with the inhabitants of one of the island’s fishing villages, one of its most deprived areas, as well as with its “high society”, she says. The show of her works next year will take place in the Azores’ only commercial gallery, Galeria Fonseca Macedo.

Alongside the longer residencies, the Public Art Circuit also acts as a basis for short-term stays. This year’s nine projects unfold during the festival, with some not due to be completed until the final days—a relic from its street art days of “working and presenting simultaneously”, James says. Many of these pieces end up becoming permanent works.

One of this year’s projects, by the Canadian artist Mark Clintberg, plays on the unique position of the nine islands that make up the Azores. They are almost an intermediate, “queer space”, he says. Part of Europe but classified as being on the ultra-periphery, 900 miles from the national capital of Lisbon. Clintberg is creating a fictional, liminal space that is advertised but will never open, called Intermediario (intermediate), replete with advertising and signage.

Another public work is Nordic Miniature (2017) by the Berlin-based artist duo Benandsebastian. This vitrine of diminutive imported trees situated in the grounds of the Terra Nostra botanical park is a nod to the island’s historical location on trade routes and fertile climate. 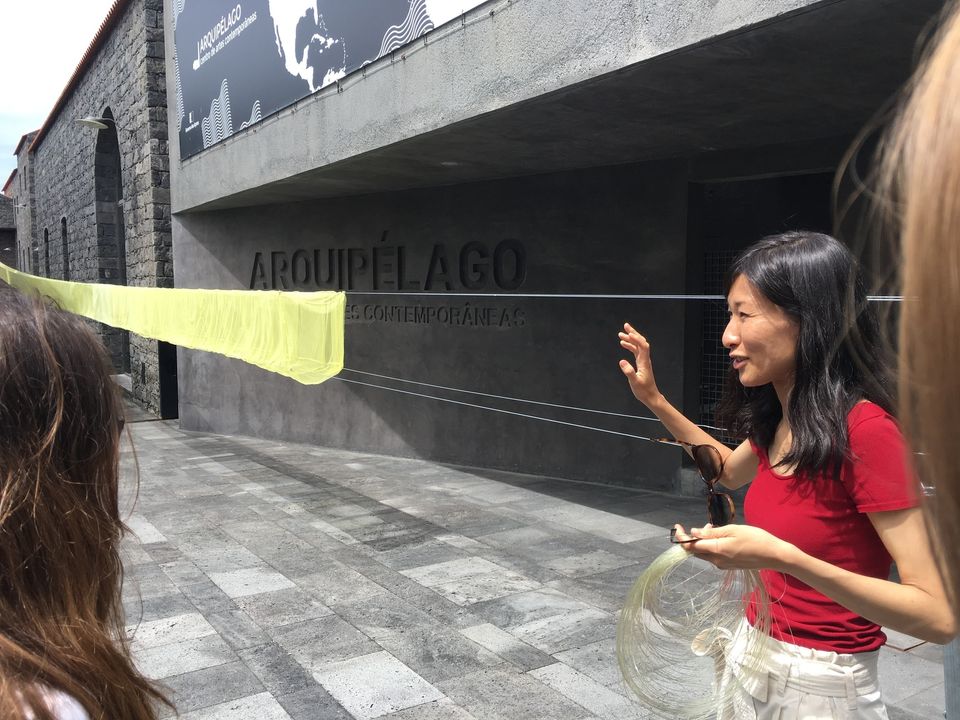 On the other side of the island, the Stockholm-based, Japanese artist Akane Moriyama has made a 70m-long fabric installation, titled Azorean Spectrum Range (2017), running between the basalt buildings of Arquipélago, a €13m contemporary art centre that opened in 2015. The building, nominated for the Mies van der Rohe architecture award, is a world-class venue for the arts and is a vast investment on an island with a population of less than 140,000. “We hardly even have anything like this in Berlin,” says Sebastian de la Cour, one half of Benandsebastian.

Walk & Talk’s main venue is less monumental. Having lost their previous temporary space at the last minute, this year’s central hub is a former supermarket in the city centre, where the main group exhibition, Message in a Bottle (until 29 July) is being held. Many of the performances, as well as artist-led workshops with local teenagers also take place here.

On the same street is a pop-up canteen where the artists, organisers and visiting press eat together. As with the festival as a whole, James is keen to take “out the boundaries between disciplines”. It is important that “even if they don’t collaborate [artistically], that they mix”, he says. “This diversity is quite important,” James says, as audiences and different artistic disciplines rarely overlap at most festivals, biennials and art scenes in major cities such as Lisbon or London.

The main festival funders are the Azorean government and Mailchimp, supplemented by several smaller organisations. “Thirty percent of the budget is in kind: car [rental], insurance, flights etc.,” James says.

The ambitious mix of disciplines and a local audience slowly getting used to some of the more challenging content means that sometimes things do not go to plan. But as artists at Walk & Talk “you are entitled to fail”, James says. “The idea of failing is important, not only [for the] artists, but us [as an organisation] and the audience.”

As for the future, James hopes that it “becomes a reference point both nationally and internationally”, and despite a limited marketing budget to spread the word, the artists who visit are becoming “like ambassadors”. Even though the islands are on the periphery of Europe, they are also centrally located between Europe and North America, attracting visitors and artists from both.

James says finally that he only wants to continue leading the festival, along with his current co-director Sofia Carolina Botelho, “until the tenth edition [in 2020], then I think it has to pass onto someone else”. He will be 32.