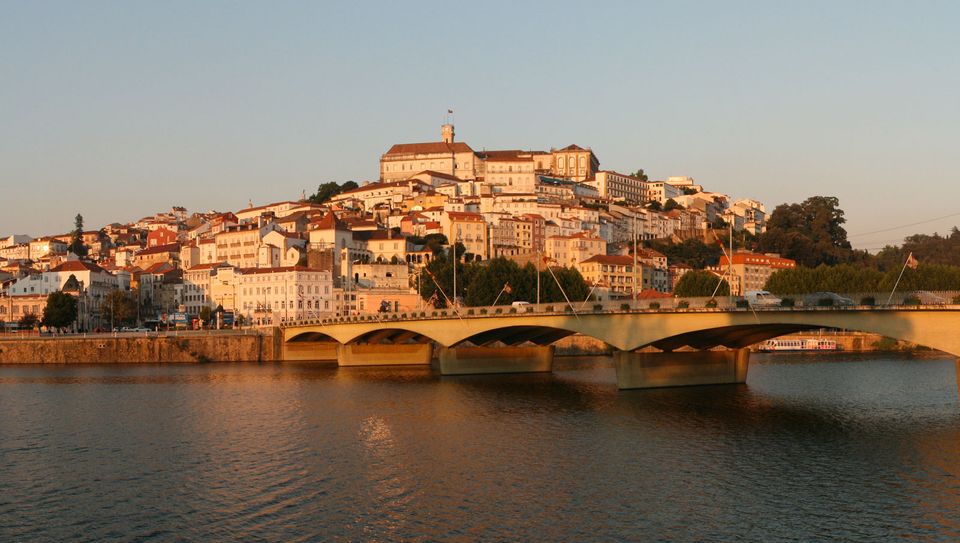 The Anozero biennial in Coimbra was founded in response to part of the Portuguese city being designated a Unesco World Heritage site in 2013. It was important to look at “how that [designation] might constitute a challenge for contemporary art, rather than being a problem,” says Carlos Antunes, the biennial's co-founder and director of Círculo de Artes Plásticas de Coimbra. Antunes, as well as his partner and associate biennial director Désirée Pedro, both trained as architects and are familiar with how such a designation can stifle a city. “We think that artists can bring new readings to these spaces,” Pedro says. To the couple’s surprise, both the local council and the university—one of the oldest in Europe, which still holds significant sway in the city—backed the biennial straight away.

The third edition of Anozero, titled The Third Bank (until 29 December), features 39 artists, including Steve McQueen, Susan Hillier, Anna Boghiguian and Alexandra Pirici, spread across ten sites in the city. The artists were selected by the Brazilian chief curator Agnaldo Farias with associate curators Lígia Afonso and Nuno de Brito Rocha. Among the 20 new commissions at the biennial are Boghiguian’s installation ABC of Life (2019) and Meriç Algün’s The Library of Unborrowed Books, Section IX: Biblioteca Geral da Universidade de Coimbra (2019), for which the artist has gathered all the unborrowed books from the university library’s short stories section.

Farias, who has in the past worked on the Bienal de São Paulo, says that curating on a smaller scale is much more satisfying now that he and his fellow curators are able to work closely with each artist. “If it had been big, I would not have accepted the invitation,” he says. The São Paulo biennial included “160 artists, with 39 artists you can follow the work of each and every one—with 160 artists it is impossible.” 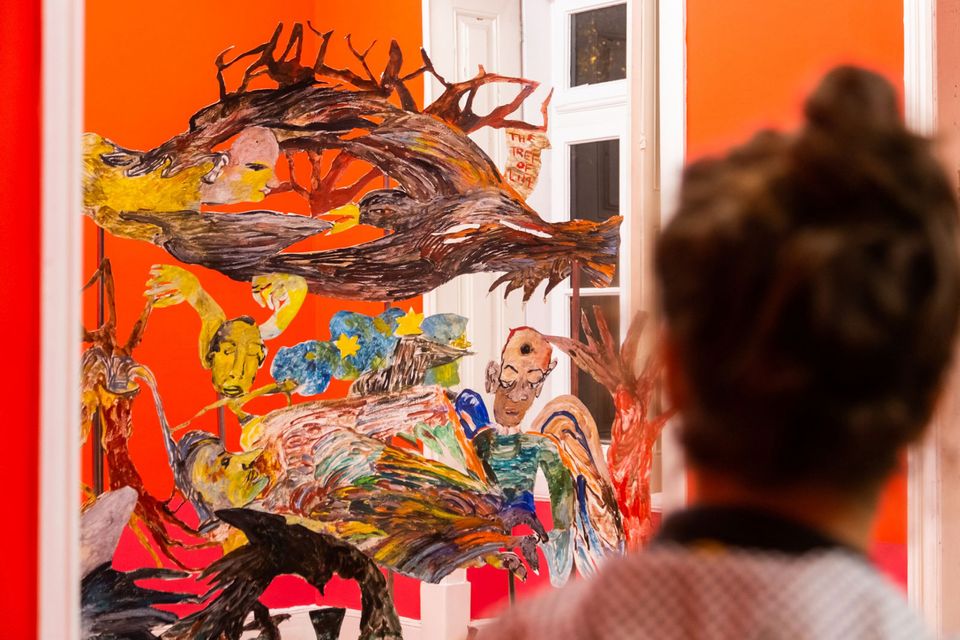 The biennial’s title and theme come from a book by the Brazilian author João Guimarães Rosa, where the protagonist leaves his family and takes up residency on a small boat in the middle of a river. “The presence of the river in Portuguese culture is very strong,” Farias says, and Coimbra’s river Mondego and its historic flooding has shaped the city. In the 17th century, floods drove the inhabitants of a riverside monastery uphill to establish the Monastery of Santa Clara-a-Nova. The vast building, which later became a military barracks and was subsequently abandoned in the late 1980s, was brought back to life by the biennial ahead of the 2017 edition and is this year’s main venue.

Among the works on show in the old monastery are David Claerbout’s The Pure Necessity (2016), where the artist de-anthropomorphised Disney’s The Jungle Book; Maria Condado’s site-specific wall paintings that embrace the old building’s damp walls; Erika Verzutti’s specially-commissioned Mineral (2019) sculptures; and a 16mm film installation by João Maria Gusmão and Pedro Paiva. The Portuguese duo were the first artists to be selected for the biennial, Farias says, partly because he felt he owed it to them after they missed out on a well-known emerging artist prize that he was judging several years ago (he argued that they should win, but another better-known artist got the award, he says).

One of the principal aims of the biennial is to reclaim, repair and reanimate, abandoned or forgotten buildings in the city. “That is fundamental [to the biennial],” Antunes says, and there are plenty of abandoned buildings awaiting the biennial’s magic touch. “It can be a symbolic act of repair; that’s why we decided to go from that monster [of a building in 2017] that is 300m long, to a little fountain,” Antunes says. This year’s restored building is the Manga Fountain, an example of Portuguese renaissance architecture that will house an archival sound piece of 16th and 17th century compositions later this week. 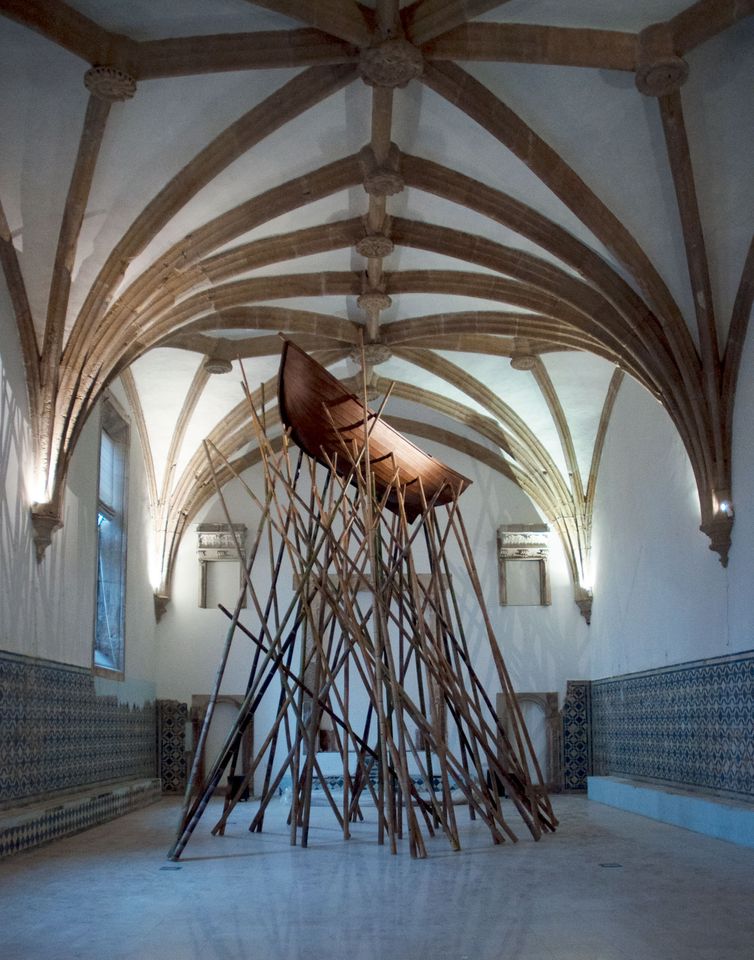 For the inaugural edition in 2015, a former refectory for the Santa Cruz Monastery was regenerated after the biennial invited the Portuguese artist to Pedro Cabrita Reis to rip apart its dated museological displays and make a temporary installation. Once the installation was dismantled, the space was returned to its former glory and this year houses Sonhos de outubro (2014–2019) by the Brazilian artist José Spaniol, which is an installation of a boat seemingly stranded after floodwaters have receded.

But the greatest accomplishment of the biennial so far has been the rehabilitation of the aforementioned 9,650 sq. m Monastery of Santa Clara-a-Nova (around the same size as the recent MoMA expansion). The building had lain abandoned for two decades before the biennial took it over (its garages still had cars used by Portugal’s secret police during its dictatorship, which were incorporated into a 2017 installation by Rubens Mano). The government is currently looking for private developers to take over the space and, most likely, convert it into a hotel as part of its “Revive” programme. But part of the main monastery and several outbuildings on its 14-hectare grounds have been promised to the biennial by the state. “At this point in time, it is no longer an abandoned building that is being transformed into a hotel, but a building that has a biennial that might be removed for there to be a hotel,” Antunes says. “It is building that hosts a biennial, which is by definition a place of inclusion [and is] the opposite of a five-star hotel that is a place of exclusion, a place for rich people,” he adds. 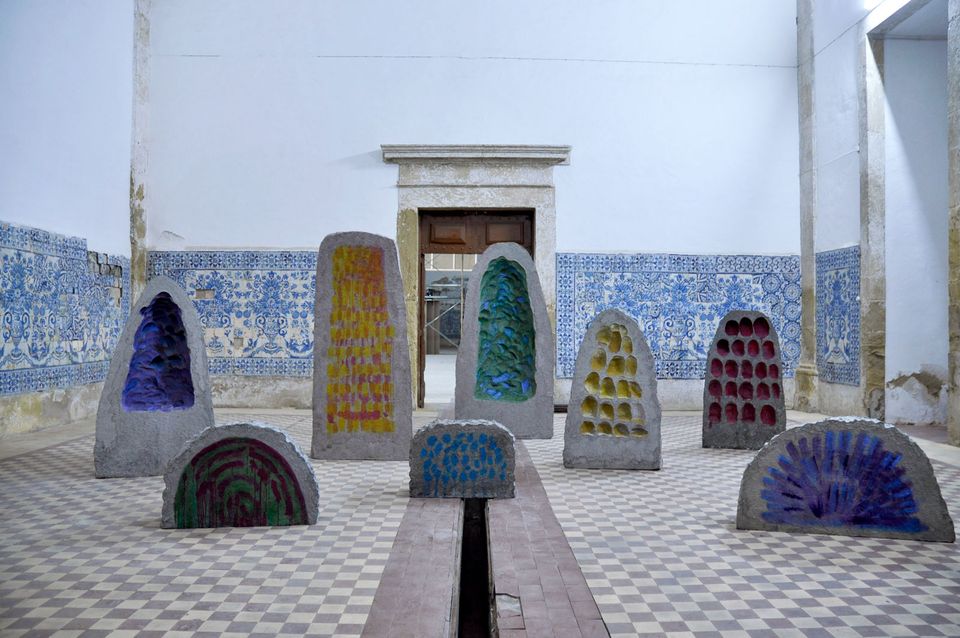 Except for a few years during his childhood in Angola, Antunes has lived almost all his life in the city and is adamant that in order to create a successful and internationally important biennial, the focus must always be on the local. “It not the provincial side of the local, but the global side of the local,” he says. “I know it’s a complicated game, a game that can quickly unravel into the parochial. But I also think that it can be the most universal thing in the world if we value the singularities of that which is close to us,” Antunes says.