The complicated history of the first monument to Sacajawea, funded by suffragists and designed by a woman The Sacajawea and Jean-Baptiste sculpture in Washington Park, Portland was funded by women, sculpted by a woman artist, and conceived to promote women’s suffrage. And yet the monument to the Lemhi Shoshone guide tells a conveniently limited version of her story Photo: Simon Cobb

Fifteen years before the 19th amendment was ratified, granting American women the right to vote, suffragists representing all 50 states gathered in Portland, Oregon to erect a monument to a woman who cast a historic vote. The impressive 34-foot tall copper statue of Sacajawea, the Lemhi Shoshone guide who helped the Lewis and Clark Expedition during its exploration of America’s western territories, was intentionally symbolic: it memorialised an individual woman, was funded by women, sculpted by a woman artist, and conceived to promote women’s suffrage. And yet this first-ever monument to Sacajawea tells only a conveniently limited version of her story.

The suffragists “had no apparent awareness of how deeply offensive it was to elevate Sacajawea as the great foremother of pioneer women when those women and European culture destroyed Indigenous land, culture, people,” explains the art historian Bridget Quinn, who researched this monument for her recent book on women’s suffrage, She Votes. “Oregon suffragists basically appropriated Sacajawea for their own ends, yet they also were sincerely stirred and inspired by her example.”

The sculpture Sacajawea and Jean-Baptiste (1905) was erected in July 1905 on the joint occasion of the 37th National American Woman Suffrage Association Convention and the Lewis and Clark Expedition centennial. Only four states granted women full suffrage rights by that point, with Oregon scheduled to vote on the issue the following year.

“We pay homage to thousands of uncrowned heroines,” said the suffragist Susan B. Anthony at the unveiling ceremony. “This is the first time in history that a statue has been erected in memory of a woman who accomplished patriotic deeds.”

Sacajawea’s role in the Lewis and Clark Expedition was overlooked for decades, but popularised at the turn of the 20th century by the bestselling novel by the Oregonian writer and suffragist Eva Emery Dye. Her book, The Conquest: The True Story of Lewis and Clark (1902), described the expedition corps voting on where to spend the winter of 1805. The votes cast by Sacajawea and York, the group’s only Black member who was enslaved, were also counted.

Dye later led the Sacajawea Statue Association, which raised funds by selling Sacajawea buttons and spoons. They ultimately collected $7,000 and chose the Colorado-based sculptor, Alice Cooper, to create the monument. “I love that they raised the money, then hired a woman artist,” Quinn adds. “That strikes me as revolutionary in itself.” 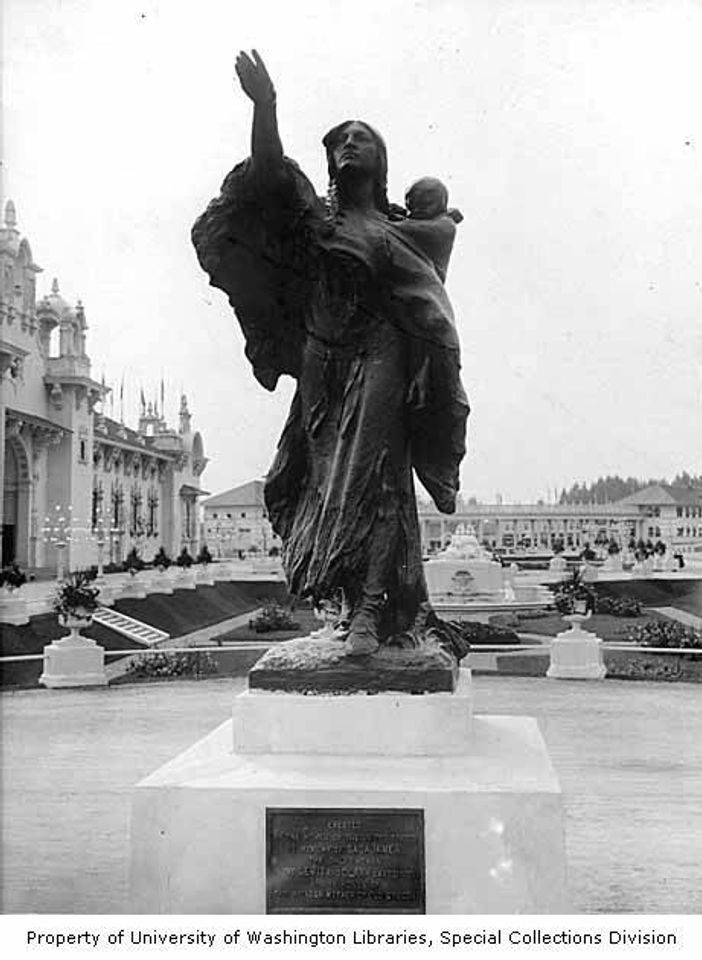 The Colorado-based sculptor Alice Cooper constructed the statue with more than 20 tons of Oregon copper. It stood in the center of the Sunken Gardens on the grounds of the 1905 Lewis and Clark Exposition in Portland. In April 1906, the statue was moved to Washington Park University of Washington Libraries, Special Collections

Nonetheless, the suffragists championing Sacagawea as an exemplar of a woman with voting agency framed her life through a limited lens.

“You want to applaud [them] because there’s a sort of movement towards acknowledgement,” says the contemporary Portland-based artist Wendy Red Star, who is of Apsáalooke descent and currently has a solo exhibition on view at MASS MoCA. “There’s still so much that just seems, to me, very much like a fantasy. Sacajawea, Pocahontas—they’re these Native women that society used, in a way. But it was towards the colonial agenda, and it worked.”

Sacajawea, the daughter of a Shoshone chief, was captured by a rival tribe around age 12 and sold to the French-Canadian trapper Toussaint Charbonneau. Charbonneau made her one of his wives, and she was pregnant with their first child when she was chosen to accompany Lewis and Clark’s expedition. She joined the corps in February 1805 with her two-month-old son in tow. Sacajawea’s maternity was part of her appeal to suffragists, who wanted to assert that women could be both nurturing mothers and publicly active.

During the expedition, the corps encountered a Shoshone group led by Sacajawea’s brother, Cameahwait, but she was not allowed to remain with her long-lost family and instead continued westward with the corps. She may have voted on where to camp for the winter, but Sacajawea lacked a say in so much of the rest of her life.

“What options did she have? She didn’t have any options. That’s why I feel like it’s a fantasy,” Red Star continues. “Her story has not been written, and that would be fun. To give her a new story.”

about 9 hours ago
‘The house needs a cleaning’: Women artists gather to show the path forward on inauguration day