The Cranachs and Luther, a beautiful friendship: Joachim Whaley on the Luther Decade

Three major shows devoted to Lucas Cranach the Elder (1472-1553) and his son, Lucas the Younger (1515-86) in the German state (Land) of Thuringia bear the same main title and they form part of the same complex of commemorations. The theme Bild und Botschaft—Image and Gospel (or Message)—relates to the wider context of the forthcoming quincentenary of the Reformation in 2017 as well as the quincentenary of the birth of Cranach the Younger in 2015.

Preparations for the 2017 Reformation anniversary began some years ago and the celebration of what was envisaged as a Luther Decade is already well under way. The prelude in 2008 was the commemoration of the quincentenary of Martin Luther’s arrival in Wittenberg. Since then, every year has been devoted to a specific theme. This year’s theme is image and Bible. In 2016 the wider Protestant world will be remembered. (The full schedule and its associated activities is outlined on a dedicated website.) 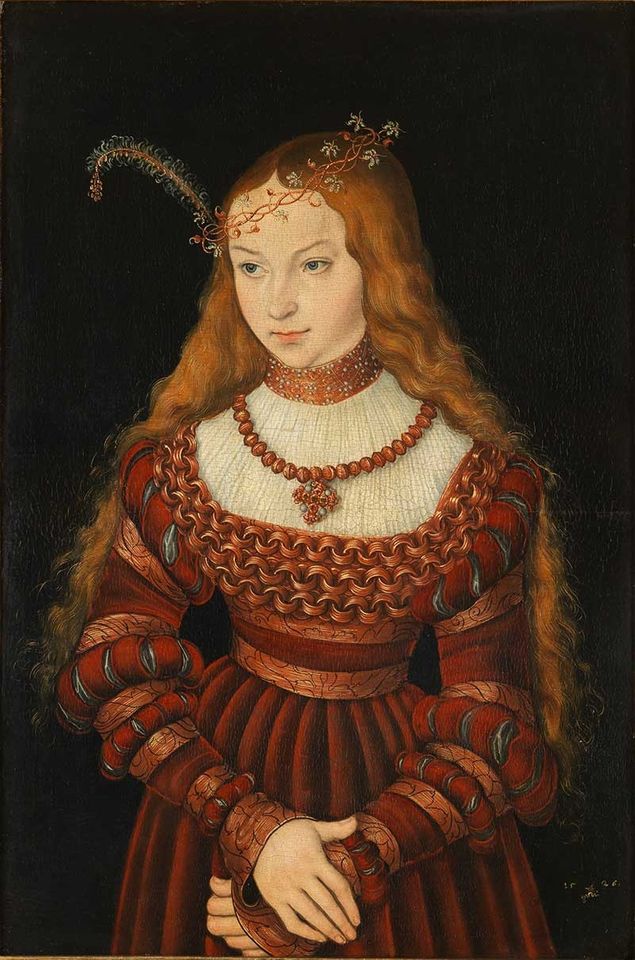 The elder Cranach had been hired by Frederick the Wise, Elector of Saxony, as court painter in 1505. In doing so, he was hiring an already established and highly regarded painter whose years in Vienna (1501-04) had brought him into contact with Albrecht Dürer and Albrecht Altdorfer. Even if Cranach had painted nothing after 1504, his place in history would have been secure. What he went on to produce from 1505 until his death in 1553 was, however, extraordinary.

As court painter, he naturally produced portraits of the entire ruling family. He also painted works – landscapes, but above all allegorical pictures and nudes – for the family’s private apartments, or altarpieces and devotional works for churches. There were numerous private commissions locally and requests from neighbouring dynasties. Cranach soon established himself as the leading portraitist of his time.

Cranach’s energy and versatility, and his entrepreneurial zeal, were quite staggering. Not content with his own artistic creations, he employed a workshop to finish off or copy key works for distribution to other parts of the Ernestine territories or to other allied dynasties. He promoted the career of his elder son Hans, who died young, and employed his second son Lucas, who ultimately took over the workshop and managed it until his death in 1586. By the time the workshop was dissolved around 1590, some 5,000 paintings had been produced, in addition to woodcuts and prints, and illustrated books. And, as if art were not enough, the elder Cranach also owned property, carried out diplomatic errands for his master, bought works of art for him and supplied the court with wine and paper. 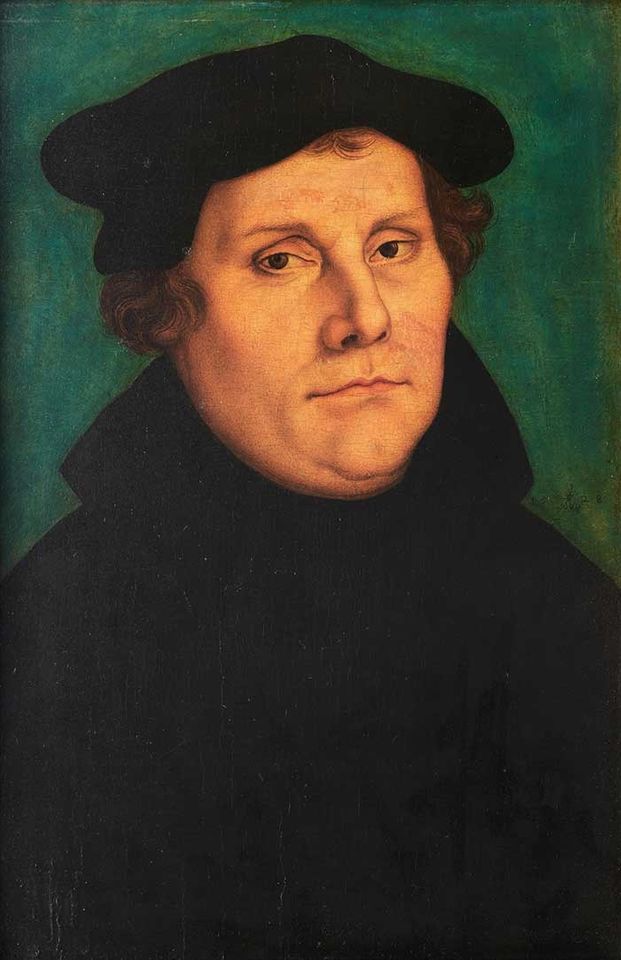 Martin Luther as a monk (1520) by Lucas Cranach the Elder. © Klassik Stiftung Weimar

Being the employee of the most important Elector of the Holy Roman Empire was prestigious in itself. But the emergence of Luther transformed Cranach’s world. Frederick the Wise himself remained loyal to his Catholic faith and may only have “converted” on his deathbed in May 1525. Yet his protection of his subject Martin Luther against the writ of Charles V was crucial to the emergence of Protestantism. Likewise Frederick’s successors, his brother Johann the Constant (the elector of Saxony from 1525-32) and his nephew Johann Friedrich the Magnanimous (the elector of Saxony from 1532-54), were the most important protectors of Protestantism.

Indeed the latter risked and lost everything in the defence of his faith and his liberty against Charles V’s attempt to restore the Empire to Catholicism. In 1547 he forfeited the electoral title which was transferred to his kinsman Duke Moritz in Torgau, who had taken the Emperor’s side, as well as Wittenberg and other lands. A death sentence was commuted into life imprisonment, from which he was released after five years with permission to style himself duke and “born Elector of Saxony”.

It is not known precisely when Cranach embraced the new Reformed teaching. He certainly became a personal friend of Luther as early as 1520 and created his first image of him, a print, in that year. The first painted portrait was executed in 1522. Until Luther’s death in 1546 there was a never-ending stream of prints and paintings and, from the late 1520s, a close cooperation in the production of a new iconography for the emerging Protestant church. They collaborated in the production of images deliberately designed to underscore the difference between the old faith and the new. Cranach remained loyal to Luther and to his employers. Luther never allowed anyone else to draw or to paint him. If we know today what Luther looked like, it is by virtue of the Cranach portraits. 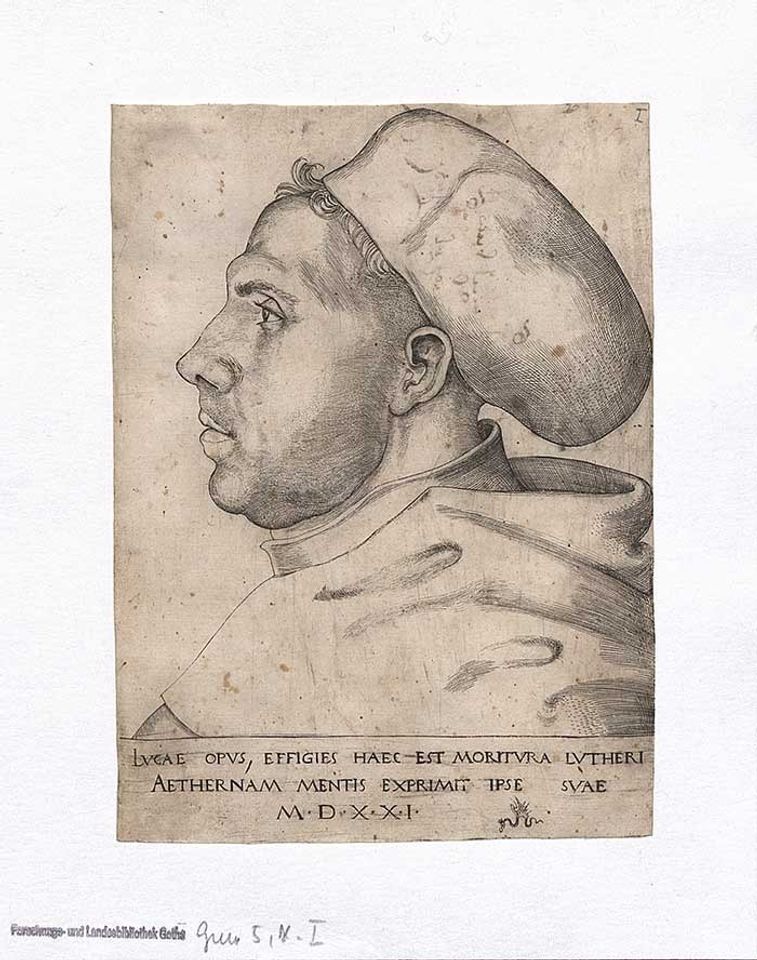 Cranach also continued to serve his employers to the last. It is true that in 1547 he declined to follow Duke Johann into captivity. But in 1550 he joined him again – still a captive of Charles V – in Augsburg, where he also painted Charles V and met Titian. On the duke’s release two years later, Cranach accompanied him to his new court at Weimar, where he died the following year. Cranach’s iconographical commitment to both Protestantism and the Ernestine dukes remained undimmed. By contrast, the workshop, under the management of Lucas Cranach the Younger since 1537, remained in Wittenberg; its Protestant orientation endured, but its portraiture now focused on the new Albertine Electors of Saxony in Torgau (Dresden from 1550).

The loss of Wittenberg in 1547 and the establishment of a new court in Weimar, along with others later at Coburg, Eisenach, Altenburg and Gotha others, are the key to the three Thuringian Cranach exhibitions. The Ernestine dukes’ collections of Cranach paintings and works on paper, and works by Cranach that adorned many of their churches, were constant reminders of their historical role as the first leaders of Protestantism, and the three exhibitions in Thuringia that concentrate on the work of Lucas Cranach the Elder occupy a special place among the Cranach shows on offer this year.

Joachim Whaley is Professor of German History and Thought at the University of Cambridge and a Fellow of Gonville and Caius College. He is the author of Germany and the Holy Roman Empire 1493-1806, two volumes (2012).