The man who spent 40 years preserving Palmyra’s past

The ancient city of Palmyra was captured by Isil in May 2015. The Islamic extremists not only blew up Roman buildings and destroyed monuments at the Unesco World Heritage Site, but also murdered the 83-year-old archaeologist Khaled al-Asaad, Palmyra’s long-time head of antiquities. The Russian-backed Syrian army retook the city in March.

Among the first archaeologists to return to the 4,000-year-old city and assess the damage were two scientists from the University of Warsaw. They are part of a Polish team that has excavated at the site since the late 1950s, working continuously until 2011, shortly before the civil war broke out. We spoke to the archaeologist Michal Gawlikowski, one of the world’s leading experts on Palmyra who has led the Polish team since 1973, about what is lost, the case for restoration and his memories of Khaled al-Asaad.

The Art Newspaper: How did the Polish team’s work in Palmyra begin?

Michal Gawlikowski: We started working there in 1959 and finished in 2011. Of all the teams working in Palmyra, we’ve been there for the longest uninterrupted period.

The mission was begun by Kazimierz Michalowski [1901-81], who was my teacher at the University of Warsaw. In the late 1950s he was working in Egypt, which at the time was in a union with Syria, under the short-lived United Arab Republic. The Syrian government approached him about working in Syria and so he set off to Palmyra, which was the most promising site in the country. Michalowski continued with his excavations even after the union ceased to exist. I took over in 1973.

Trouble started brewing in southern Syria towards the end of our last mission in 2011 but war hadn’t broken out yet. Still, you could feel that it was going to get a lot worse and we were beginning to worry about getting out of the country. We managed to leave on the last day of May and very quickly it became impossible to go back.

But there is still so much to do. I would say that around 80% of the ancient city is unexplored and awaits future excavations.

What were some of your team’s key discoveries?

Our work began on the Camp of Diocletian, which was founded by the Roman Emperor in around AD300. We were there for many years and discovered, among other things, the sanctuary of the goddess Athena-Allat. This is also where the great lion statue was found and the marble statue of Athena. In the late 1980s we moved to the centre of the city, where we excavated the residential quarters—as these had been rather neglected—and then moved on to a number of Christian churches. These churches in late Palmyra turned out to be a revelation. Every handbook tells you that Palmyra was abandoned, destroyed or became unimportant by the end of the third century. This is only partly true. The churches show that the city remained inhabited until the late ninth century.

Can you tell us more about the lion statue?

We found it in pieces; its stones had been reused in the temple’s foundation. So in 1977 the Polish sculptor Jozef Gazy restored the statue and it was placed at the entrance of the Palmyra Museum. We then restored it again in 2005 and it survived for another ten years, becoming a logo for Palmyra, appearing on postcards and in tourist photos. In May 2015, it became the first victim of Daesh [Isil], when the group took Palmyra. Incidentally, one of the many words for lion in Arabic is “assad”, which is also the name of Syria’s president [Bashar al-Assad]. So there might be a connection there. And of course it is a representation of a living being, of which they don’t approve. 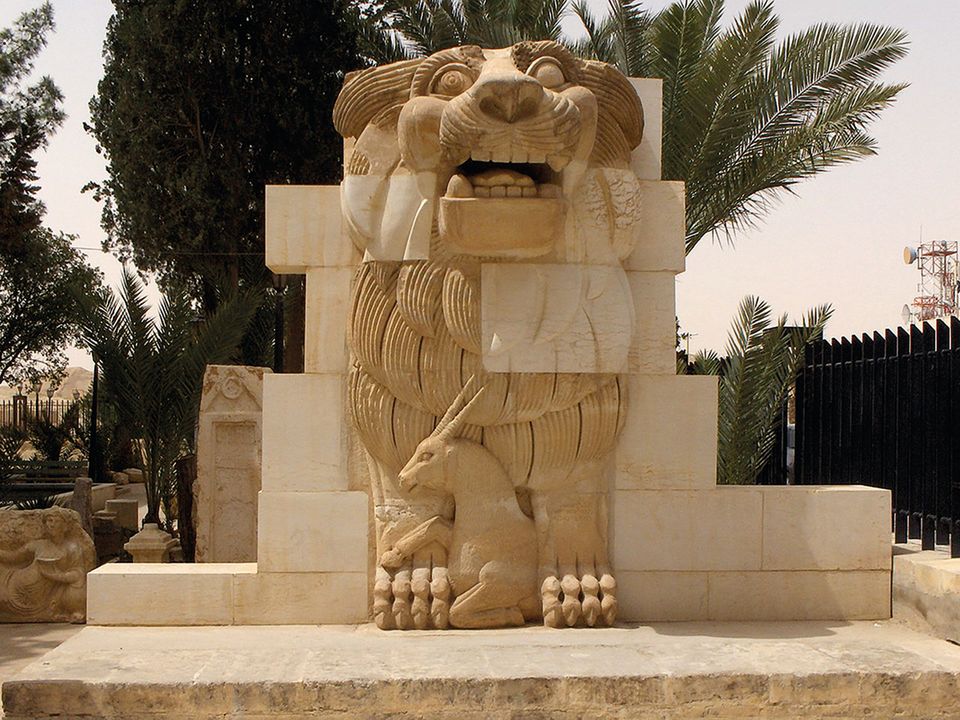 The lion statue, which was restored by the Polish sculptor Jozef Gazy in 1977 and stood at the entrance to the Palmyra Museum, was Isil's first archaeological victim in the city

When Russian and Syrian troops reclaimed the site, it became clear that practically everything in the museum had been broken. They destroyed everything systematically, room by room, sculpture by sculpture, using hammers and other heavy tools.

At the request of Maamoun Abdulkarim, the head of Syria’s department of antiquities, two of our restorers, Bartosz Markowski and Robert Zukowski, went to Palmyra to save what they could. They found the fragments of hundreds of sculptures scattered on the floor. They recovered 200 sculptures, of which only four were intact. The pieces were collected, packed and sent to Damascus where they will be put together. Their mission was vital because they came before the floors had been swept. Had they come any later, restoration may have been impossible.

What is the current state of Palmyra’s ancient buildings?

These monuments are lost. The two big temples, the arch and the tower tombs are heaps of stone. Nobody can accurately say what can be saved because you can’t go there. The site is off limits because of land mines and because Russian soldiers [are in control of it]. But I believe some elements could be rebuilt using the same stones. Most temples are well documented—nothing modern or 3D, but very good stone-by-stone drawings. This will make reconstruction easier but it will never be the same. Some people want to restore Palmyra virtually. This can probably be done and be shown in museums around the world. But not on the ground; that would be an abomination. 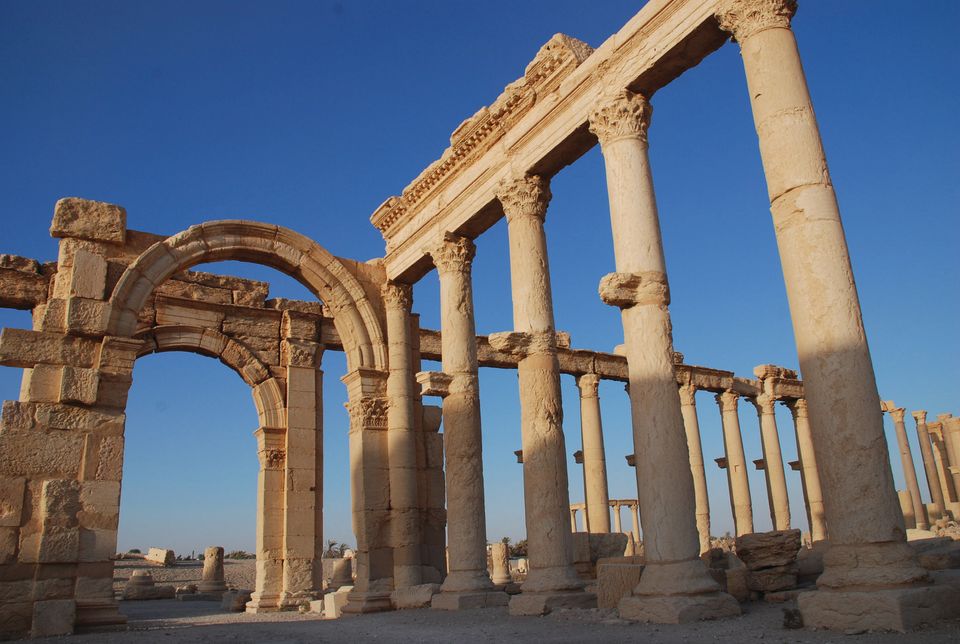 The ruins of Palmyra before Isil's occupation of the ancient city (Image: Georg Ismar/dpa)

To what extent do you think Palmyra’s monuments should be restored?

The restoration of ancient buildings must come later, when the war is over. Even then, the [priority] will be to save the people, not the monuments. That’s why the discussion around restoring Palmyra is futile; nothing should be done before the city’s inhabitants are able to return. The architecture and the monuments can wait; they’re already broken, nothing will happen to them. But Palmyra itself needs a complete rebuild. There was one occasion when a busload of inhabitants came from Homs, the closest city. But they were only there for a few hours to collect their belongings; they didn’t even stay the night. Undoubtedly, the conditions need to improve and Daesh are still only 20km away. It’s clearly unsafe.

Modern restoration practice follows the idea that nothing should be added. If something is missing, let it be missing, leave a hole in it, don’t complete it. In the past this was not the case. Many of the ancient objects in the British Museum, for example, were completed in later centuries; they look whole but they weren’t found that way. Nowadays, we try to only use original material. Some modern elements are used to hold an object together—maybe 10%, but no more. And these are easily recognised as new and can be removed.

I think that a lot can be done in Palmyra; many of the objects can be saved. Many were already broken when they were excavated. Now they will just be broken a little more; that’s history. Very rarely do you find a piece that is whole. I’m sure that in the future many more chapters shall be added to the history of this site and of Syria.

What was your relationship to the Syrian archaeologist Khaled al-Asaad, who was murdered by Isil? What was he like?

I had known Khaled since 1965 and he was a very good friend. He was completely dedicated to this city where he spent all his life, except for his college and university years in Damascus. He was always eager to help foreign visiting scholars—more than was his duty, really. He helped all the missions digging in Palmyra, solving practical problems and guiding them tactfully in their dealings with the locals. Needless to say, he knew every stone in the ancient city. 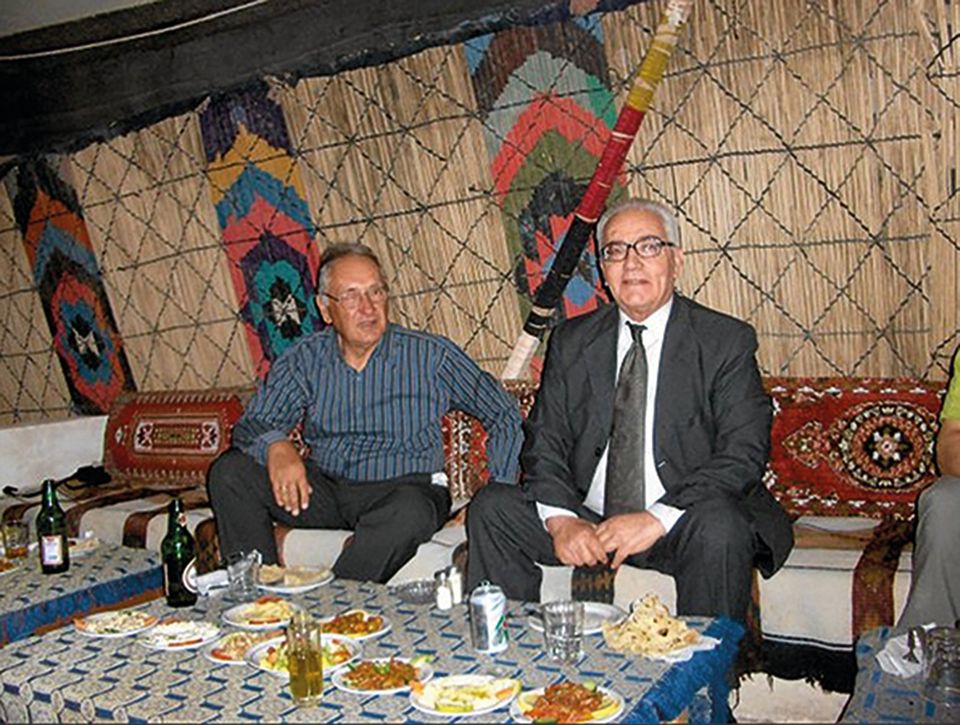 He was reportedly murdered because he refused to reveal the whereabouts of hidden artefacts. Is there any truth to this?

I have read the reports about him being tortured during his imprisonment in the caves of his museum. The stubborn and stupid idea that excavations are about finding gold was apparently shared by those brutes. He could reveal nothing because there was nothing to reveal. All the treasures were out in the open in the museum and they have destroyed them.

Do you have plans to return to Palmyra?

I don’t think I shall see Palmyra again. I’m 76 years old and a return may not be possible for years. Perhaps it’s better to remember it the way I last saw it. Besides, I am busy publishing our findings, which is a big job.