The statue of slave trader Edward Colston in Bristol might be the most notable to have toppled in recent UK history, but it is certainly not the first. In fact, almost 40 years ago, another monument dedicated to a controversial historical figure with links to slavery was pulled down by protestors in Liverpool.

Addressing this is a new sound piece by the artist Harold Offeh that has been unveiled at an empty plinth at Princes Avenue in Toxteth where a statue of the 18th-century financier William Huskisson once stood until it was pulled down in a 1982 riot. It is part of the Statues Redressed project that sees artists and community members dress statues around the city this summer to debate the role of monuments.

In the audio installation youth worker Stephen Nze, who witnessed the toppling, describes how a rope was tied to the neck of the statue and attached to the back of a Cortina car which accelerated, bringing the monument crashing down. Nze says that Huskisson was seen as a symbol of the state, slavery and oppression. 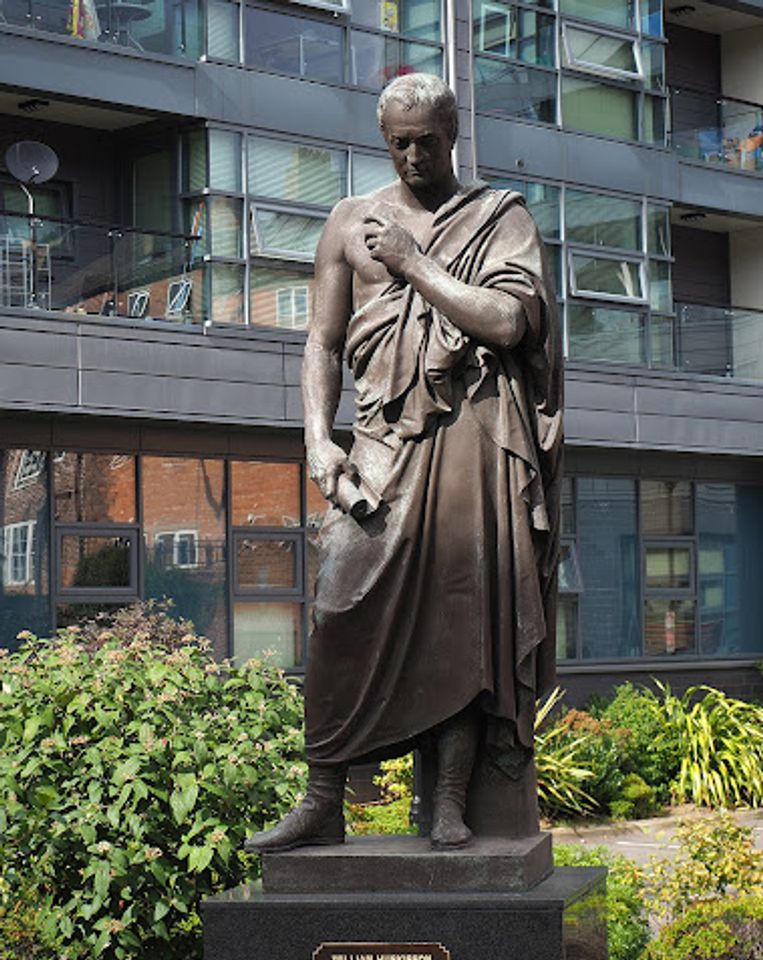 The statue of William Huskisson now resides at Duke's Terrace

Huskisson was also the member of parliament for Liverpool from 1823 until his death in 1830. A plaque at the empty plinth explains that “during his time representing Liverpool many of his supporters in the town were plantation owners and were not in favour of an end to slavery in Britain’s colonies”.

These pro-planter sentiments led Huskisson to oppose the abolition of slavery; in 1826, rather than support calls for immediate abolition, Huskisson championed the passing of the Consolidated Slave Law, reads the text. The contentious statue, made by the Victorian sculptor John Gibson, was later moved to two historic sites in Liverpool: first at the Oratory, St. James's Mount Gardens until 2005, and thereafter Duke’s Terrace.

The Huskisson piece is among the last three “reveals” in the Statues Redressed project. The other two works recently unveiled include Peter Carney’s transformation of the Queen Victoria statue (1866) at St George’s Hall. The Liverpool Football Club banner-maker has dressed the late monarch in colours worn by Rachael Blackmore, the first woman jockey to win the Grand National. Meanwhile, the designer Nadia Atique has draped the effigy of Bill Shankly, the former Liverpool FC manager sited at Anfield Stadium, in a superhero-like cape.

Statues Redressed is an initiative launched by the UK channel Sky Arts and Culture Liverpool, the city’s culture service. All of the redressed statues, almost 50 in total, will be presented in a special broadcast on Sky Arts, Freeview Channel 11, and the streaming service NOW in October.

Robin Kemp, head of creative development at Culture Liverpool, says “We don’t think we have the answers but we knew the conversation around statues, which was so polarised, needed broadening out… we have started a conversation that probably would not have happened without the project. There are very public Twitter conversations but also importantly, conversations with political leaders and civic leaders about what the statues mean in our city and how we preserve and respect them.”

The council always wanted the debate to be artist-led, he says, highlighting the artists who produced the pieces who are “often forgotten in these conversations”. Handing the historic works over to contemporary artists, such as Bob & Roberta Smith, has meanwhile been interesting and transformative, Kemp says, adding: “The statues had become part of the civic environment, almost turning into wallpaper. This project has prompted people to consider them in a different way, which is critically important.”

So how have people reacted? “Even if people don’t necessarily like some of the responses, they like the fact we’re doing this project in this way. The majority of works have been welcomed by the public at large while many academics have also been in touch. How do we extend that conversation now about the future of statues?” asks Kemp.

Some interventions are for a day only; the longest lasted around four weeks. No statue will be permanently changed. Earlier this month, another statue of Queen Victoria included in Statues Redressed was defrocked.