The talk of the piers: what VIPs are buzzing about at the Armory Show 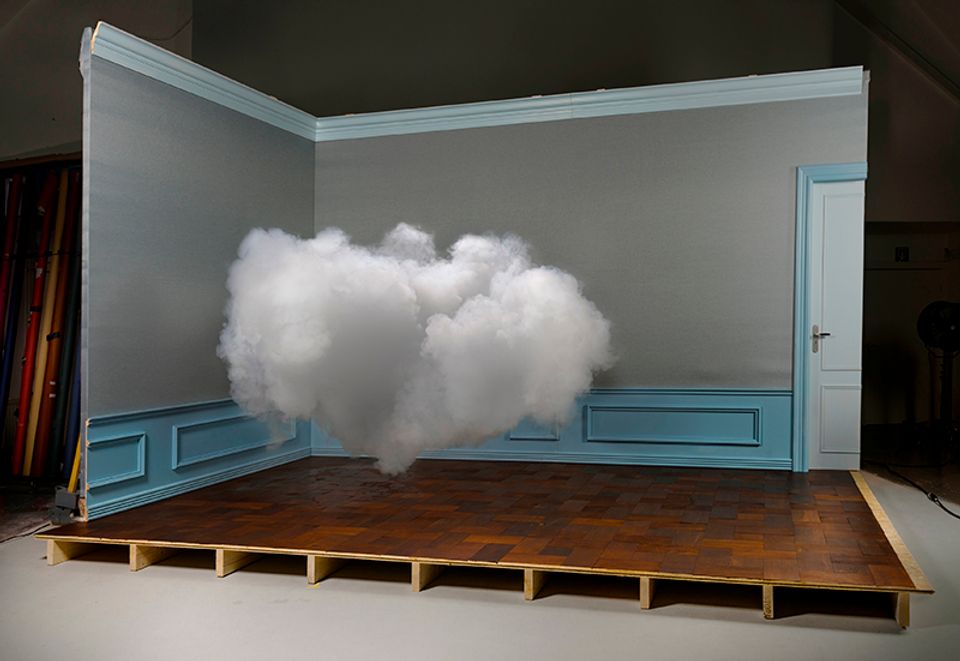 There is no shortage of art prompting visitors to whip out their phones for a quick photo or pause and stare at the Armory Show (8-11 March). Aside from the weather—a perennial talking point but especially so on Wednesday, as a nor’easter settled over the Atlantic coast, snarling traffic and dousing VIPs on their way to Piers 92 and 94—here’s what people were buzzing about on the fair’s opening day.

Where there is smoke...Berndnaut Smilde's cloud machine brings the weather inside the piers at #thearmoryshow

“You have to be in the right place at the right time”, says the artist Berdnaut Smilde of his commission for the Platform sector, Breaking the Fourth Wall (2018), the centrepiece of the London-based Ronchini Gallery’s stand at the end of Pier 94. Approximately every 40 minutes, a concealed fog machine controlled by computer emits one perfectly puffy white cloud into the booth, which has been kitted out with wood floors and crown mouldings to resemble a classical European house museum or one of René Magritte’s interiors. Blink and you’ll miss it: the cloud floats upward and disperses into mist within a minute or two. “In-between moments really trigger me”, says the artist. Smilde has mounted such cloud machines all over the world, but only once in New York, at Neuehaus last year; evidence of past presentations—in such spaces as a decommissioned electrical plant in Perth or a private museum in Shanghai–are documented in large C-prints on aluminium for sale on the stand. Furthering the theme of evanescence, Nimbus Powerstation (2017) is on offer for the price of one Bitcoin, worth between $10,888.42 at the high and $9,469.45 at the low on opening day. “I like the idea that it’s fluctuating, like the cloud”, Smilde says, “and also that it’s one to one”—one work of art for one virtual currency unit. 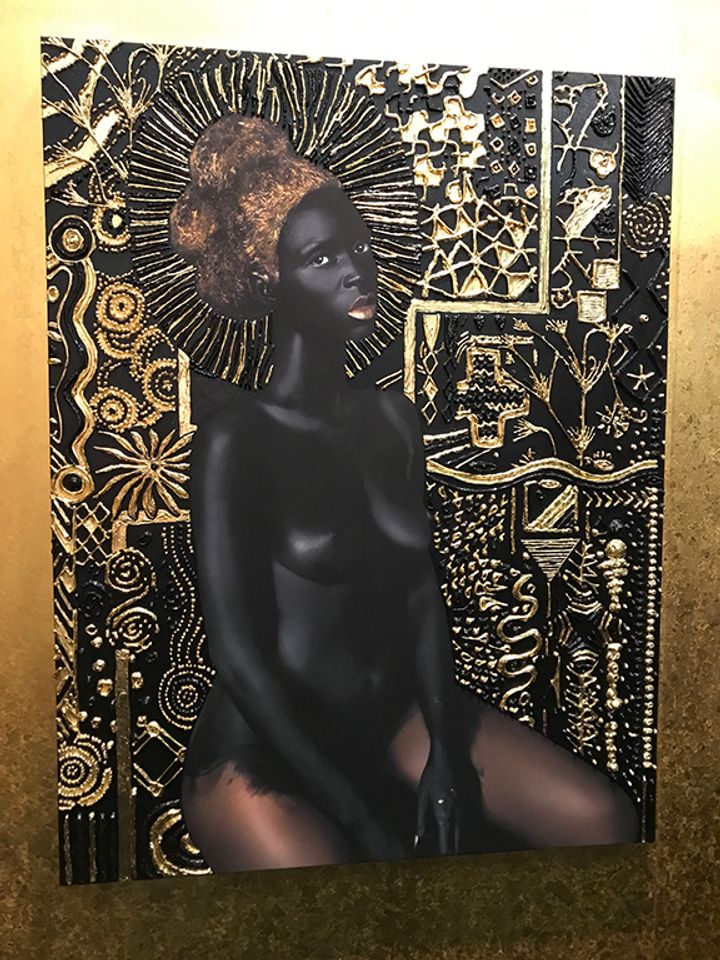 Crowds milled around the stand of Mariane Ibrahim Gallery—who had a breakout moment at last year’s Armory Show, when the Seattle-based dealer won the first $10,000 Presents prize for her booth featuring the German-Ghanian artist Zohra Opoku—during the VIP preview, eager for a glimpse of the tantalisingly gilded works within. This year, Ibrahim is presenting a solo booth of works by the British-Liberian painter and performer Lina Iris Viktor, who has unveiled new works in her striking black-and-gold Constellations series 5/6 (2018), partly shielded by a mashrabiya-style sculpture. The works are, however, at the centre of a legal battle, and are cited as one of the reasons Viktor recently sued the hip-hop performers Kendrick Lamar and SZA for copyright infringement, claiming their music video All The Stars—a song from the soundtrack of the hit film Black Panther—is more than a mere riff on her Constellations cycle. The gallery declined to comment on the legal proceedings, but it was clear that many of the works' admirers were following the case. 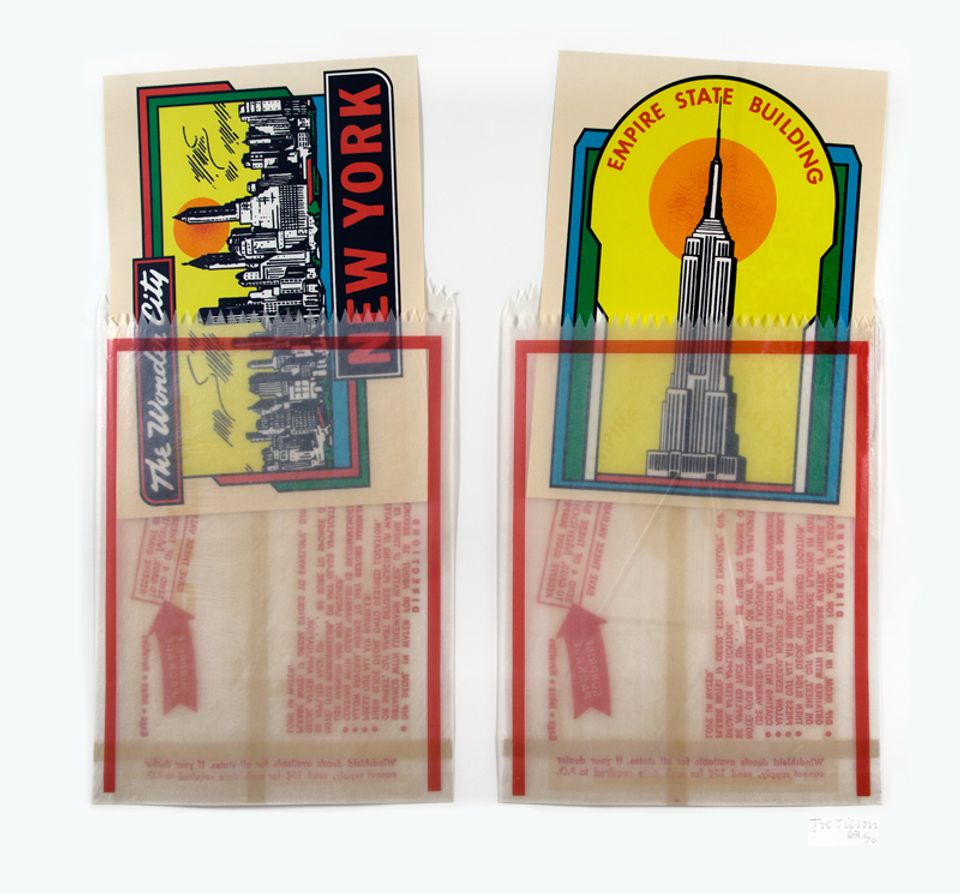 On Pier 92, London-based Lyndsey Ingram Gallery is presenting a love letter to Manhattan via the 1960s screenprints of UK pop artist Joe Tilson, which depict New York landmarks such as the Empire State Building in lurid technicolour. Super-sizing paper ephemera such as postcards extolling the city's tourist landmarks, the artist placed the prints in transparent envelopes. But the key to his New York homage can be found on the reverse, where Tilson has outlined very specific instructions for how the works should be assembled and displayed, saying: “Mount envelopes and decals on a sheet of white paper… with the decals half out of the envelope. Do not follow the instructions on the backs of the envelopes.” 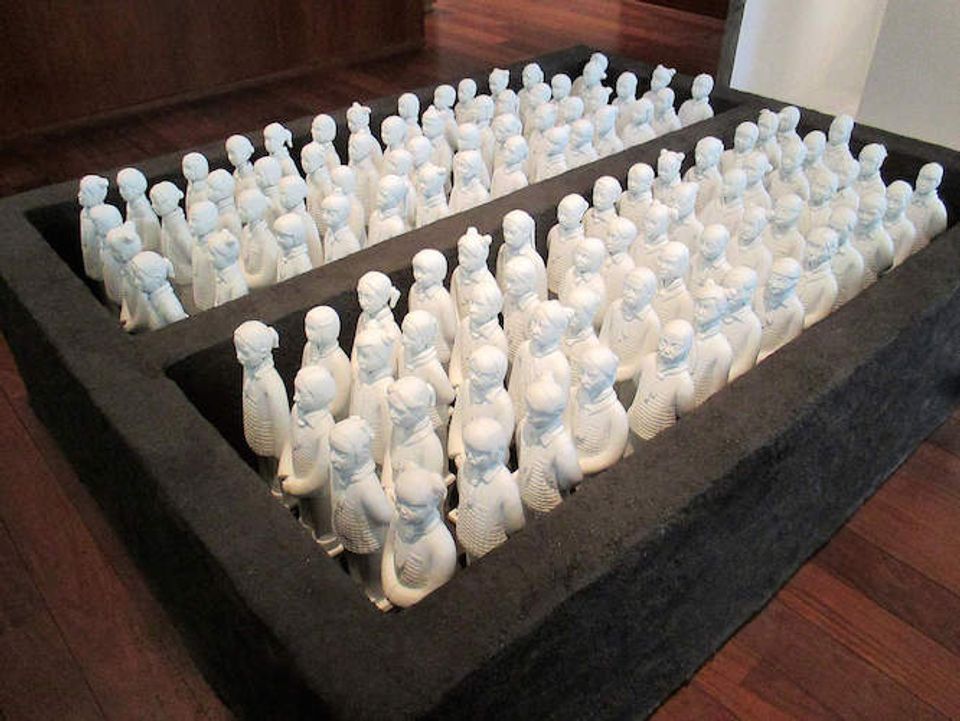 China’s Terracotta Army, an ancient platoon of life-sized warriors, has been on a blockbuster world tour, most recently on show at Philadelphia's Franklin Institute. A miniature version—this one made up solely of female figures—is attracting curious glances at Galerie Daniel Templon on Pier 94. The Paris-born artist Prune Nourry's work explores China’s former one-child policy, abolished in 2015. To create her present-day redux, Nourry photographed eight young girls in rural China, where the policy had the most impact, as infant girls were often rejected and placed in orphanages. According to the gallery, “By combing the eight original moulds with the help of artistan-copyists, Nourry created 108 unique and hybrid terracotta sculptures… reminiscing of all the Chinese girls missing because of gender selection”. 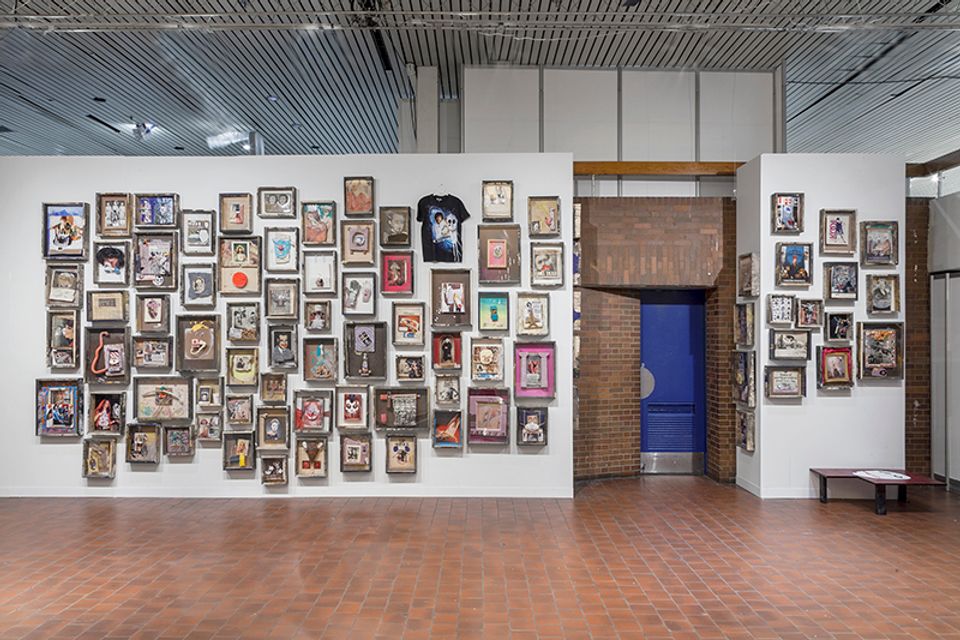 The Bruce High Quality Foundation naturally brings a touch of anarchy to the Armory Show with a special Platform presentation at the entrance of Pier 92 that ponders the theme of death. Last year, the anonymous Brooklyn-based collective closed its non-profit free art school, which had been running for eight years, and is pulling out all the stops to remind visitors of their own short life on this mortal coil. More than 250 mixed-media pieces are daubed with motifs such as skeletal heads and outlandish facial features, putting a new spin on the reverential tradition of the memento mori. The group says in a statement: “People die. Facts become stories. Reality becomes fiction. Nature becomes culture. Life becomes art. Something becomes nothing. To be or not to be isn’t really much of a question; we are then we aren’t.” 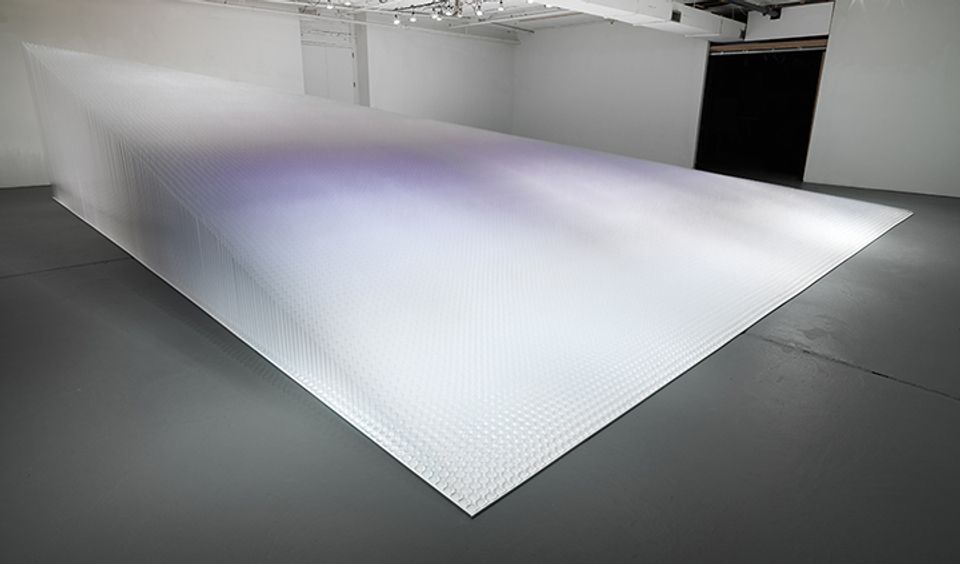 “Lately I’ve been interested in accumulations of transparent materials that begin to convey the impression of grayscale”, says the artist Tara Donovan of her paradoxically massive yet visually buoyant pyramid that anchors the “town square” of Pier 94 as part of the Platform sector of large-scale installations organised by curator Jen Mergel. The optically baffling work, made of approximately 37,000 segments of clear tubing, almost appears to be in motion, with what Donovan describes as “fugitive colour” appearing trapped inside like a hologram. Given her history of turning humble materials like drinking straws or coffee filters into enveloping sculptures that call into question the relationship of the body to its surroundings, she adds, it was important to her that her pyramid reach higher than fairgoers’ heads, to skew their sense of scale. A related group of framed, wall-based works on the adjacent Pace Gallery booth produce a lenticular effect with hundreds of stacked, die-cut cards of UV-coated styrene. For this art-fair novice, bulk buying was on the brain: “It’s my first time at the Armory Show and only my second art fair”, says Donovan. “It’s good people watching”, she says, “but it’s a little like being at Costco.”