The disposal of Confederate monuments will not erase America’s history, but some say removing them from public view is crucial to moving forward 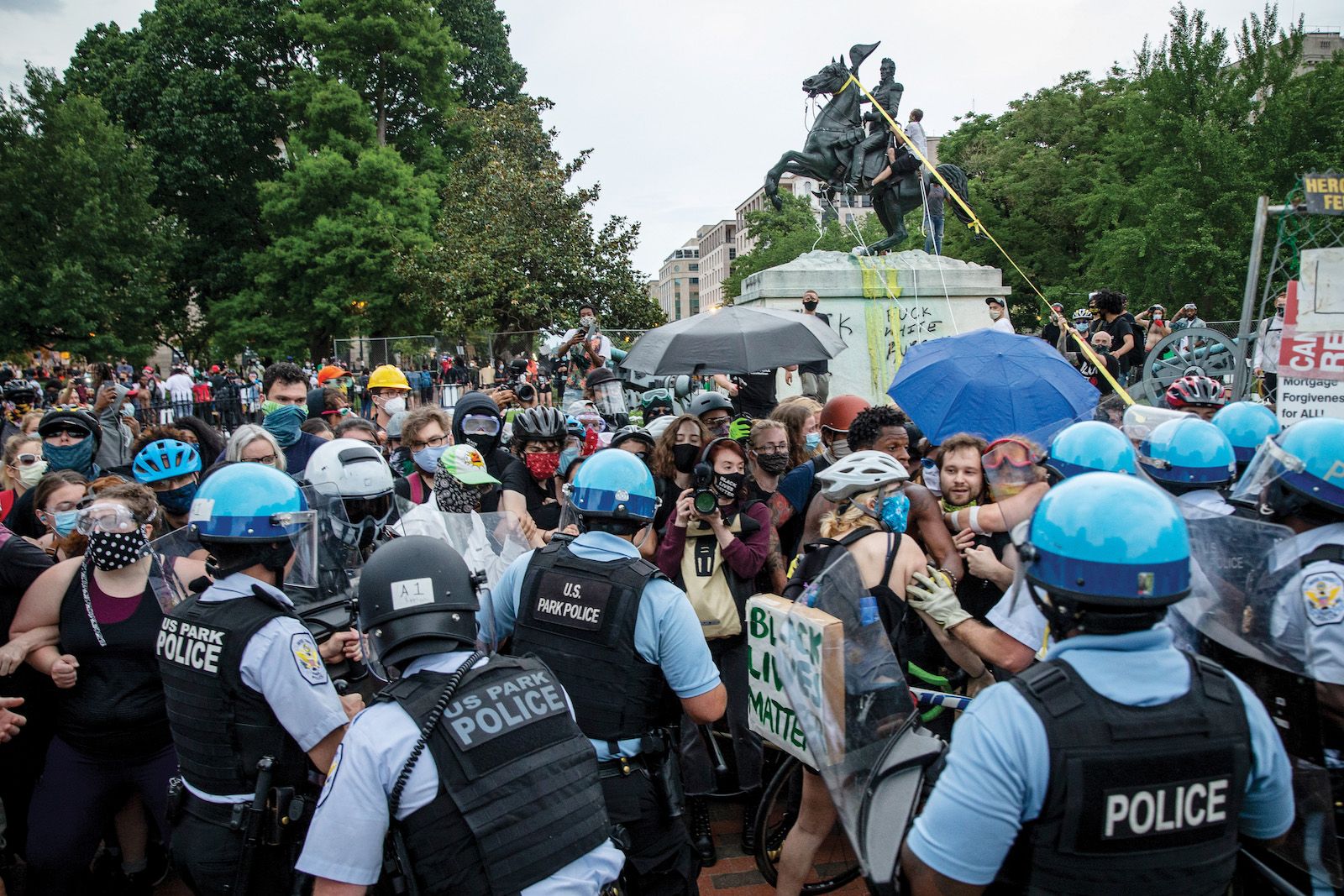 US Park Police clash with protesters attempting to pull down a statue of President Andrew Jackson in Lafayette Square near the White House in Washington, DC on 22 June Tasos Katopodis /Getty Images

The battle over contested monuments in the US escalated in June, as nearly 200 memorials and statues seen to enshrine white supremacy were vandalised and toppled by protesters or removed by city officials across the country. After demonstrators in Washington, DC, tried to pull down a statue of former president Andrew Jackson, who owned slaves and forced Native Americans to relocate from their ancestral lands, US President Donald Trump dispatched National Guard forces to provide security for the city’s monuments. He also issued an executive order on 26 June, promising to prosecute anyone who “destroys, damages, vandalises or desecrates a monument, memorial or statue” to the fullest extent of federal law, which could include ten years’ imprisonment or fines of $250,000. Criminal charges have so far been issued against four men.

Kevin Levin, a historian and expert on the Confederacy, tells The Art Newspaper that “while the basic outline against Confederate monuments hasn’t changed much in years, many people [have been] tuning into this subject in the past few months, and the intensity of the argument and the speed at which people are following up now is incredible”.

Most of the monuments targeted by protesters were erected in the first half of the 20th century, during periods of reactionary racism against desegregation and civil rights efforts, and have been subject to vandalism and calls for their removal for decades from activists. But the wider public opinion in recent weeks has quickly shifted and “communities are taking ownership at a powerful scale that’s never happened before”, Levin says. “The likelihood that these monuments won’t continue to be vandalised if they remain in place is next to zero.”

Despite Trump’s executive order, which also threatens to withhold federal grants from any states or cities that “permit the desecration” of memorials and statues, many local officials have taken action to remove controversial monuments from public spaces. These efforts can be complicated by state laws, however. For example, the mayor of Jacksonville, Florida, announced plans to remove all Confederate monuments from the city without receiving any pushback from the state. But the Alabama cities of Birmingham and Mobile were fined $25,000 for removing monuments without clearance from the state’s attorney general, due to the Alabama Memorial Preservation Act, a statute passed in 2017 that requires local governments to get permission before removing or renaming monuments or buildings that are more than 40 years old.

Birmingham’s mayor Randall Woodfin defended his decision to remove the city’s Confederate Soldiers and Sailors Monument, a 52ft-tall obelisk erected in 1894 to honour Confederate veterans. But Mobile’s mayor Sandy Stimpson ordered that a statue of the Confederate Admiral Raphael Semmes be moved to the History Museum of Mobile; it had earlier been moved to storage after it was vandalised during protests. Stimpson hopes the fine could be reversed and that the transfer will keep the city in compliance with the monuments law.

Nick Beeson, the collections curator at the History Museum of Mobile, says the placement of the statue in a museum will create “the opportunity to contextualise the history of both the subject and the monument itself”.

On 19 June, the holiday known as Juneteenth, which honours the day that news of the Emancipation Proclamation finally reached enslaved communities in Texas, the Houston Museum of African American Culture brought a long-contested Confederate statue from the street into its collection. The bronze angelic statue, Spirit of the Confederacy, was erected at Sam Houston Park in 1908, where it “picked at the scabs of our history and encouraged present-day racists”, says John Guess, the chief executive emeritus of the museum. Within the museum walls, however, he says the statue will serve as “empirical evidence” of America’s racist history. “Why an African American institution would accept a Confederate statue, especially when so many are being destroyed, is a controversial question that many people are asking,” Guess says. “But erasing the monuments will not erase racism, whereas using them in an educational context could, over time, spotlight the truth and help us heal.”

Similar efforts to provide context for an equestrian statue of Theodore Roosevelt, depicting the former president riding above an African and an Indigenous man, installed outside New York’s American Museum of Natural History in 1940, turned out not to be enough. Last year’s show Addressing the Statue attempted to explain the monument’s problematic composition; now, with the support of city officials, the museum announced it will remove the work. “The world does not need statues, relics of another age, that reflect neither the values of the person they intend to honour, nor the values of equality and justice,” says Theodore Roosevelt IV, a museum trustee and great-grandson of the former president, in a statement. “It is time to move the statue and move forward.”

Meanwhile, the Metropolitan Museum of Art came under fire for an Instagram post about monuments made by Keith Christiansen, the museum’s chairman of European paintings. Christiansen shared an engraving of the French archaeologist, Alexandre Lenoir, “battling the revolutionary zealots bent on destroying the royal tombs in Saint Denis”, as he described the scene, asking: “How many great works of art have been lost to the desire to rid ourselves of a past of which we don’t approve?”

Christiansen’s post met with widespread backlash for appearing to equate Black Lives Matter activists with revolutionary zealots, and the curator apologised in a staff memo. But his comments also raise the question of whether the monuments at the centre of today’s protests have any artistic merit. “From an aesthetic point of view, most people agree these statues are godawful,” says Matthew Sears, a professor of classics and ancient history at the University of New Brunswick in Canada. “Although there’s no accounting for taste, I doubt many people look at a statue of Christopher Columbus or an obscure Confederate general and are impacted as if they were standing in front of Michalengelo’s Pietà”.

Two artists in Richmond, Virginia— Dustin Klein and Alex Criqui—took it upon themselves to improve a statue of Confederate general Robert E. Lee, the largest along the city’s Monument Avenue. Since 2 June, they have been projecting images of African American heroes such as Martin Luther King Jr, Harriet Tubman and Frederick Douglass, as well as the faces of victims of police violence, including Tamir Rice, Breonna Taylor and George Floyd, on top of the sculpture. The governor of Richmond announced that the statue, which has been covered in graffiti, would be removed, but this has been delayed by a civil lawsuit filed by six anonymous residents who say that losing such monuments would decrease their property values and endanger the tax benefits they receive for living in historic districts.

Faced with such legal hurdles, it was perhaps inevitable that protesters would take more direct action, Sears says, adding that “slow and painful consultations and discussions” around the removal of racist monuments is not a feasible imposition to place on communities that have been “historically failed, mistreated or marginalised by the democratic process”. He notes a letter Martin Luther King Jr wrote while confined in the Birmingham city jail in 1963, where “his main frustrations were with so-called ‘white moderates’ who pleaded with him to stop marching and demonstrating and to be patient in order to convince people through democratic channels—because these people are a much more dangerous and difficult enemy than the outright white supremacist or Klansman”.

Appeared in The Art Newspaper, 325 July/August 2020
More NewsTopics US politicsPrintMonuments