There’s no place like home: Frieze New York gets domestic

“Furniture is the new ceramics” at the fair, where a number of stands offer some personal space

Comparisons between the art market and real estate are often overblown, but at this year’s Frieze New York fair, a decidedly homey atmosphere reigns.

Standing in the middle of Ibid Gallery’s booth is a mosaic-tiled wooden cabana with a working shower by James Herman, related to his ongoing project of recycling found materials for domestic structures. “Cleanliness and personal space are an interesting proposition for an art fair that can be crowded and messy”, gallery director Magnus Edensvard told The Art Newspaper.

At Frith Street Gallery, Cornelia Parker—who spooked visitors to the Metropolitan Museum of Art’s rooftop last summer with a replica façade of the Norman Bates house from Alfred Hitchcock’s Psycho—has created a wall piece, There must be some kind of way outta here (2016), using fragments of a stairway from Jimi Hendrix’s old London apartment. The Judd Foundation, exhibiting for the first time, is offering chairs in aluminium and pine by Donald Judd, curated by his son Flavin. 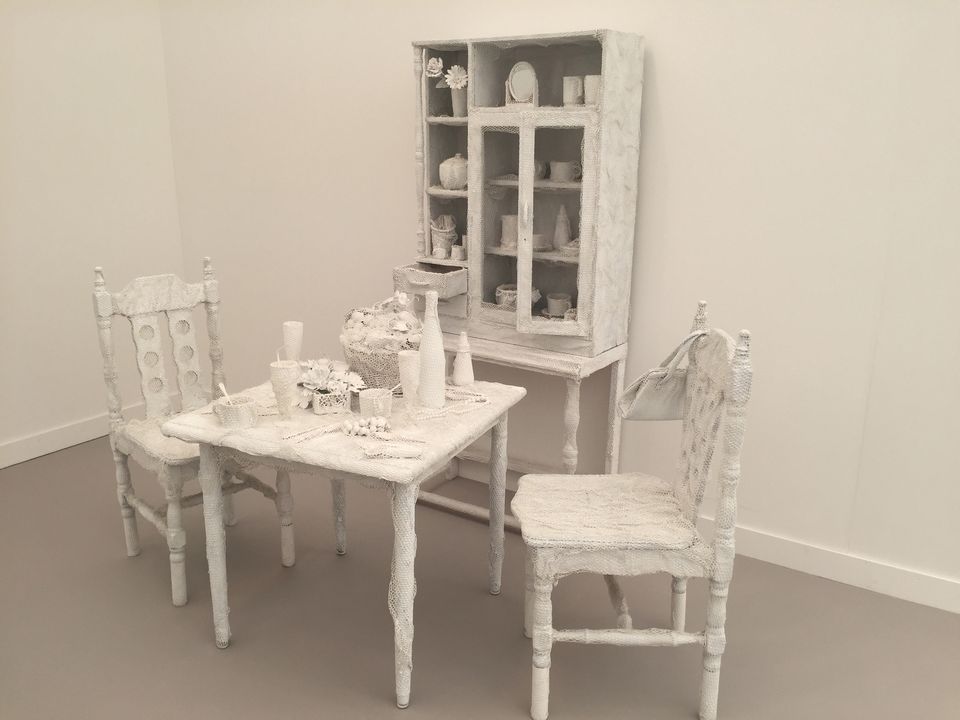 At Victoria Miro, Yayoi Kusama brings a spectral quality to Solitude of the Earth (1994), an all-white dining room setup enshrouded in wire mesh

Ready to eat? At Victoria Miro, Yayoi Kusama brings a spectral quality to Solitude of the Earth (1994), an all-white dining room setup enshrouded in wire mesh. A lived-in, miniaturised interior by Samara Golden—The Meat Grinder’s Iron Clothes are mine (2017), featuring lumpy cushions and a congealed cup of coffee—is affixed at a 90-degree angle to the wall at Night Gallery. According to gallery director Davida Nemeroff, the piece is, among other things, a “heartfelt portrait of domesticity and its realities”.

The takes-it-furthest ribbon goes to Marc Hundley’s faithful transplantation of his Williamsburg apartment to Canada gallery’s stand. Hundley has moved in his personal effects and fixtures with a few additions from friends and gallery artists, including a beat-up leather couch courtesy of Matt Connors and a 1960s Martha Rosler House Beautiful collage above his neatly made bed (a spare). The installation winks to the domestic trend—“I think furniture is the new ceramics”, Hundley says, semi-seriously—but expresses his yearning for comfort and community in the Trump era.