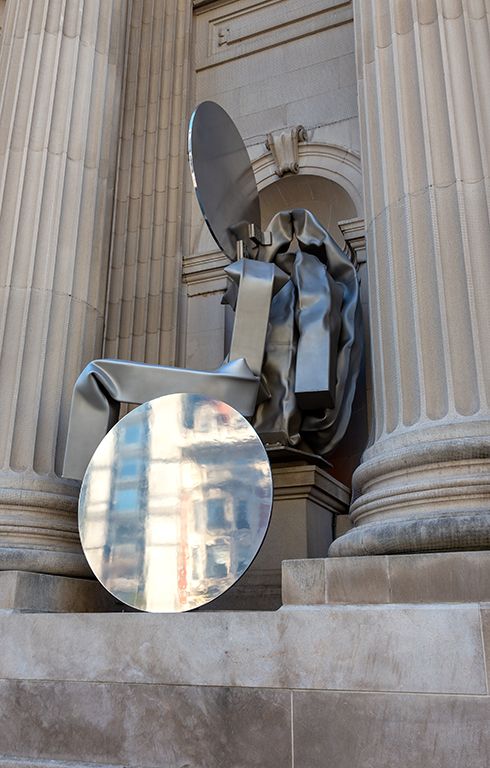 When Carol Bove was first asked by the Metropolitan Museum of Art to create sculptures for the niches along its Fifth Avenue façade, she faced a bit of a conundrum: she felt she had to consider “every inch” of the architecture, even as she realised that she would have to challenge its Beaux-Arts forms.

“In a way, I think they’re kind of impolite,” the Brooklyn-based artist says of the result, unveiled today: four colossal sculptures made of sandblasted, crumpled stainless steel tubes with 5-ft-wide reflective aluminium disks. “But I think they’re also very respectful.”

Evoking Modernist styles such as Art Deco and abstraction, the sculptures’ varying orientations within the four niches yield a rhythmic pattern that invites the viewer to reflect on the building’s design and how tradition can be rethought and subverted.

That is part of the point of the museum’s façade commission, the second one to be solicited by the Met with the goal of initiating fresh conversations with contemporary artists. The first, a series of bronze statues by the Kenyan-American artist Wangechi Mutu, was on view in the niches from September 2019 to November of last year. The niches had previously been empty, although the architect Richard Morris Hunt, who completed his Met building in 1902, originally envisioned that they would be filled with traditional figurative sculptures.

In an interview, Bove said that the title of her sculpture series, The seances aren’t helping, was spurred by the idea that “an architectural revival is like a séance because it’s a bringing back to life.” 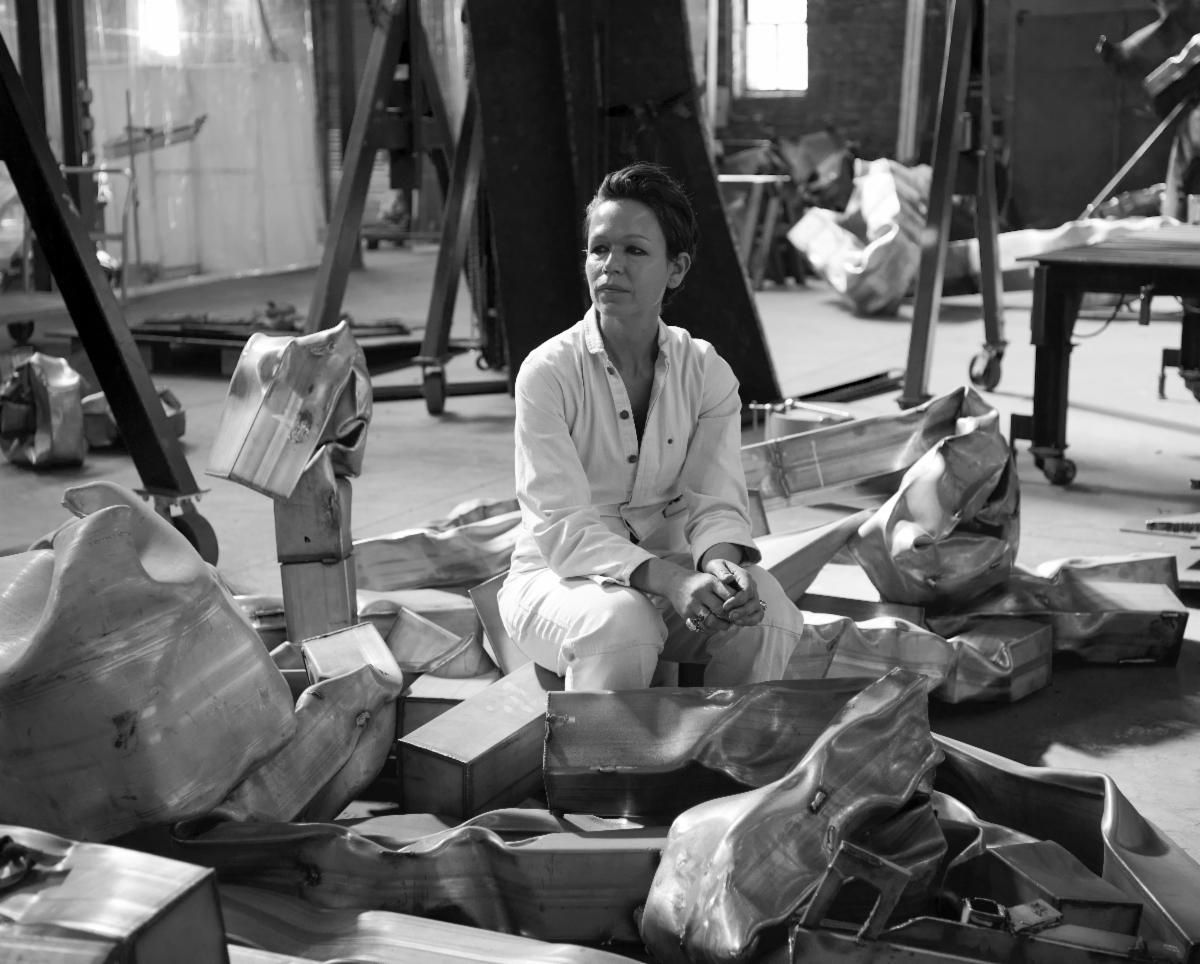 “It’s not meant to be literal,” the artist adds. “But it’s about engaging with the past, and it’s about a sort of frustration with it.”

Bove, 49, is mainly known for large-scale sculptures in public spaces that explore the possibilities of formal abstraction and are highly attuned to context. A 2013 outdoor commission for the High Line, Manhattan’s elevated park walkway, consisted of seven sculptures–noodles of powder-coated steel, arrangements of steel I-beams, a bronze platform–that called attention to surroundings that at the time consisted of the skeleton of a rusted iron railway. Her mostly vertical abstracted forms for the Swiss Pavilion at the 2017 Venice Biennale responded directly to the women sculpted by Alberto Giacometti. For a 2017 installation in a sculpture park at Laguna Gloria at The Contemporary Austin in Texas, she created a multitude of abstract forms in diverse shapes and colours that reinterpreted the forms in a classical sculpture garden.

“I often end up borrowing work or putting it in relation to a found object or even inverting the space and using the space as a pedestal–or using the work as a pedestal for the space,” Bove says. “At the Met, you could say the works are added to the façade, but the façade is also taken as a frame. They’re sort of mutually framing each other.”

Sheena Wagstaff, the museum's chairman of Modern and contemporary art, who oversaw the commission, says: “The Met's Beaux-Art architecture is 119 years old but—like the niches that were left empty—the museum itself is an ongoing, unfinished project, always changing. Old certainties wither in this new era: Bove's sculptures speak directly to this, upending tradition but upholding the power of culture to question. They are dynamic provocateurs.”

Bove has also been the focus of solo shows at institutions including the Museum of Modern Art in New York, the Palais de Tokyo in Paris, the Kunsthalle Zurich and the Institute of Contemporary Art, Boston.

The artist, who was born in Geneva and raised in California, has an intimate history with the Met. “When I first lived in New York, I didn’t have air-conditioning and I worked in a clothing store on the Upper East Side, and I would go there every day and pay a quarter and just sort of wander around to cool off,” she recalls. “And then I got to know it really well.” 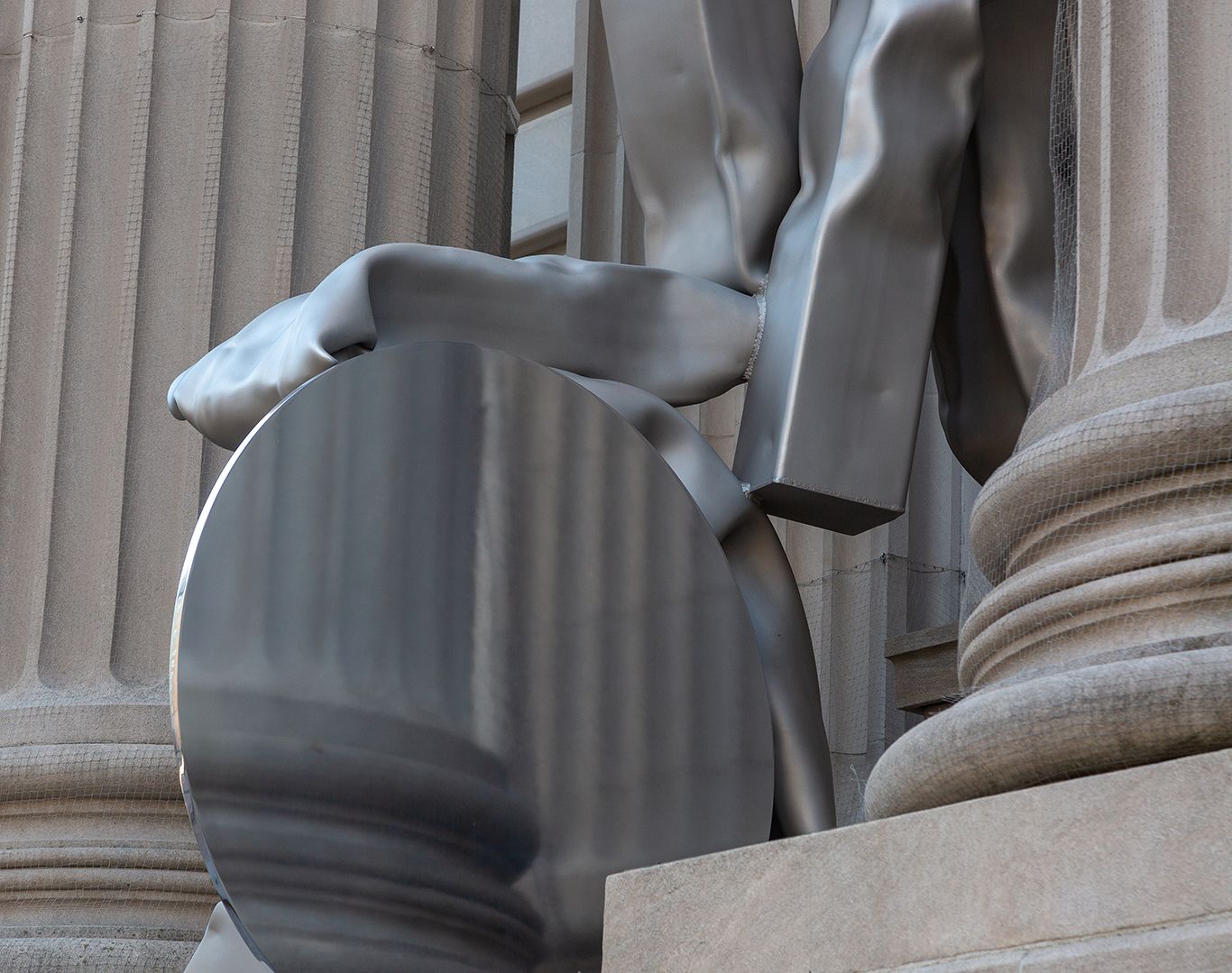 She says the museum approached her about taking on the façade commission in October 2019. Originally scheduled to go on view last September, the installation was delayed by the complications of the coronavirus pandemic. “We had to [temporarily] close the studio,” Bove says of her working space in Red Hook, Brooklyn, but she was glad to gain additional time in which to reflect on the designs for the sculptures. “It was great to just be able to slow down and really think through some of the ideas.”

The artist works without preparatory drawings, which can pose a challenge, and the Met commission was unusual because of the scale of the works, she says. Each of the sculptures is around 11ft tall. Adding to the complexity was the mix of different elements, the steel tubes and aluminium disks.

“I work improvisationally at real scale, so the first thing we did was to build a full-scale architectural facsimile of the niche in the studio,” Bove says, “and then use hoists and cranes to suspend the real folded steel in place and then make compositions.”

“My initial thought was just, O.K., it should be big,” she says of the sculptures. “It needs to actually read from far away,” as the visitor approaches from Fifth Avenue or a cross street, “and it should be kind of crude. My image of it was that it’s made by a giant who has a lot of dexterity.”

Eventually Bove decided to scale down the size of the aluminium disks and base them on the diameter of the columns that flank the façade’s niches and on the medallion portraits on the spandrels of its arches. “It’s like taking that language that is articulated by the architect and then making a different pattern of it,” she says. “It’s one that is both continuous with it and also a break with it.”

She had considered using a solid colour for the disks but later decided that they should not be painted, preferring a mirrored finish that contrasted with the sandblasted metal on the sculptures’ tubes. “They were very supportive of it,” Bove says of the Met curatorial team, Wagstaff and Shanay Jhaveri, assistant curator of international Modern and contemporary art.

Finally, the artist was gratified to see the sculptures hoisted into place by crane operators and art riggers last week. “They just respond a lot to the light, but they also have a lot of the colour of the niche reflected in them,” Bove says. “One in particular, the one on the far right, it just looks so flat across the street. And then as you walk up toward it, it really opens up and the composition changes and it's really satisfying.” 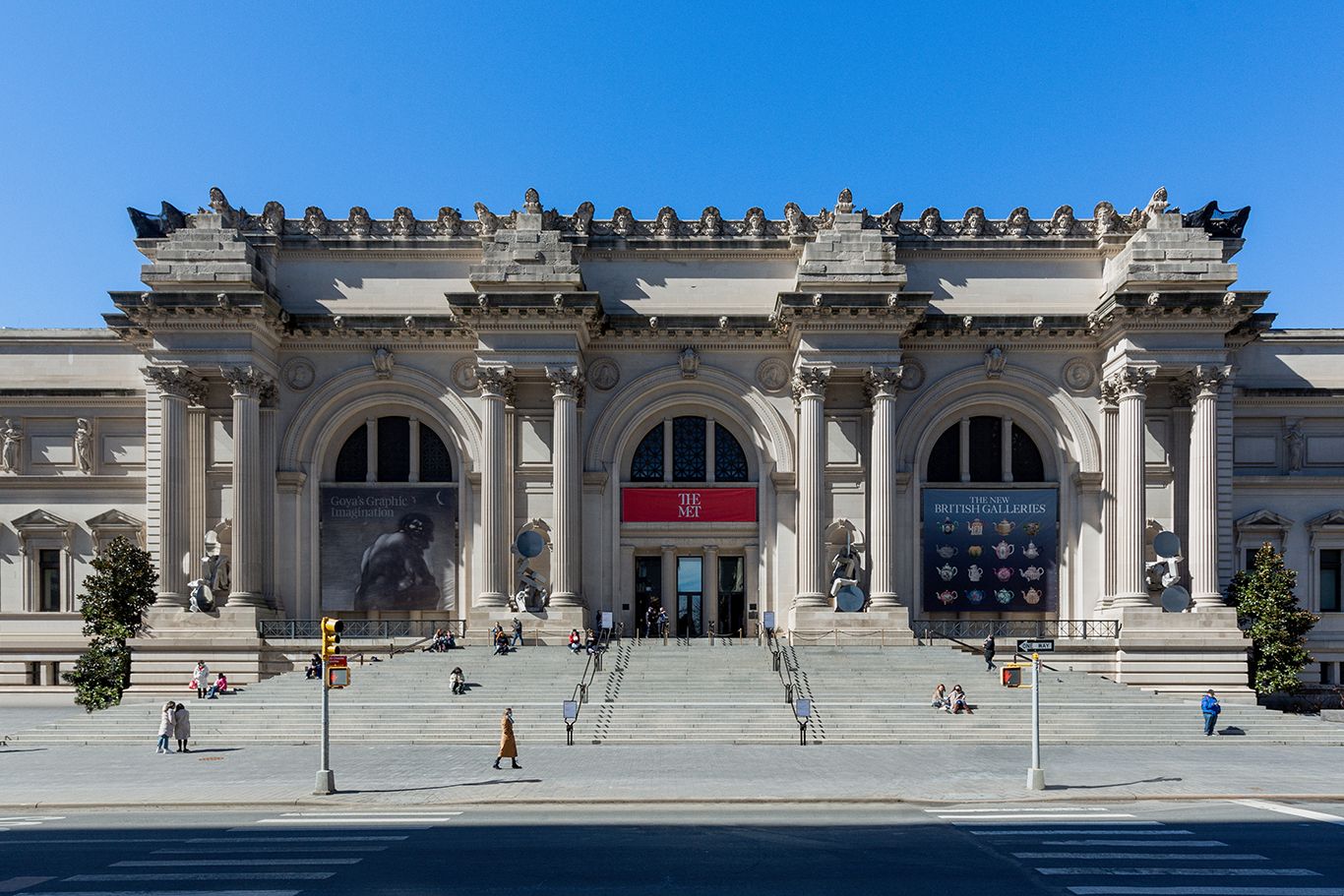