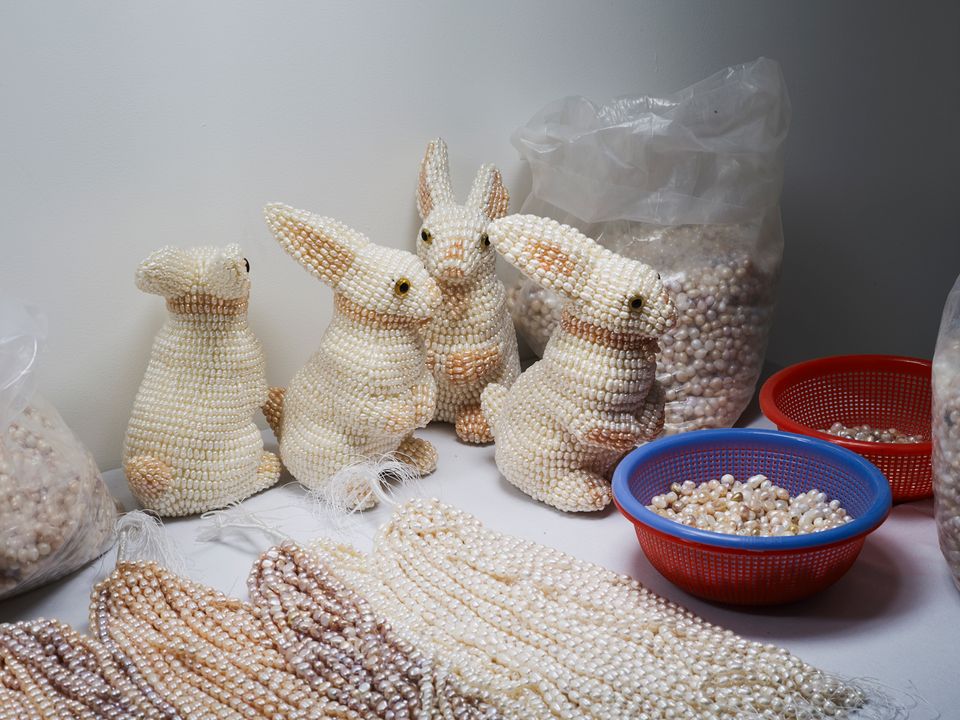 London’s newest public gallery, Goldsmiths Goldsmiths Centre for Contemporary Art (CCA), opened last weekend—to perhaps the wrong kind of fanfare—in a former plant-works building converted by the Turner Prize-winning collective Assemble. Its university campus location and labyrinthine space is the perfect ruse for Mika Rottenberg’s first major show in the capital (until 4 November). The show spans the Argentine artist’s career to date, from her degree show work Mary’s Cherries (2004), to recent pieces such as Cosmic Generator (2017-18). The exhibition gives us an insight into the development of the Rottenberg’s visceral video works and installations that often immerse us in a world bordering on the surreal but anchored enough in reality to offer real bite. In the video installation NonNoseKnows (Artist Variant) (2015), the hand operated fan inducing the protagonist’s noodle-making sneezes, is driven by a worker in a Chinese pearl cultivating factory. The surreal food production method juxtaposed with the dextrous but monotonous labour of the factory workers is mesmerising but also deeply disturbing.

Azzedine Alaïa’s contribution to a ravishing new survey of his work, The Couturier (until 7 October), was cut short by his untimely death last year but the Design Museum and guest curator Mark Wilson have done justice to the great couturier's designs. The “king of cling” redefined the silhouette in the 1990s with the bodycon look (one floor-length black dress features a top-to-toe spiral of zips that traces the contours of the female form), but his work ranges from outfits based on the supermodel Naomi Campbell’s proportions, elongated to resemble sculptures by Giacometti, to delicately dyed broderie anglaise and a dress rattling with tiny ivory-style teeth. The superb display features screens created by designers including Konstantin Grcic, while photographs by the artist Richard Wentworth, given rare access to Alaïa’s atelier, line the walls. Whether you prefer seashell-barnacled bikinis or Velázquez-inspired voluminous gowns, any self-respecting aesthete would sacrifice a grandparent to own clothes like these.

The art of Arab cinema and literature are being brought together for this year’s edition of Safar (until 18 September), a bi-annual festival of films from the Middle East. Hosted by the Institute of Contemporary Arts and the Institut Français, and organised by the Arab British Centre, the line-up includes a selection of 1960s film noir and contemporary films inspired by Arab literature from tales by Naguib Mahfouz to the classic story of One Thousand and One Nights. Many of the films have never been shown outside of the Middle East. This weekend you can see a selection of contemporary short films; newly restored versions of the classic films Opium and the Baton (1977) and The Land (1969); and the UK premiere of the Tunisian film In the Land of Tararanni (1973), an adaptation of Ali Douagi’s book Sleepless Nights that captures the zeitgeist of the pre-independence period in the country.