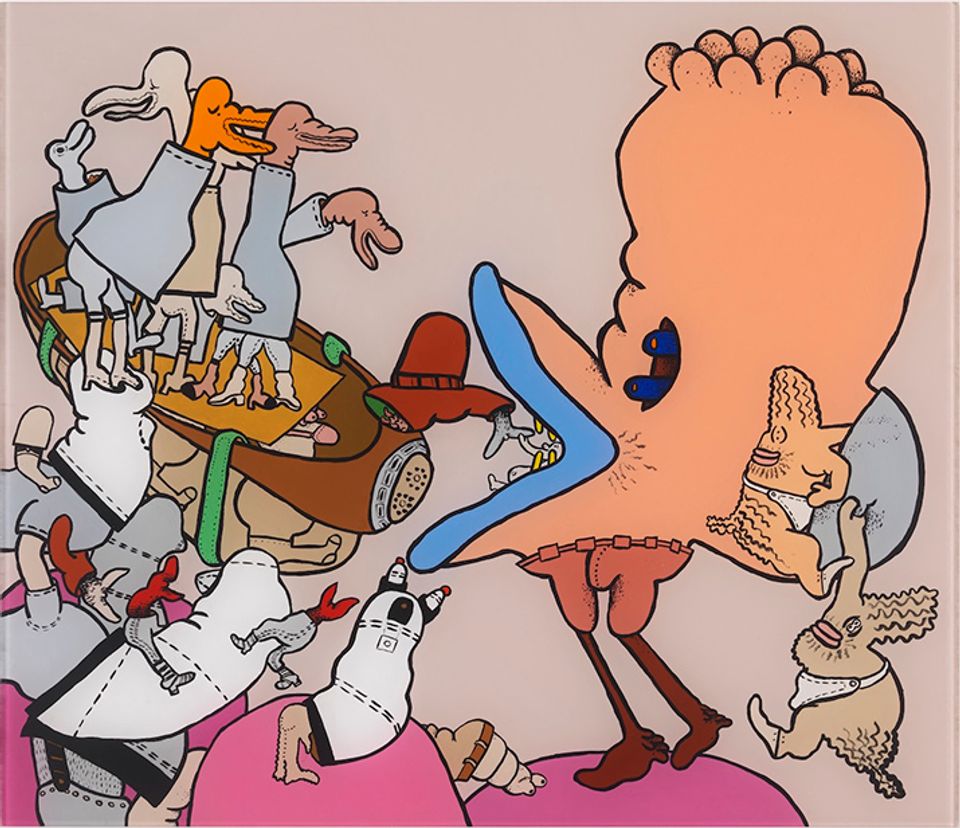 Gladys Nilsson's A Cold Mouth (1968) is on show at Goldsmiths CCA Courtesy of the artist and Garth Greenan Gallery, New York

The Chicago Imagists claimed many influences on their bold, playful style: the raw colours of Art Brut, the imaginative whimsy of Surrealism and the visual language of 1960s American advertising. Another big inspiration was their teacher at the School of the Art Institute of Chicago, Ray Yoshida, whose interest in non-Western art and vernacular culture reverberates in his pupil’s work. But above all, as How Chicago! Imagists 1960s & 70s (until 26 Mary; free) at Goldsmiths CCA is keen to show, the Imagists influenced one another. This is an ode to art school, the wonders of collaborative creation, the magic of a close-knit group who spent their formative years together. The fact that this is held at Goldsmiths college can be considered very apt, or a somewhat self-fulfilling prophecy. Particularly interesting is the collection of well-sourced ephemera on display: exhibition posters and merchandise often in the form of punchily-illustrated Hairy Who cartoons (the Imagists were masters at self-promotion). Downstairs, Roger Brown’s work Four Seasons (1974) shows domestic scenes in through apartment windows, each a separate world that together form a wide and rich tapestry. The 14 artists on show are presented much in the same way, individuals in their own right, but ones who struggled, and succeeded together.

Although there is a celebrity filled room in the Only Human: Martin Parr exhibition (until 27 May; tickets £18, concessions available) at the National Portrait Gallery, the bulk of the show is devoted to everyday life in the multifarious communities within Britain. Everyone—famous or unknown—is photographed with affectionate acuity and Martin Parr’s distinctive eye for the absurd. Parr has evidently had a great deal of fun putting the show together in collaboration with Phillip Prodger, the head of photography at the gallery, and forms an affectionately wry comment on the myriad communities that define us as a society—whether bowlers, bird watchers or bog snorklers. A glitter ball and swirly carpet animates the room devoted to dance, which Parr sees as “a great leveller”. Here photographs range from guests at a Sikh wedding to sweaty dancers in the mosh pit at the Whitney Goth weekend and mature female “silver swan” ballet dancers. For more on the opening night, see Martin Parr photographs patriots, partygoers and Perrys alike in new survey show at London's National Portrait Gallery.

Pitzhanger Manor, the former country home of the famed British architect Sir John Soane, reopens this weekend with a show by Anish Kapoor in its new exhibition spaces. The artist’s reflective sculptures play off Soane’s skilled use of mirrors to create space and bring light into his buildings. The £12m redevelopment of the house has restored the building to how Soane originally designed it, removing later Victorian additions and reinstating features that had been lost over the years. For the full story of the renovation, see Lost features of John Soane’s dream country home Pitzhanger Manor restored.