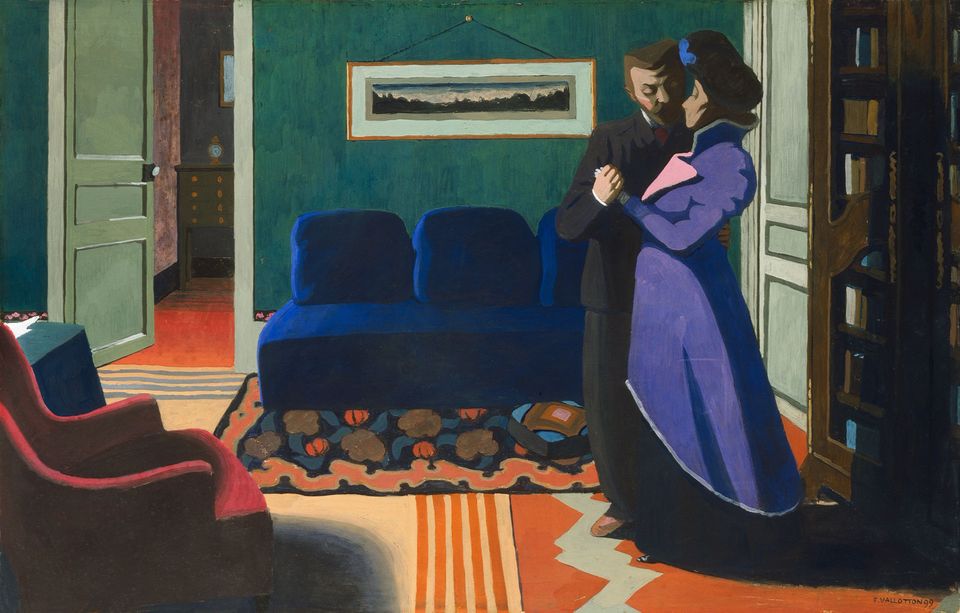 Félix Vallotton: Painter of Disquiet at the Royal Academy of Arts (until 29 September; tickets £14, concessions available) is the first UK exhibition of the Swiss artist in nearly half a century. Spanning some 40 years, the show takes us chronologically through his wide-ranging career. To be sure, Vallotton wore a lot of hats: printmaker, magazine illustrator, Nabi member, husband, war-wearied landscape painter. However, where he really hit his stride is in his psychologically charged interior scenes. Here, figures are distant and disengaged, foregrounded by flat planes inspired by Japanese woodcuts. Faces when shown are usually expressionless and obscured in shadowy palettes. Most often we see turned backs. In an 1897 series Intimités he masterfully exposes hypocrisies and betrayals in a troubled marriage, but he is perhaps no more acerbic than in Le Bon Marché (1893), pointedly depicting darkened masses of bourgeois Parisian shoppers in a triptych (typically reserved for religious scenes). Of course, like many men, his bite softened with love. The final rooms see a married Vallotton swap his trademark domestic disquiet for beautiful nudes, landscapes and still-lifes. However, as the Great War approached, anxiety spilled forth once again. A final series of woodcuts depicting the horrors on the battlefields leads onto a set of eerie landscapes. Conveying emotions, they are windows into the interior life of Vallotton’s later years, proof that his penchant for pervading unease never quite left him.

Cindy Sherman’s landmark series Untitled Film Stills (1977-80) is shown in full for the first time in the UK at the National Portrait Gallery’s retrospective of the US photographer, Cindy Sherman (until 15 September; tickets £20, concessions available). It is a great chance to see some of the lesser-known portraits from the Hollywood-inspired series, such one of Sherman dressed in leopard-print, cigarette in hand and mascara-tinged tears running down her face evoking a distressing event the details of which we will never know. The exhibition includes around 150 works, from Sherman’s early student explorations of self, where you can see the seeds of later works, to her most recent murals, pasted directly onto the walls. The exhibition also shows Sherman’s keen eye for humour, exemplified in the Cover Girls series where she sends-up the serious poses of magazine models; her penchant for the macabre, in the disturbing clown faces of the Masks series; and her interest in Surrealism, channelling Hans Bellmer in a room dedicated to the Sex Pictures and Surrealist Pictures series.

Gagosian’s landmark exhibition Francis Bacon: Couplings (until 3 August; free) includes 14 sexually-charged paintings that the British artist produced between 1950 and 1975 showing double-figure distortions of his lovers, fellow artists and motifs of the psyche. Most pieces in the exhibition have been borrowed from private collections or have not been shown in decades, allowing visitors a rare chance to experience them in the flesh. Among the highlights, the work Two Figures in the Grass (1954) was last shown in Bacon’s retrospective at the Grand Palais in 1971, and is the last painting he made depicting homosexuality before returning to the subject after decriminalisation in 1967. A full catalogue including a previously unpublished interview with Bacon will be released in October to coincide with London’s Frieze art fair.