From Jonas Mekas darkly humorous memories of escaping the Second World War, to concentration camp tourism, to a photographer facing the death of her favourite technology

The Toronto International Film Festival ended on Sunday, after screening hundreds of independent and mainstream films, shorts and documentaries. As always, art found a way into the programme. Here is our selection of three art-related films to look out for.

I Had Nowhere to Go, directed by Douglas Gordon In this piece by the Glaswegian multi-media artist Douglas Gordon, the film historian Jonas Mekas reads from his 1991 memoir detailing the anguished war years in Lithuania and a battered 1944-45 Germany of slave labour and Allied air raids. Most of the film is an anti-cinematic solid black screen, as Mekas recalls death and deprivation and the pure luck of being alive in gritty post-war New York. Gordon shows images sparingly, as if they were a few crumbs for a camp survivor. The long black gaps serve as a reminder that, for the war dead, for exterminated Jews, and for most refugees, there was no heroic archival footage, just loss. Yet Mekas’s wit behind the black screen makes you laugh out loud. His reflections on the multi-faceted use of the expression “fuck you” by his fellow Brooklyn factory workers are not to be missed.

The B-Side: Elsa Dorfman’s Portrait Photography, directed by Errol Morris Storytelling blends with tech-talk in this documentary by Errol Morris, the director of The Fog of War (2004). Based in Cambridge, Massachusetts, Dorfman took up photography at the age of 28 because, “as an unmarried Jewish girl”, she wanted to be able to tell people that she did something. In Harvard Square, she sold snapshots of Allen Ginsberg and Bob Dylan, whom she met through a job at Grove Press. In the early 1970s, she experimented with self-portraits and pictures of family and close friends like Ginsberg, a willing model.

Her life changed with the Polaroid 20/24, a camera that could make huge photographs. There were six of them in the world. “The camera was like a room with a hole for a lens,” she says in her studio. The B-Side refers to a second exposure in each Polaroid image, which tended to have fascinating imperfections, and which Dorfman kept.

“I’m really interested in the surfaces of people. I am totally not interested in capturing their souls. I’m only interested in how they seem,” Dorfman tells Morris as they view the camera’s precision in 30 years of colossal images.

Without a dealer or a gallery, Dorfman sold her own work—with success—until the Polaroid company failed and its new owners killed the 20/24 and stopped making film for it. “The now is racing beyond you,” she says, “All of a sudden you have the cameras, they’re artefacts like ashtrays.”

The future is uncertain for Dorfman’s vast archive, although a film by Morris can’t hurt. 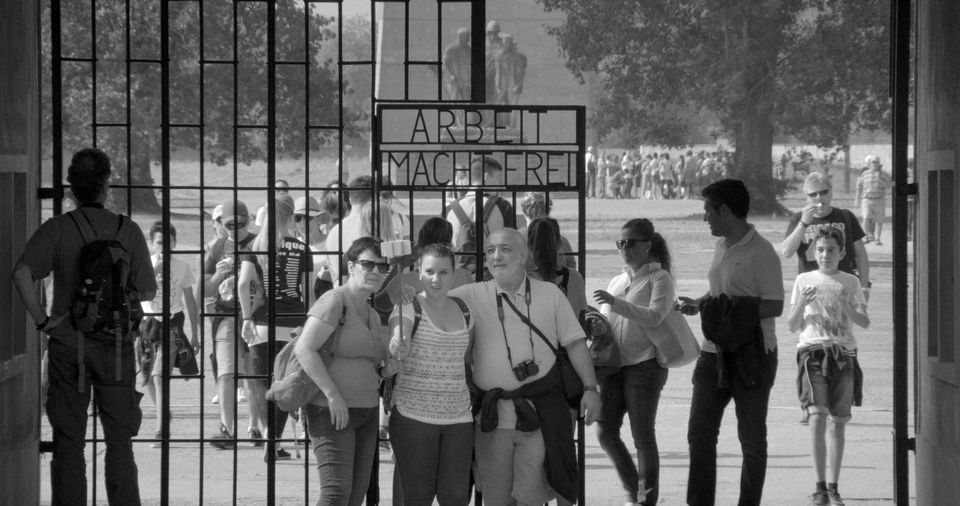 Austerlitz, directed by Sergei Loznitsa This documentary, which follows throngs of visitors touring the museums at Auschwitz and other Nazi camps, takes its name from the 2001 novel by W.G. Sebald in which a man travels to Europe to reassemble the strands of his parents’ fate during the Holocaust. A fitting subtitle for the film could be “freizeit macht frei” (leisure sets you free).

The Ukrainian director Sergei Loznitsa’s specialty is crowds, whether they are protesting in Kiev’s central square (Maidan, 2014) or in the streets of St Petersburg (Event, 2015). There is no such purposeful journey here. Loznitsa sets up his camera and tourists pass through the gates bearing the words Arbeit Macht Frei (work sets you free) in shorts, baseball hats and t-shirts, unaware they are being observed, unconcerned that dark ghosts might haunt the place. The effect, not sinister or ghoulish, is numbing.

The open-air museum experience doesn’t vary much from that of other tourist sites.  Visitors grip audio guides or just read cell phones. Occasionally, a guide provides details about what happened there. Where the industry of extermination once operated, an industry of tourism now reigns.