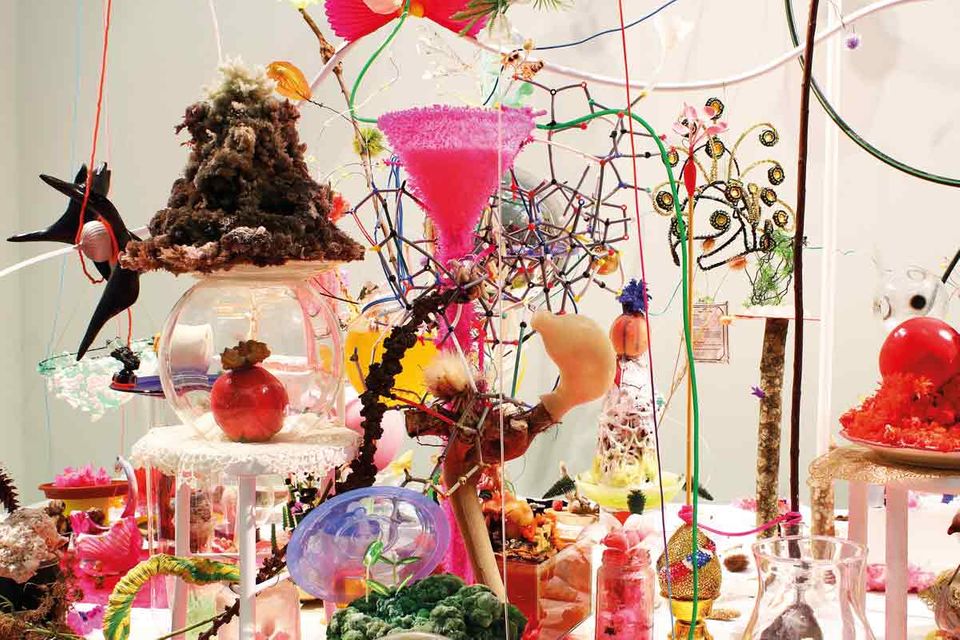 What do tears, fitness machines, labyrinths, fertiliser crystals, secretaries, tree branches and meteorites have in common? Nothing, normally, but in the surreal worlds that the Swiss artists Gerda Steiner and Jörg Lenzlinger concoct, using natural and mass-produced objects, each has a role to play. For the exhibition Too Early to Panic: Gerda Steiner and Jörg Lenzlinger (until 23 September), the Museum Tinguely is presenting labyrinthine installations that incorporate all of these elements and many more. Nature, biodiversity and transformation are key themes in the duo’s work, and the immersive presentation is designed to awaken the senses and allow for the contemplation of concepts such as growth, beauty, death and fertility—and the impact on society of the choices we make. “It’s a total work of art—a real gesamtkunstwerk,” says the exhibition’s curator, Séverine Fromaigeat, who worked closely with the artists on the show, which explores 25 years of Steiner and Lenzlinger’s working relationship, as well as what they did separately before they became a duo.

A solo show of works by Francis Bacon or Alberto Giacometti alone would be enough to draw big crowds, but the Fondation Beyeler has upped the ante by staging a double whammy of these two Modern masters (until 2 September). They first met in the early 1960s, and were probably introduced by the British painter Isabel Rawsthorne, who was Giacometti’s lover and a model for both artists during different periods. Each strived to capture Rawsthorne’s alluring character—Bacon in paint and Giacometti in sculpture. Arranged thematically, the exhibition highlights similarities between the artists, including being obsessed with depicting the human head, as well as differences such as Giacometti’s use of grey, which is in stark contrast to Bacon’s lavish use of colour. The final room of the exhibition contains two full-scale video projections of the artists’ studios. Covering the walls and floor, the studios are recreated using archival photographs overlaid with sound recordings of the artists.

When Bruce Nauman entered the graduate art programme at the University of California, Davis, in 1964, the university was still best known for its agriculture course. Artists who taught there, including Robert Arneson and Wayne Thiebaud, would lead the northern California art developments known as Bay Area Figuration and Funk. Many of the faculty saw in Nauman a rare intelligence and independence, but no one envisaged the stellar position he would attain in the turn-of-the-century art firmament. The Schaulager is hosting a five-decade survey, Bruce Nauman: Disappearing Acts (until 26 August), co-organised with New York’s Museum of Modern Art (it is due to travel to MoMA and MoMA PS1 in October), that ranges from drawings, sculpture and holograms to sound and video installations. The curator Kathy Halbreich says this is the first opportunity for younger generations to see the “full breadth of Nauman’s work, and for those who have followed his career from the start to see how the tone has changed in recent years, becoming melancholy, meditative and fretful, rather than angry”.