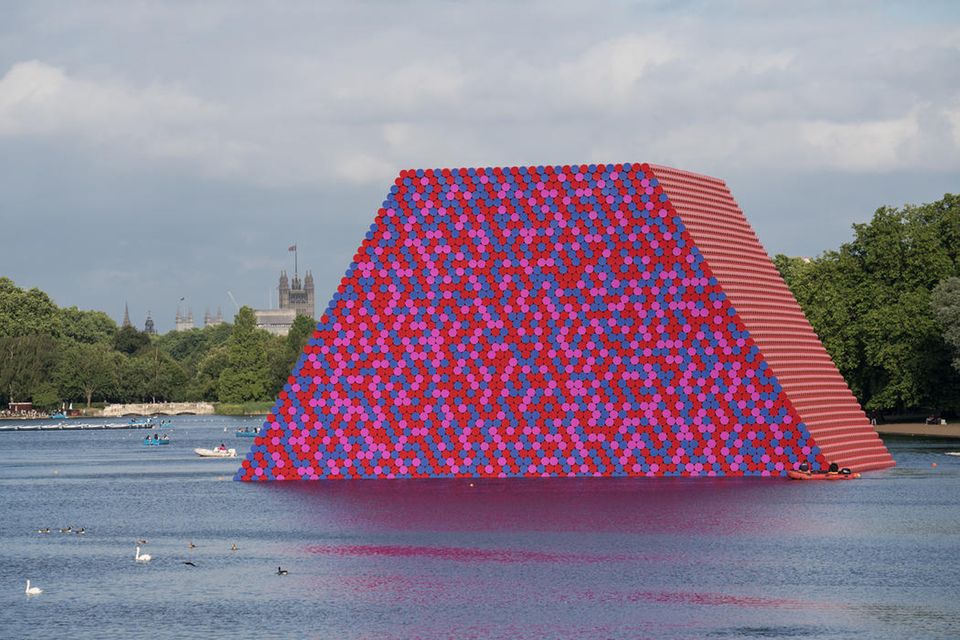 Christo’s The London Mastaba (2016-18) was officially opened this week on the Serpentine Lake in Hyde Park. But the gigantic floating sculpture would have been hard to miss before the official opening as it is measure 20m in height and is made from more than 7,500 horizontally stacked barrels. It is Christo’s first public outdoor work in the UK and will be on view until 23 September. The installation has been a collaboration with the Serpentine Gallery, where the exhibition Christo and Jeanne-Claude: Barrels and The Mastaba, 1958–2018 (until 9 September) looks at the development of the work as well as other similar sculptures also using oil barrels that Christo, and his late wife and collaborator Jeanne-Claude, worked on for half a century. There are plans for unrealised sculptures at locations such as the Suez Canal and New York’s Museum of Modern Art in the 1960s, as well as a proposals for an even bigger mastaba in the Middle East, which was first conceived back in 1977.

The obsessive observations of Frida Kahlo are revealed in the Victoria and Albert Museum’s display of the ever-popular artist’s “secret” wardrobe. Frida Kahlo: Making Her Self Up (until 4 November) marks the first time that Kahlo’s personal items have left the Blue House in Mexico City—the home in which she was born, lived and died, and that is now a museum dedicated to the Mexican artist. A cupboard of clothes and portraits was left sealed after Kahlo’s death—on the instruction of her husband Diego Rivera—and was only opened in 2004, half a century after she died. The exhibition displays more than 200 objects from this collection, including Kahlo’s clothing, jewellery and a number of self-portraits, as well as films and photos. “A counter-cultural and feminist symbol, this show will offer a powerful insight into how Frida Kahlo constructed her own identity,” says Claire Wilcox, the senior curator of fashion at the museum.

The Barbican continues its strong programme of photography exhibitions with Dorothea Lange: Politics of Seeing and Vanessa Winship: And Time Folds (both until 2 September). Politics of Seeing is the first survey in the UK of works by the US photographer Dorothea Lange, who famously encapsulated the Great Depression with her 1936 portrait, Migrant Mother, showing Florence Owen Thompson and her children in a camp. The exhibition also includes images of the internment of Japanese-Americans during the Second World War among the 300 artefacts on show. Meanwhile, the concurrent show, And Time Folds, by the British contemporary photographer Vanessa Winship transports visitors to the Balkans, Turkey and the Caucasus, where she worked for more than a decade. The exhibition also includes works from Winship’s 2011–12 series She Dances on Jackson, where she travelled across the US documenting the impact of the 2008 financial crisis.