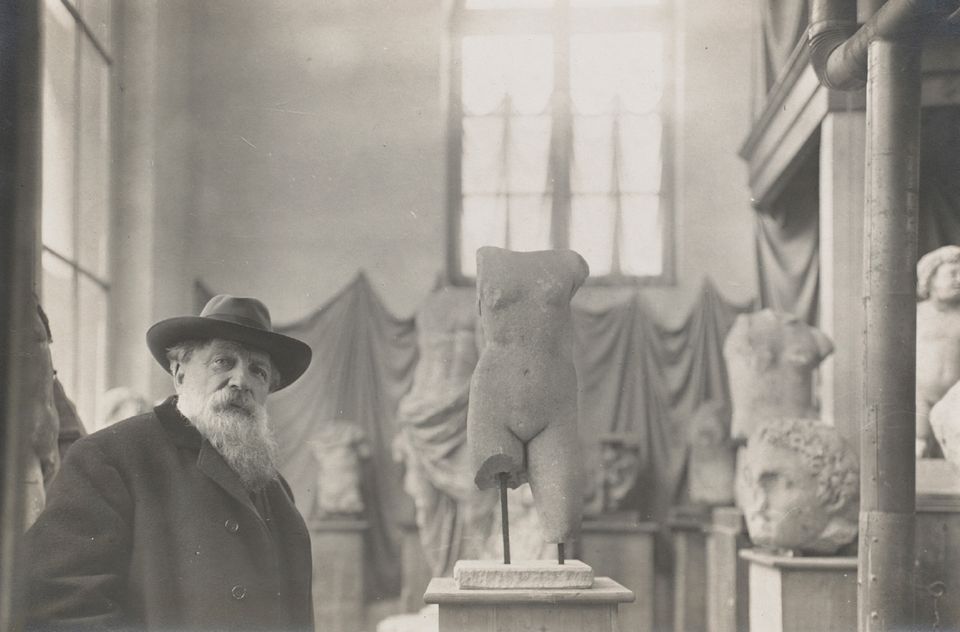 Rodin in his Museum of Antiquities at Meudon on the outskirts of Paris, around 1910 Photo: Albert Harlingue; omage: Musée Rodin

Rodin and the Art of Ancient Greece (until 29 July) at the British Museum sheds fresh light, literally and figuratively, on the relationship of Rodin’s sculpture to that of the Parthenon. Literally, because all the wall partitions of the Sainsbury Exhibitions Gallery have been removed, creating a naturally lit open hall stretching from the entrance in the Great Court to the glass doors of the garden at the back of the building. This makes the display area roomy and airy and allows the sculpture to be shown in the round. The metaphorical light that shines in the show is the juxtaposition of Rodin’s translation (never transcription) of around 15 of the British Museum’s Parthenon Marbles into his own various works, illuminating his creative processes. Thus, the clichéd Kiss (1882) revives when compared to its prototype of the reclining goddesses from the East Pediment, while a vigorous male nude from the Frieze’s cavalcade lends gravitas to the Age of Bronze (1875-76). Rodin carefully studied Pheidias’s Parthenon sculptures, his aesthetic idée maîtresse, on several occasions from 1881 until his death in 1917.

James Cook: the Voyages (until 28 August), which opens today at the British Library, marks 250 years since the captain set sail from Plymouth to Australia and New Zealand in command of the ship Endeavour. The exhibition also explores two further voyages, undertaken by the Resolution and Discovery, and is centred around the Library’s extensive collection of maps and journals written aboard the ships. The show includes other objects from the first voyage, such as the mouth parts of a squid; the first European illustrations of Hawaii, of the Antarctic and of kangaroos; and south Pacific jewellery and instruments, stretching from Tahiti to Tierra del Fuego. Among the highlights are illustrations by Tupaia, a Tahitian navigator who joined the voyage to New Zealand and recorded a meeting between the naturalist John Banks and a Maori—who offers the Englishman a lobster in exchange for some cloth.

Tate Britain’s Art Now series, small free displays of emerging artists, often does not receive the fanfare it deserves. Past shows have included artists such Rachel MacLean, Pablo Bronstein and Roger Hiorns. The latest in the series, which opened this week (until 27 August), is devoted to the South African-born, London-based artist Lisa Brice. New and recent drawings and paintings, many in her signature ultramarine blue as well as crimson red, continue Brice’s exploration of the art historical depictions of the nude. Although there seem to references to works by Degas, Picasso and Gauguin, Brice’s semi- and fully-naked female figures are very much modern women not playing to us, the viewer, but caught up in their own lives in scenes that appear to meld fact and fiction. The artist has spent extended time in Trinidad since 1999 and her intense palette conveys the island’s tropical heat in these strange and compelling scenes.