From Gainsborough's friendly cows to Giacometti's depictions of people 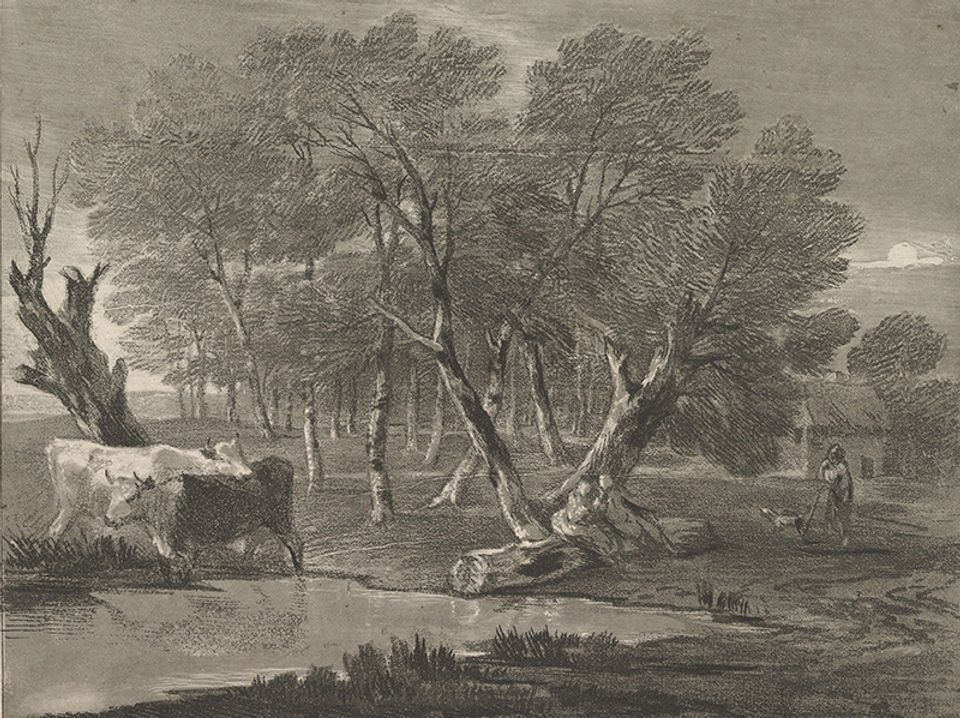 Thomas Gainsborough, Wooded Landscape with Cows beside a Pool, Figures and Cottage (around 1780) The Metropolitan Museum of Art, Harris Brisbane Dick Fund

Fans of Thomas Gainsborough’s larger canvases, with their beautiful countryside scenes, skilfully-rendered ruffles and keen illustrations of character, will appreciate seeing another side of his artistic production at the Morgan Library and Museum. The small exhibition Thomas Gainsborough: Experiments in Drawing (until 19 August), with 22 works on paper pulled mostly from the museum’s collection, shows studies for works, pastels, drawings and early sketches. The pieces are charming and delightful. Look out for a pair of cuddling cows in the etching and aquatint Wooded Landscape with Cows beside a Pool, Figures and Cottage (around 1780) and a delicate foot peeking from beneath a skirt in the chalk drawing Study of a Woman Holding a Shawl (1765-70). The black chalk drawing A Woman and Three Children (1780-85) wonderfully captures expression and gestures despite its sparse use of line. The show is also an enjoyable and informative romp through Gainsborough’s techniques and use of materials, such as varnishing over chalk drawings (his own secret “recipe”).

Revel in the technique and materiality of the New York-based artist Ursula von Rydingsvard’s work at her Galerie Lelong solo show, TORN (until 23 June). Her massive, abstract sculptures in cedar with a subtle graphite patina have heavily worked, cave-like holes and craggy surfaces, but also reveal the lines of the studs piled together to make them. Cast from a similar cedar model and standing in its own small, darkened space is a freestanding resin sculpture, lit from within and glowing a dark ocean blue, which has an almost tornado-like narrow funnelled shape and stormy energy. The exhibition also displays a recent series of drawings, Kasia (2016), in silk, distressed Merino wool and pigment on handmade linen paper, which von Rydingsvard created at the Brooklyn paper-making studio Dieu Donné. A beautifully rough, gestural quality unites these works in varying media, which also includes a large bronze cast from another cedar model.

The Solomon R. Guggenheim Museum organised the first museum presentation of the Swiss-born artist Alberto Giacometti in 1955. More than six decades later, it is now the first US museum to stage a comprehensive show of the artist’s work in more than 15 years. Simply titled Giacometti (until 12 September), the exhibition fills the museum’s Frank Lloyd Wright-designed rotunda with nearly 200 sculptures, paintings, maquettes, drawings, journals and sketches, many that are being shown in the US for the first time, as well as a video of the artist labouring in his small studio in the 14th Arrondissement of Paris, where he worked for more than four decades. The show has been primarily assembled with loans from the Giacometti Foundation in Paris, giving visitors the chance to see some of the lesser-known works of the artist’s oeuvre.