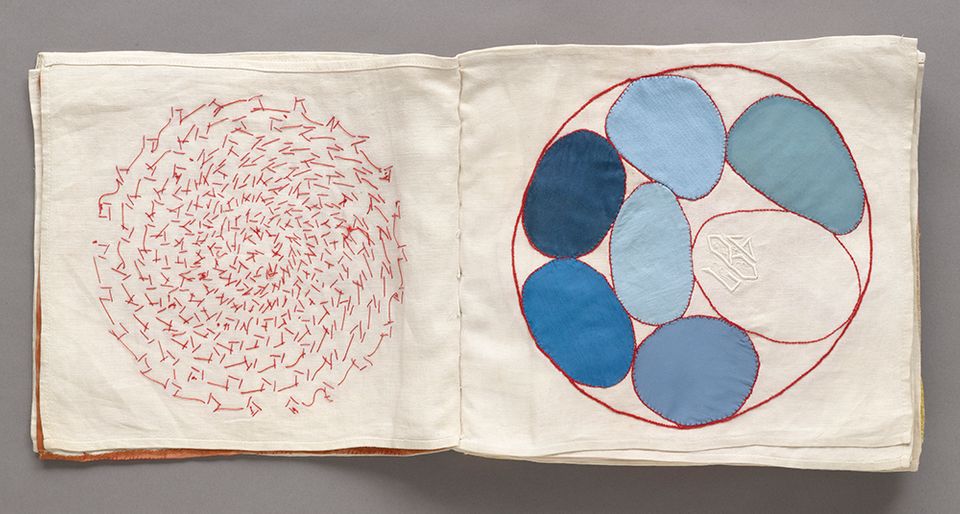 Louise Bourgeois, No. 4 of 34 from the fabric illustrated book Ode à l’Oubli (2002). The Museum of Modern Art, New York. Gift of the artist 2017 The Easton Foundation/Licensed by VAGA, NY

Giant spider legs descend down the bars of a cage with a cracked door in the Museum of Modern Art’s Marron Atrium, on view as part of the exhibition Louise Bourgeois: an Unfolding Portrait (until 28 January). This frightening arachnid motif of motherhood continues throughout the exhibition, which is mainly dedicated to the artist's lesser-known printed works, including etchings and screen prints, which carry the same high emotional tenor as her sculptures. Not to be neglected are the fabric books such as Ode à l’Oubli (2002) which includes an arrangement of egg-like coloured scraps on monogrammed linen. The show also displays smaller sculptures like an untitled head in fabric and steel (1998). But, like any good mother, Bourgeois denied any “rivalry” in her affection between the mediums.

Trigger: Gender as a Tool and a Weapon at the New Museum (until 21 January), if a bit chaotic, gives a good overview of art that looks at gender beyond the binary. Around 40 artists, born between 1950 and 1990, present works in a variety of media, from Vaginal Davis’s fleshy clay and stucco sculptures, which use beauty products such as nail varnish, to Ellen Lesperance’s gouache works modelled on knitting patterns, referencing traditionally feminine domains designated as “craft”. The videos, by artists such as Stanya Kahn and the collective House of Ladosha, are among the most engaging works on view. Take the time to watch Sharon Hayes’s 38-minute video Ricerche: three (2013) in which the artist asks 35 students at a women’s school in Massachusetts, Mount Holyoke College, about gender, sexuality and sex—at moments touching, enlightening or funny.

“I am accused, constantly, of making art about my own identity,” Jimmie Durham said in 2011. “I never have.” But the idea that identity is not static and is at least partly self-invented is strengthened at every turn in Jimmie Durham: at the Centre of the World at the Whitney Museum, the artist’s first solo show in the US in 22 years. Some of the 120 works on view reference his personal history and claim of Cherokee ancestry, and the show has provoked fresh debate over this disputed heritage. In one sculpture, Self-portrait (1986), the artist depicts himself with red skin and a painted face. In the last work in the show, Self-Portrait Pretending to Be a Stone Statue of Myself (2006), Durham holds a rock the size of his head in front of his face, so that he is completely obscured.