From Medieval time to a "sense of urgency" 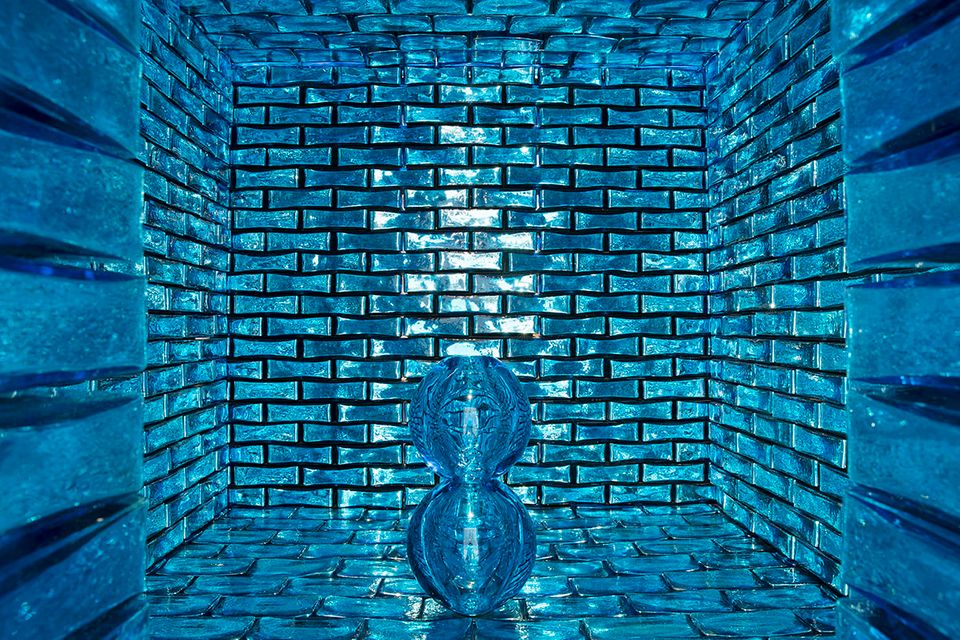 Jean-Michel Othoniel offers eyes a calming respite from a turbulent world in his latest show, Dark Matters (until 15 April), at Perrotin's new Orchard Street gallery. The artist, whose eye was nourished by the collection of American Minimalists like Donald Judd at the Musée d'art contemporain in his native Saint-Éienne, France, presents two new bodies of work that aim to bring viewers into quiet contemplation. On the third floor, a new series of his trademark "bead" sculptures, cast in polished aluminium, are suspended from the ceiling, their tornado shapes twisting gently in the cross currents and reflecting the viewer many times over. Below, on the first floor, are a new series of works using glass bricks that are the result of a collaboration with artisans in India, who helped create the cerulean and amber-hued works laid on the floor and hung on the wall like windows. A small aperture in the wall leads to a tiny chapel-like structure replete with fountain. Simultaneously rigorously ordered, yet individually unique due to their handmade nature, the bricks glow with an otherworldly luminosity that in colour pays homage to the conceptual works of Felix Gonzalez-Torres, another artist with an interest in time-based transformation and iteration.

For the fourth New Museum Triennial, titled Songs for Sabotage (until 27 May), the co-curators Gary Carrion-Murayari and Alex Gartenfeld have selected works by 26 artists who all “have a certain degree of political and social engagement”, Carrion-Murayari says. The works, in a variety of media, share a pressing sense of urgency. The US artist Violet Dennison, for instance, has covered a wall with dying seagrasses pulled from the beaches of Miami, Florida, as a commentary on global industrial production and its impact on the world’s oceans. The Spain-based Peruvian artist Daniela Ortiz’s series of ceramic sculptures is likewise timely. She has envisioned new public monuments for Lima, Barcelona and New York that salute indigenous community leaders—which “obviously resonates with discussions we’re having here about monuments in the US”, Carrion-Murayari says.

Did you know that some Medieval European royalty counted the centuries by their lineage from the Trojans? A magnificent 60ft-long scroll that shows this history is one of around 55 objects, which also include books, calendars and manuscripts, in the Morgan Library & Museum exhibition Now and Forever: the Art of Medieval Time (until 29 April). The show gives a fascinating look at how time in the Middle Ages differed from how we measure time, for instance, dividing the day into religious offices—but can also be very similar, such as the use of the 12-month calendar. “Time after Time”, a section on death and the afterlife, includes a depiction of hell with fantastical and frightening beasts in a manuscript commissioned by Catherine of Cleves (around 1290), one of the curator Roger Wieck's favourite works on view. “An atheist can walk into the exhibition and still relate to images of a fiery hell or a cloud-filled heaven,” he says. “There are things about the Middle Ages that are still on our minds.”