From righteous indignation to interactive play 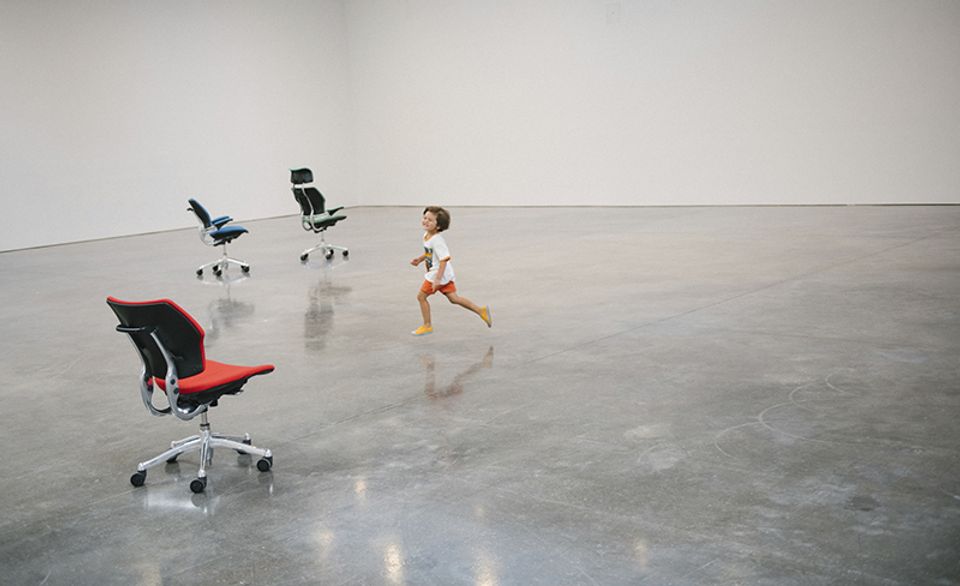 Take a seat—or not. The ordinary-looking office chairs in Urs Fischer’s PLAY, at Gagosian Gallery on 21st Street (until 13 October), might seem like the kind you roll across your cubicle. But they are actually robotic sculptures that are programmed to behave in reaction to the visitors in the gallery. Walk towards one and you might find it shies away from you; stand watching their uncanny movements for too long and you might find a group slowly turn and head your way in a Hitchcockian scene. “The chairs choreograph you as you choreograph the chairs,” Fischer told us, adding that the idea for the show came out of his “frustrations” with art. “You want art to do more than it does,” he said. “I want it to give me a little more.” So, with a team of software engineers and the choreographer and artist Madeline Hollander, Fischer conceived of this interactive installation, which comes with a big, block-lettered warning: “COLLISIONS MAY OCCUR.”

Tiring of cynicism, and eager to harness righteous indignation about rampant abuses of power? This is your last weekend to bear witness to an activist oeuvre in Sue Coe: Graphic Resistance at MoMA PS1 (until 9 September). A mix of drawings, prints, large-scale collages and newspaper op-ed illustrations, the show samples the British-American artist’s varied calls to action, beginning with her 1980s works documenting the effects of Reagan-era policy and social conservatism as well as sexual violence. (Take in her 1983 mural-size collage painting Woman Walks into Bar — Is Raped by Four Men on the Pool Table — While 20 Watch, which helped establish her reputation.) “Neutrality is no longer a position we can afford,” the museum quotes her as saying, and the works on view also include rousing indictments of sexism, racism, economic inequality, xenophobia and animal cruelty. (Coe grew up near a slaughterhouse in England, and some of her most powerful work takes aim at industrialised animal slaughter.) The show is refreshingly direct, while also reminding the viewer that the artist fits into a tradition of politically engaged artists stretching from Goya to Ai Weiwei.

Remind yourself that summer is not (technically) over with a trip to see Maren Hassinger: Monuments (until 10 June 2019) at Marcus Garvey Park. The outdoor exhibition is part of inHarlem, the Studio Museum in Harlem’s off-site programming focussed on community engagement while their new galleries are under construction, co-presented with the Marcus Garvey Park Alliance and NYC Parks. Hassinger, who is based in the neighbourhood, constructed all of the sculptures out of branches pruned from trees in other New York City Parks. The works were a collaborative effort, she says, with 75 volunteers from the Studio Museum’s Teen Leadership Council and Expanding the Walls Programme, who contributed their physical labour as well as their ideas. This result of this (re)cycling of material and landscape are eight massive, abstract pieces that respond to, resist and reimagine the horticulture and architecture that surrounds them, and might make you think differently about the urban landscape.