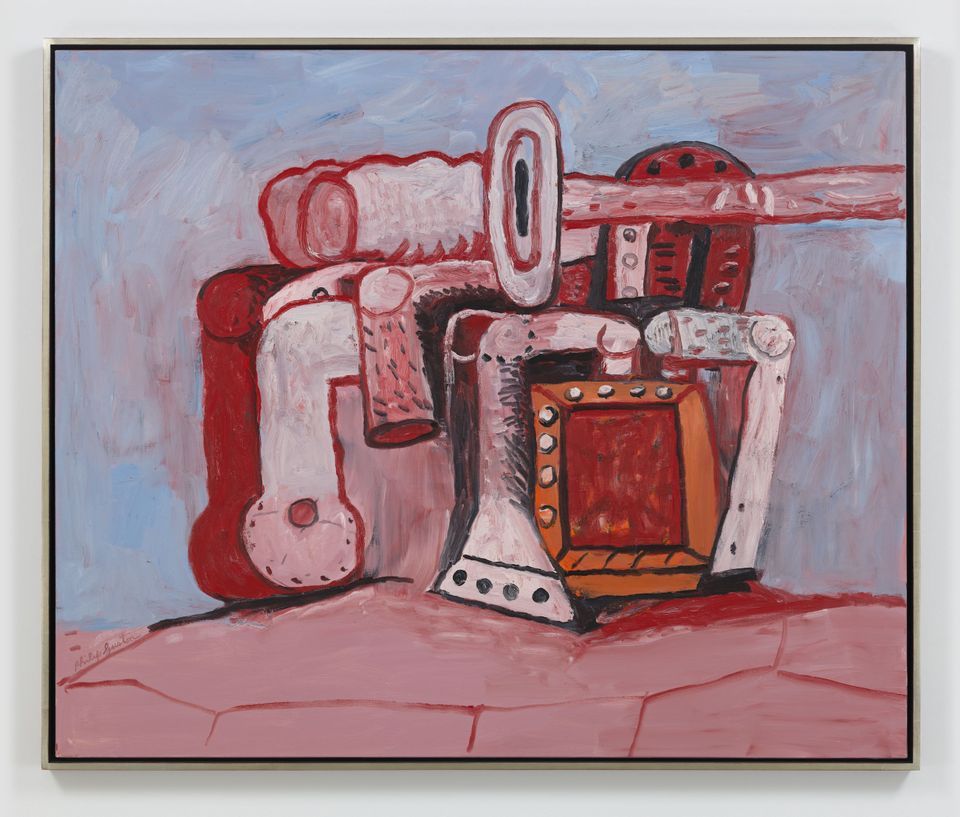 “It’s a play on painterly sculpture and sculptural painting. When you look at Philip Guston’s work, it is sculptural, and when you look at Eva Hesse’s sculpture, they have this painterly quality to them. In fact she always had a dream of being a painter,” says Marc Payot of Hauser & Wirth of the gallery’s presentation at Tefaf of Hesse, Guston and Louise Bourgeois together. This Guston painting, finished the year before the artist died, “combines all the visual elements that were important in his work: the horizon line, the shield, the canvas with nails hammered into it, and the bodily forms,” Payot says. “Then there is the blue background, a colour which is more commonly seen in his abstract works of the 1950s and 60s”. The painting sold on preview day for $5.5m.

The Düsseldorf-based gallery Beck & Eggeling devoted its room upstairs in the Park Avenue Armory to a display of post-war Zero group works by Heinz Mack, Otto Piene and Günther Uecker. Two of Uecker's nail works shown have been in German private collections since they were bought from the artist, in 1964 and 1972 respectively. Centre stage is a large work, Strömung (1972). “It was shown at the Guggenheim in New York in 1972, and then returned to a collector’s home near Düsseldorf until now,” the dealer Michael Beck says. “I have been trying to persuade them to sell it for four or five years. This is the first time it has been shown in public, and the first time it has returned to New York.” Most desirable in Uecker’s work, Beck says, “is a feel of movement in the nails, like wind blowing through a field, as in this work.” The piece has an asking price of €2.2m.

Although Calder is more closely associated with the circus, the artist also maintained a love for ballet and theatre throughout his life, and even designed the sets for Erik Satie’s Socrate in 1936. He created this mobile “ballet-object” as a maquette for a sculptural commission by the power company ConEd for its pavilion at the 1939 World’s Fair exposition in New York. Ultimately unrealised, the figures in this piece later provided inspiration for The Four Elements (1961), a monumental sculpture for Stockholm’s Moderna Museet. “As Calder created Dancers and Sphere for the New York Fair in 1939, we thought that it was a nice return to bring back the work to the United States 80 years later for a similar occasion”, says Julien Seroussi, the gallery director. This whimsical work was previously in the collection of Yves Saint Laurent and Pierre Bergé.