The actor debuted a new performance and installation in the Breuer building, before protestors crashed the party at the Costume Institute’s annual celebrity fundraiser 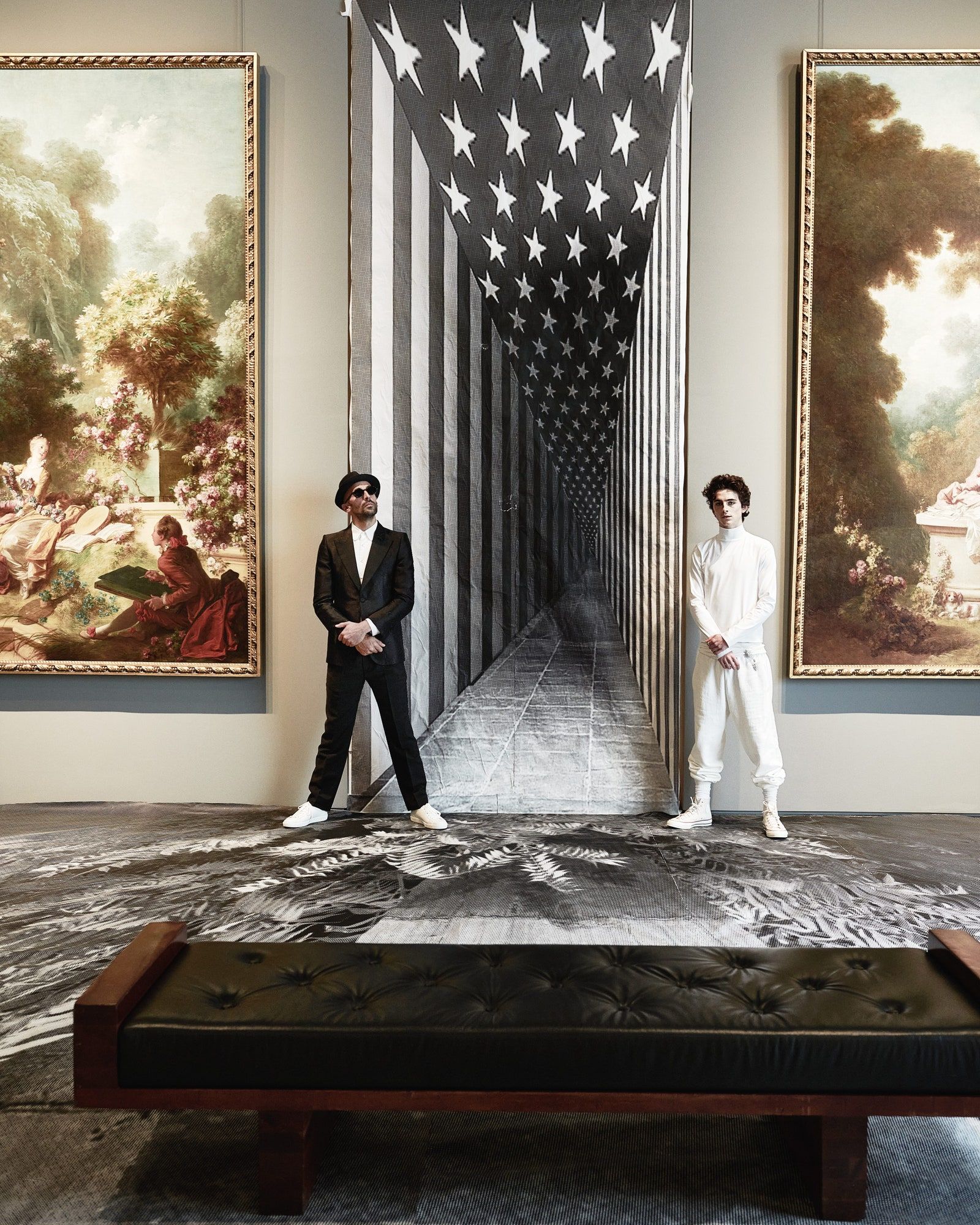 The Metropolitan Museum’s annual Costume Institute fundraising gala started things off in a surprise location on Monday evening. Instead of walking straight up the steps of the institution’s home on Fifth Avenue and 82rd Street, event co-chair and actor Timothée Chalamet kicked off the festivities a little further downtown on Madison Avenue and 75th Street, in the Marcel Breuer-designed building that once housed the Whitney Museum—and then the Met, and now the Frick Collection—with a new performance and installation created in collaboration with the French street artist JR. And in a fitting tie-in with event partner Instagram, it all rolled out on social media.

The work, which debuted on Chalamet’s Instagram Live stream, started with the Dune actor sitting in quiet contemplation in the Frick’s Fragonard galleries, before he got up and tore through a flag-themed paper banner by JR plastered over a doorway to explore the rest of the museum. “We enter in an American flag, to find a place, an identity, a position, a future, between the stripes and the stars,” JR told the gala’s sponsor, Vogue magazine. “To get to the end, we need to confront our rifts, our flaws, those of our nation, of our family and our own cracks which have been amplified by two years of loneliness, anger, fear, confrontation.”

Chalamet, already dressed in his Haider Ackermann-designed sweatpants for the gala, met up with JR outside the museum and walked the ten blocks up to the Met. There he joined his fellow youthful co-chairs on the red (or actually beige) carpet: the musician Billie Eilish, who wore a classic Marylin Monroe-esque nude-coloured Oscar de la Renta gown; the athlete Naomi Osaka, who wore a custom Louis Vuitton dress and cape designed with the help of her older sister Mari; and Presidential Inauguration poet Amanda Gorman, who wore a stunning blue Statue of Liberty-inspired and crystal-encrusted Vera Wang gown. The gymnast Nia Dennis, wearing a super-heroic adidas by Stella McCartney bodysuit, stole the show with an acrobatic entrance accompanied by the Brooklyn United Marching Band.

We are live from the 2021 #MetGala with @BKunitedMB. Don't miss a single minute from the red carpet. Here's how to watch, now: https://t.co/IDE1MRB1yF pic.twitter.com/JcywpOb21v

Other famous names at the fundraiser drew on political and social themes as a nod to the Costume Institute’s two-part exhibition, In America: A Lexicon of Fashion. They included the New York Congresswoman Carolyn B. Maloney, whose dress stridently declared her aim to pass the Equal Rights Amendment, and New York representative Alexandria Ocasio-Cortez, whose white Brother Vellies dress boldly exclaimed in bright red letters: "TAX THE RICH". In a wonderful marriage of art history and activism, Schitt’s Creek actor Dan Levy proudly wore an ensemble designed by Loewe’s Jonathan Anderson, based on an untitled work in the Whitney’s collection by the artist and Aids activist David Wojnarowicz. And in true American fashion, a crowd of protestors took the opportunity of the high-profile event to call for racial justice. “The NYPD has a total financial allocation of $11 billion per year. This money goes towards racist policing that destroys Black and brown communities while people who are struggling do not get the resources they need,” a flyer passed out at the impromptu rally read, according to the Daily Mail. “CARE, not COPS, is the answer.” Police arrested some of the demonstrators for minor offenses, The New York Times reported.