Visitors to the 16th-century Scuola Grande di San Rocco in Venice, home to a spectacular cycle of wall and ceiling paintings by Tintoretto, are now able to view these masterpieces in a new light—literally. The 25 pictures in the Sala Superiore (upper hall) are being transformed by a project to clean centuries’ worth of grime from the sculpted marble that surrounds them, while a new LED lighting system has been installed in the Sala dell’Albergo. The three-year restoration project, which began in 2014, is sponsored by the luxury Swiss watchmaker Jaeger-LeCoultre.

The Scuola Grande di San Rocco is one of the best preserved of the city’s six major confraternities (known as the scuole grandi) that performed charitable work and took care of the interests of the arts and professions. Several architects, including Bartolomeo Bon and Antonio Scarpagnino, had a hand in the building’s construction, which began in 1517 and finished in around 1558.

In 1564, a competition to decorate the Sala dell’Albergo was announced. Instead of submitting for review a sketch of Saint Roch—the plague saint after whom the scuola is named—Tintoretto presented a finished canvas. Despite some opposition from the scuola’s councillors, including one who pledged 50 ducats towards the decoration if Tintoretto was not given the commission, the artist received the commission and worked on canvases for the entire building up until 1587.

“Cleaning the marbles has been a long process,” says the vicar Demetrio Sonaglioni, explaining that centuries of residue from burning candles has to be removed. Work began on the mullioned windows and on 17th-century sculptures by Girolamo Campagna on an altar on the floor above before moving down to the Sala Superiore. The private restorer Monica Vial leads a team that applies strips of wet paper to the marble and allows them to sit for several days until the dirt becomes moist and can be brushed off. Steam is also being used to remove the grime. 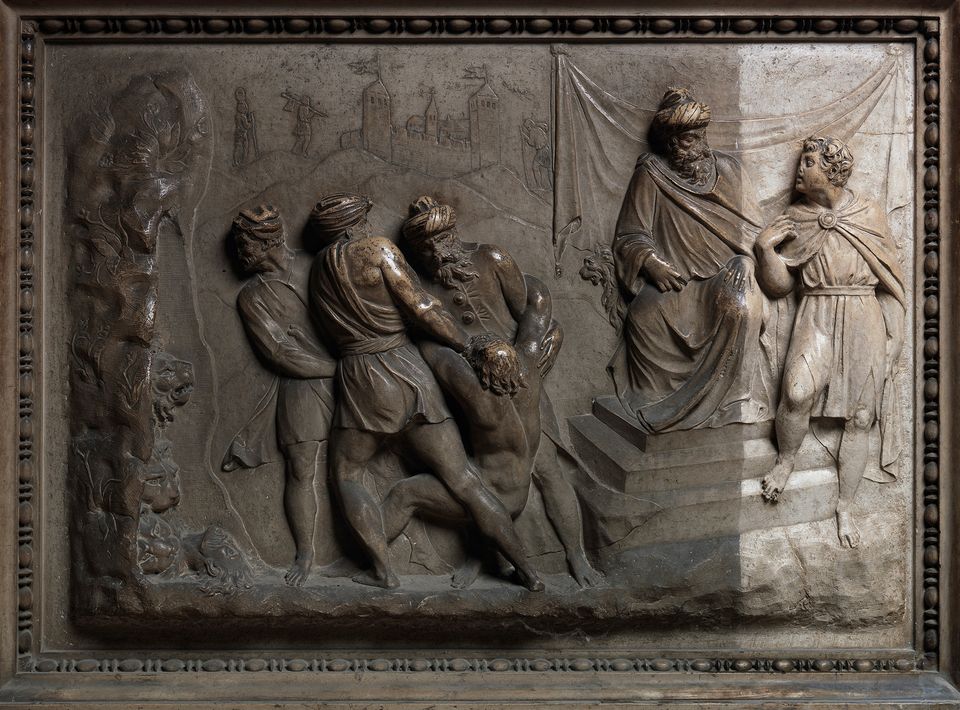 The removal of grime from the marble panels has uncovered their original greyish hue. Image courtesy of Scuola Grande di San Rocco

The results are striking. Marble panels that had long masqueraded as bronze works, due to the accumulation of grime, have regained their greyish hue, and the finer details of the sculpted scenes are crisp and legible. The overall effect on the brightness of the room is dramatic and offers visitors a glimpse of how the space might have looked originally. “The marbles are just as important as the Tintorettos [to the building’s overall decorative scheme],” Sonaglioni says. The scuole competed with each other to build the best, most sumptuous building, so only the finest craftsman were hired. “[They] celebrated the importance of the buildings with fine carvings and paintings,” he adds.

In the Sala dell’Albergo, which boasts scenes of the Passion of Christ and a roundel on the ceiling with a depiction of Saint Roch, a new lighting system guides visitors around the room. Twenty remote-controlled LED projectors are trained to highlight particular aspects of each painting, starting on the ceiling and moving to the canvases on the walls. “We’re using the lights to help to tell the story of the Passion,” Sonaglioni says, adding that he would like to install a similar lighting scheme in the Sala Superiore.

Jaeger-LeCoultre has a special affinity with Venice, having been one of the key sponsors of the Venice Film Festival for the past decade. The company funds a variety of heritage restoration projects across the globe, from the preservation of films to the restoration of historic clocks. Georgia Noutsi, the firm’s UK marketing and retail manager, says: “We find a need and then do our best to ensure that need is met.”