Exhibition first opens at Norway’s new Munch Museum, where Emin’s giant bronze The Mother will be permanently installed outside 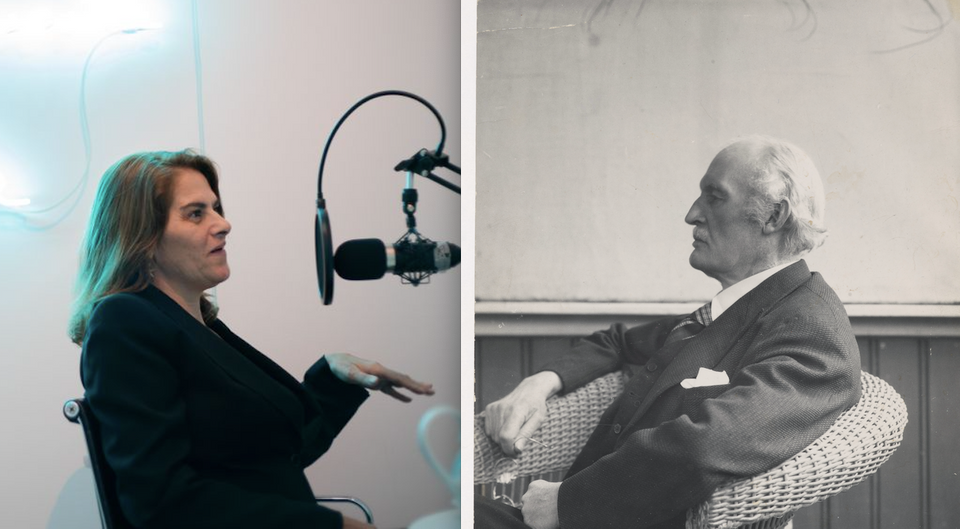 Tracey Emin, speaking on The Art Newspaper podcast earlier this year, and Edvard Munch in around 1938 Emin: © David Clack. Munch photo: courtesy of the Munchmuseet

An exhibition pairing the British artist Tracey Emin with her “hero” Edvard Munch will travel to the Royal Academy of Arts in London in November 2020 after first opening at Oslo’s new Munch Museum next spring.

Emin says she “never imagined” she would have a show at the Royal Academy “and not in a million years did I ever think that I’d show with my hero Munch… I’m lucky!”

Details of the exhibition are still largely under wraps, but it is expected to draw on the parallels between the two artists’ work—both are masters at expressing the human condition, often agonisingly so. Emin has said she first fell in love with Munch’s work because he made a painting called Jealousy that was about himself. “I thought it was an incredibly open, self-effacing and defiant thing for a man in the early 20th century to do,” she told the Independent newspaper in 2009.

If Emin herself is to select works by Munch for the show, as she did in 2015 for an exhibition with Egon Schiele at the Leopold Museum in Vienna, there are rich pickings at the Munch Museum. It owns 45,000 objects bequeathed to Oslo by the artist on his death in 1944, including 1,100 paintings, 6,800 drawings and 18,200 works of graphic art.

The Royal Academy show will be a homecoming in many ways for Emin, who became a Royal Academician in 2007 and was the Royal Academy Schools’ professor of drawing between 2011 and 2013. The Royal Academy is also where Emin first rose to prominence in 1997, exhibiting her appliquéd tent, Everyone I Have Ever Slept With 1963-1995 (1995), in Charles Saatchi’s Sensation exhibition, which garnered tabloid headlines and cemented many of the YBAs in the public consciousness.

Over the past few years, Emin has eschewed the controversy of her earlier work in favour of painting and—most recently—bronze sculptures, a monumental example of which will be permanently installed outside the Munch Museum on Museum Island in September 2020. The Mother, a 9m sculpture of a kneeling woman, which Emin says could be her mum, beat six other proposals by artists including Olafur Eliasson and Ragnar Kjartansson to be awarded the prestigious commission. Emin’s mother Pam died in 2016.

“I can’t believe it, it sounds so untrue. I am having my mum, a giant bronze, The Mother, in front of the Munch Museum at the same time [as being the] opening show at the Munch Museum,” Emin told The Art Newspaper Podcast in February at the launch of her exhibition, A Fortnight of Tears, at White Cube Bermondsey. The show included a smaller, three-metre version of The Mother.

“It’s going to be fantastic, this giant bronze of my mum, this older woman, this old lady, taking root in front of the Munch Museum, protecting Munch’s work, legs open towards the fjord, welcoming travellers. I’m so happy about it, I never thought I’d get it,” Emin says.

Describing being paired with Munch for the exhibition as “like a dream”, Emin says: “It’s everything I ever wanted as an artist. It’s unbelievable. And it’s partly because I am doing the right thing. I’m going towards the direction of what I really love, not what people think I should be doing. I think that’s what was recognised when I won the commission for The Mother. My love for Edvard Munch shone and shone and shone.”

The Munch Museum’s recent exhibition programme has mostly focused on pairing Munch with artists who have explored similar themes in their art, including Vincent van Gogh, Jasper Johns, Robert Mapplethorpe and Marlene Dumas. The institution’s new building is due to open next May in Bjorvika, a waterside area in central Oslo, and will join the Norwegian capital’s Snøhetta-designed Opera House and a new public library also due to open next year that will house a work by the British artist Katie Patterson.

Emin’s last major institutional exhibition in London was a mid-career retrospective at the Hayward Gallery in 2011, although it did not include her two most famous works: the tent—which was destroyed in the 2004 Momart warehouse fire—and My Bed (1998). She is currently the subject of a show at the Musée d’Orsay in Paris, for which she has selected rarely seen drawings from the museum’s collection to hang alongside her own (until 29 September).