Production of The Mother monument took longer than expected due to its size and also because of how badly the UK was hit by the pandemic, city officials say The bottom section of Tracey Emin's The Mother at AB Fine Art Foundry in London. The foundry's Chloe Hughes, who is in the foreground, gives a sense of scale of the sculpture Photo: Harry Weller. Courtesy of Tracey Emin Studio

Tracey Emin’s nine-metre-high bronze sculpture The Mother will be shipped from London to Oslo over the summer and should be in situ, overlooking Oslo waterfront, by the end of the year after initial delays.

The large-scale piece, depicting a kneeling woman over an invisible child, was originally meant to arrive by boat via the Oslofjord in March this year. “Because of the sculpture’s size, production has taken longer than the artist first envisioned. This is linked to the UK being hit particularly hard by the pandemic,” says a statement from the press agency Culture Oslo, which represents the city organisations behind the work such as the Agency for Cultural Affairs.

Culture Oslo adds that the size of the sculpture, which weighs several tons, also made transporting it from London more complicated than originally anticipated. Emin told the Guardian last year that the work was made of 97 separate pieces which are welded together in three sections. 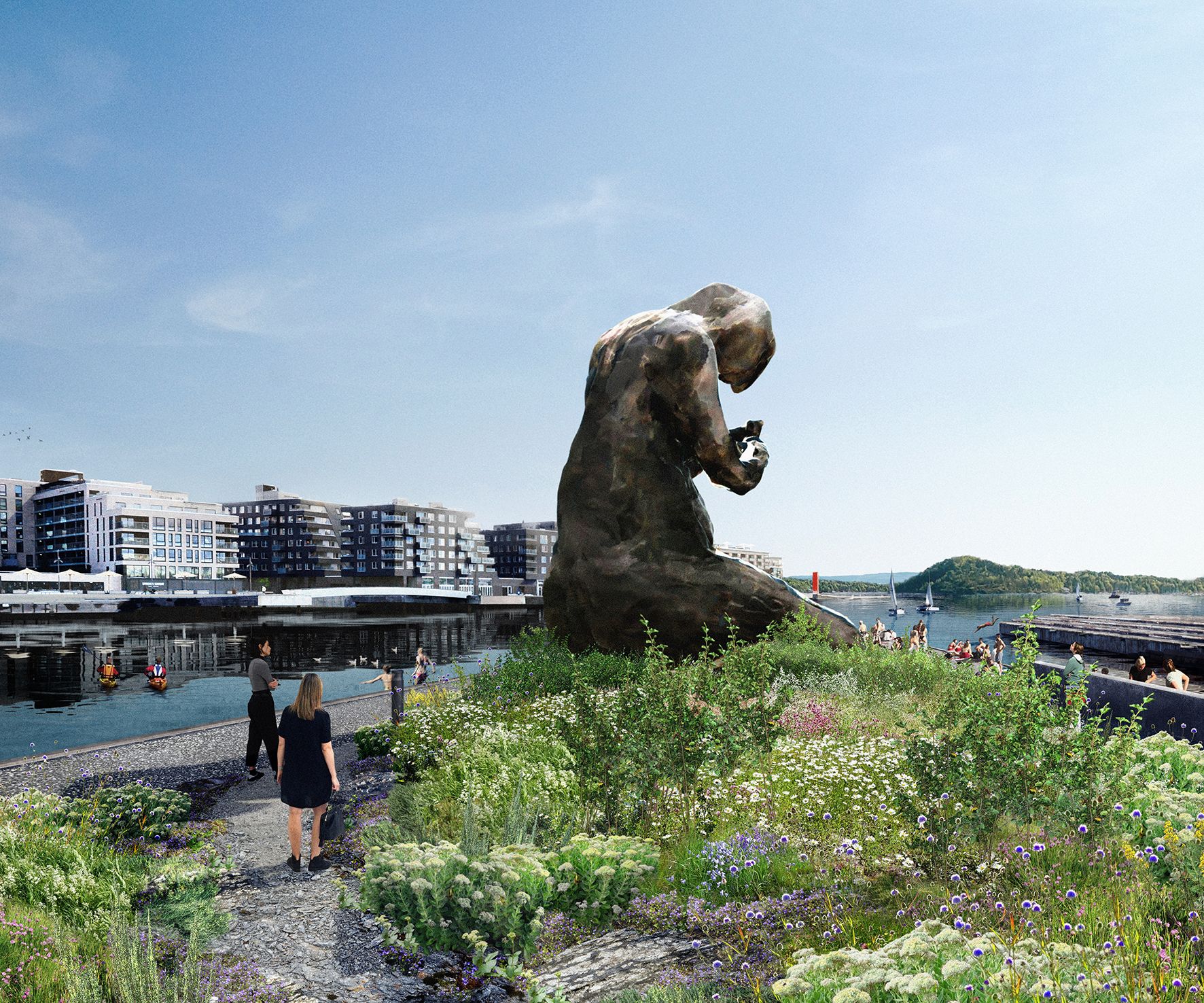 A rendering of Tracey Emin's The Mother on the Museum Island in Oslo, facing the fjord Illustration: J & L Gibbons

“When The Mother arrives, she will take her place kneeling in a little flower meadow on a brand-new plot in Oslo outside the new Munch Museum,” says Culture Oslo. The new space, designed by UK landscape architects J & L Gibbons, will have a seating area and be accessible from land via a 40-metre-long bridge from the harbour promenade and the new museum, which is due to open in the autumn.

A spokesman for Emin’s studo says that during the first lockdown in the UK last spring, both foundries working on The Mother's production were forced to close according to the government's guidelines. “Once they reopened, they inevitably had to furlough a number of their staff to ensure they were socially distant. The welfare of the team was the priority. Covid also caused delays in the shipment of bronze... I inspect the progress weekly and I am pleased to say the monumental sculpture is well underway. We are very much looking forward to installing the work by the end of the summer,” he says.

Emin told The Art Newspaper podcast The Week in Art in 2019: “It’s going to be fantastic, this giant bronze of my mum, this older woman, this old lady, taking root in front of the Munch Museum, protecting Munch’s work, legs open towards the fjord, welcoming travellers. I’m so happy about it, I never thought I’d get it.” The exhibition pairing Emin with her “hero” Munch has been extended at the Royal Academy of Arts in London until 1 August (the show is due to re-open on 18 May subject to Covid-19 restrictions).