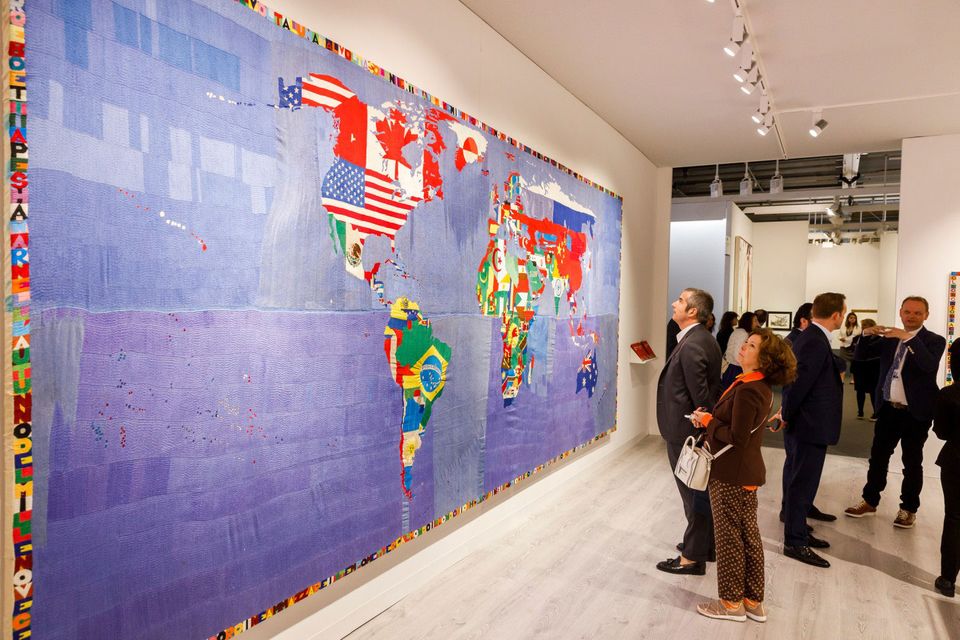 Art fairs, such as Art Basel, are still a major source of revenue © Art Basel

“It was a tricky year, but not disastrous.” So says the cultural economist Clare McAndrew, whose Global Art Market Report is published by Art Basel and UBS today.

Following two years of growth, trade conflicts between the US and China, political unrest in Hong Kong and a protracted Brexit all contributed to a 5% dip in the global art market, which totalled $64.1 billion in 2019.

The French trade—the only major market to grow last year—appeared to pick up some of the slack. There, sales rose 7% in value to $4.2 billion, increasing France’s global share from 6% to 7%. Auction sales increased 16% to more than $1.6 billion. Both dealers and auction houses reported moving inventory across the border from Britain to Paris and Amsterdam ahead of the Brexit deadline, a “pre-emptive move, which could account for the growth”, McAndrew says. Whether the French market will continue to expand is up for debate; as the report points out, overregulation and tax complexities are still hindrances to growth in France.

If the Chinese market in 2020 has been blighted by the coronavirus epidemic, 2019 was marred by “escalating political protests reduced international visitors and increased anxieties in the region”, according to the report. Sales in the auction market in mainland China fell 9%, while in Hong Kong this decline was even more pronounced at 25%.

Overall, the Chinese market fell by 10% to $11.7 billion, while the perennially dominant US market dropped 5% to $28.3 billion.

Globally, the very top of the auction market cooled in 2019, with few very large estates coming to the block. Works sold for over $10m at auction were the worst performing in 2019, declining 39% in value—and with 35% fewer lots sold.

In times of uncertainty, collectors often plump for the safety of private sales over riskier public auctions and this was borne out last year. Auction sales took the biggest hit, diving 17% to $24.2 billion, while, conversely, private sales at auction houses were mostly up.

In 2019, the pendulum swung further in the direction of dealers who reported a 2% increase in sales to $36.8 billion. Compared with the auction houses, their market share increased 4% up to 58%, a position that is likely to grow in 2020 with scenarios such as the Donald B. Marron collection being sold by Pace, Gagosian and Acquavella Galleries.

Art fairs continue to be a key source of revenue—and expenditure (almost a quarter of dealers' budgets). In 2010, 30% of galleries’ income was derived from art fairs, rising to 45% in 2019 when sales reached $16.6 billion. For the first time, McAndrew asked dealers to provide a breakdown of art fair sales, revealing that 15% of deals were done before the show ($2.5 billion), 64% during the fair ($10.6 billion), and 21% as a direct result of exhibiting at the fair ($3.5 billion).

For many collectors, art fairs are now the first point of contact with a gallery. “That’s their introduction to the art market,” McAndrew says. On average, high-net worth collectors say they attend 39 art events a year. Art fairs account for seven of those events, on a par with gallery shows.

With art fairs comes the question of airline travel and its impact on the climate. According to McAndrew’s report, 58% of high-net-worth collectors say it is “essential or a high priority” that they offset their carbon footprint from art-related travel over the coming years. However, when asked about their travel plans in the next 12 months, 67% of collectors say they plan to travel to more fairs and only a handful (less than 20) say they would reduce travel for ecological reasons.

Dealers, meanwhile, currently average 12 flights a year, including seven short-haul flights (less than six hours) and five long-haul flights. Larger galleries with annual sales of more than $10m averaged 23 flights a year. According to myclimate.org, and based on economy class travel, it is estimated galleries could each emit close to 27 metric tons of CO2e on average from air travel alone every year.

Apart from travel, the crating and shipment of art works is another major area of concern. The sustainable packaging company Rokbox estimates that a small crate (43 x 43 inches) with a 5-kilogram work of art shipped from New York to Hong Kong by air has a carbon footprint of around 0.91 tons of CO2e—the equivalent of adding 51 bags of rubbish to a landfill or driving nearly 4,620 kilometres in a car.

One dealer sums up the dilemma, saying: “We could reduce our travel and the transport of works by only selling locally, but not only would that make it impossible to sustain our bottom line, it would also be against the core responsibility of the gallery.”

Jumping on the bandwagon

As blue-chip works dropped off, young, female and black artists rose to prominence, particularly at auction. As much as 23% of the value of post-war and contemporary sales in 2019 were works created in the past 20 years (up from just 14% in 2018).

While most dealers view the move away from a very small group of blue-chip, white, male artists as a positive thing, McAndrew says “others worried about what they considered was ‘bandwagon jumping’ and the negative effects it could have on the stability and longevity of some of these artists’ markets”.

Despite there being much lip service paid to female artists over the past few years, “changes have been slow and patchy”, McAndrew says. Some strides have been made recently. For instance, the representation of female artists by primary market galleries rose 8% to 44% in 2019, while their share of sales also increased from 32% in 2018 to 40% in 2019. However, for galleries working in the secondary market dealing with more historical works, the share of female artists was 23% and they accounted for just 17% of sales.

The gender disparity is perhaps most pronounced at auction. In 2019, works by female artists accounted for just 7% of the lots sold and 6% of the value of sales in the auction market. Only 7% of the artists with works selling for over $1m were women, and only 5% selling over $10m were women.

The data collected at art fairs makes equally dismal reading: over the past 20 years there has been a 5% increase in share for women in the emerging artist category and a 6% increase for established artists. But the share of female artists represented in the top 2% segment of artists has marginally declined since 1999.

Looking forward, McAndrew predicts 2020 will be “a challenging year”. The coronavirus “will certainly have an impact; Art Basel in Hong Kong being cancelled is huge”, she says. Tariffs, more protectionist stances in various countries and the issue of sustainability are all likely to impact the trade. But will it deter buyers? “Some people will be distracted," McAndrew says. “But others turn to the finer things in life to take their minds off what is happening in the world.”