While cultural life in Kabul is constrained by growing insecurity and terrorist attacks—the US Embassy urges Americans to exercise “extreme caution if moving around the city”—a 20-strong group of Afghan artisans are preparing to travel to the US capital for a major exhibition opening in March. Co-organised by the Kabul-based charity Turquoise Mountain and the Smithsonian’s Freer and Sackler Galleries in Washington, DC, it will be the Kabul institution’s most ambitious exhibition so far.

Turquoise Mountain is an artisanal training centre founded ten years ago by Prince Charles and the then Afghan president Hamid Karzai. The $1.3m show will see a team of woodcarvers re-create a 19th-century arcade with two tonnes of Himalayan cedarwood, shipped from Kabul for an installation where Afghan artists, calligraphers and jewellers will ply their trade.

The exhibition, which is being backed by the Sackler family, is intended to champion traditional cultural life in Afghanistan even as renewed conflict drives a growing stream of refugees. The institute has trained 450 Afghan artisans with 150 Afghan staff but has progressively reduced its Western staff from 25 to three. The long-time British director of Turquoise Mountain, Thomas Wide, is winding down his role there; in Kabul, the US embassy now uses helicopters for the 1.5-mile journey from the airport.

The show will focus on Turquoise Mountain’s ten-year transformation of the Murad Khani area in old Kabul into a cultural and economic hub. The wider goal, Wide says, is to “disrupt stereotypes” of Afghanistan.

The director of the Freer-Sackler, Julian Raby, says: “We have dehumanised everybody in the process of talking just about the horrors of war and it’s been going on for four decades.” Raby says the initiative has saved and restored 112 buildings and transformed lives. He hopes US veterans of the Afghan conflict can visit the show, perhaps helping to heal mental scars.

It will be held in a new space of more than 8,000 sq. ft, comprising three galleries in a narrow configuration to re-create the arcades of Kabul’s caravanserais and merchant palaces. It will range from large photographic works to jewellery and carpetwork, and move from a bleak antechamber to scenes of children with kites at the end. It will include 12 short films, and aim to tell a story with 20 artisans working, in pairs, at the gallery over ten months.

It will show “living art curated by the Afghans themselves”, Wide says. “It becomes even more important as security deteriorates. It’s almost an act of resistance to make something beautiful.”

The museum expects perhaps 350,000 visitors to the exhibition, which runs from 15 March 2016 to 29 January 2017. Jillian Sackler, the widow of one of the gallery’s founders, is supporting the show, while the philanthropist Theresa Sackler, is a long-time supporter of Turquoise Mountain. The Freer Gallery, one of the Smithsonian’s two museums of Asian art, closes this month until spring 2017 for renovations. The Sackler Gallery remains open. 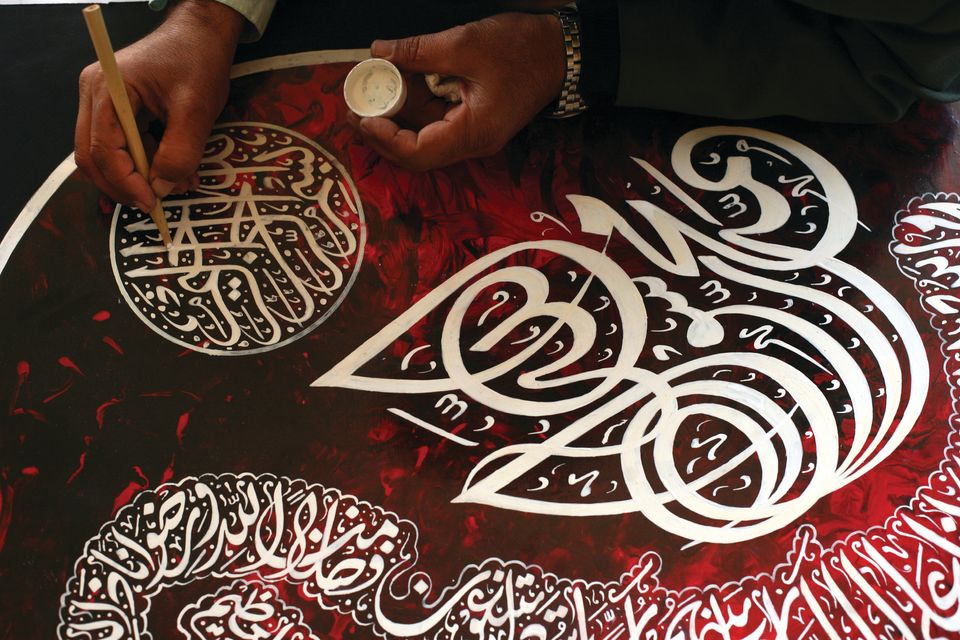 Made in Afghanistan: a social enterprise   Among the artisans in the Freer-Sackler exhibition is the Turquoise Mountain jewellery maker Saeeda Etebari. Born in a refugee camp in Pakistan, she was diagnosed with cerebral meningitis. She communicates only in sign language, but has collaborated closely with the British jewellery designer Pippa Small; their work has featured in Wallpaper magazine and Milan Design Week. The show includes a 140-emerald piece from her, as well as a large carpet by the award-winning Turkish-American designer Erbil Tezcan that was made in Afghanistan.

Calligrapher Samira Kitman’s work is inspired by the 15th-century kitabkhana (workshops) of Herat, an ancient city in western Afghanistan. She was named Afghan Female Entrepreneur of the Year in 2015 after winning a contract in 2014 to supply 600 original pieces and 7,000 prints, framed in Afghan walnut, to a 3,500-room hotel in Mecca, Saudi Arabia. She focused on hiring female workers because of the difficulties women face in working. “We have security problems in Afghanistan,” she says. “It’s difficult to find a market in Afghanistan, but we want to find different projects in different countries.”

As well as working to revive visual arts and crafts in Afghanistan, the Turquoise Mountain centre has helped to set up two primary schools and a clinic.

about 11 hours ago
Hackneyed old Hockney: Museums need to be courageous, even in survival mode