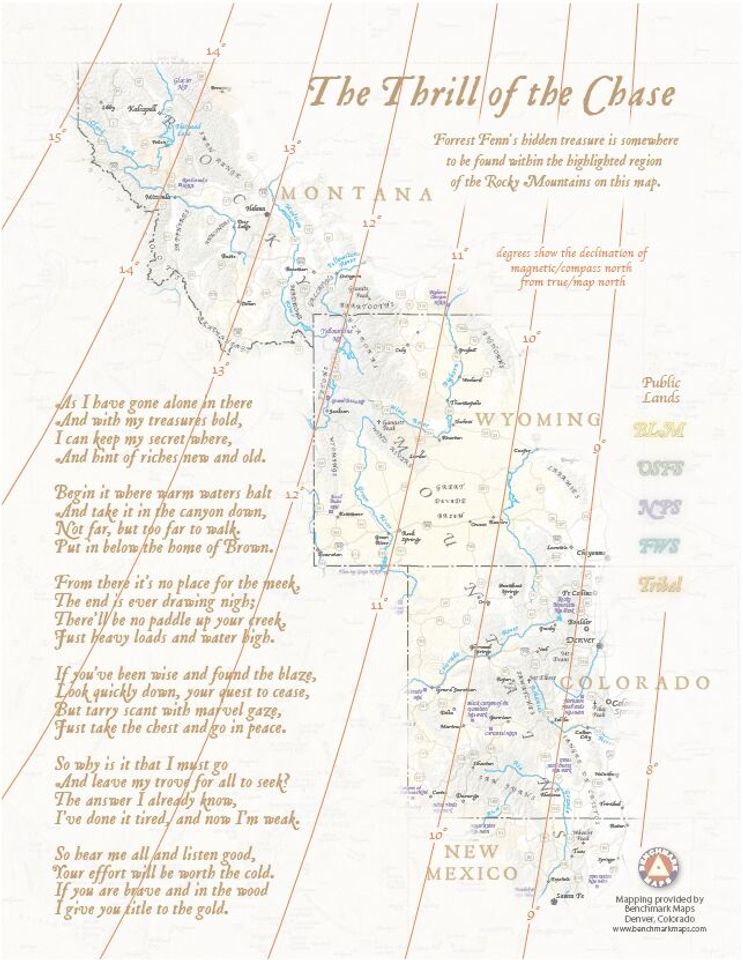 Ten years ago, the now 89-year-old antiques dealer and author Forrest Fenn published a poem titled “The Thrill of the Chase”. Within the poem’s six stanzas were a set of nine clues that, according to Fenn, would lead to a treasure chest he had hidden in the Rocky Mountains. After an estimated 350,000 people searched for the bounty, with at least five dying in the process according to The Santa Fe New Mexican, the treasure has finally been found by an unnamed individual and its contents appear to be worth between $1m and $2m.

“I found a beautiful little Romanesque treasure chest and I started filling it up with gold coins and gold nuggets and about 280 rubies. There are two salon sapphires, there are eight emeralds, a bunch of diamonds, but mostly gold,” Fenn told CNN in a video interview conducted a few years ago. The chest also contained pre-Columbian artefacts and Chinese carved jade figures. “I don’t know what it’s worth and I don’t even want to think about that. You’re not going to be disappointed if you find that treasure chest,” Fenn says.

After posting that the treasure had been discovered on his website, Fenn confirmed that “it’s true” in an interview with the Santa Fe New Mexican newspaper on Sunday, noting that “the guy who found it does not want his name mentioned. He’s from back East.” Fenn added that the finder proved the discovery by sending Fenn a photograph, though he declined to share the image with the media.

“It was under a canopy of stars in the lush, forested vegetation of the Rocky Mountains and had not moved from the spot where I hid it more than 10 years ago,” Fenn says in a statement. “I do not know the person who found it, but the poem in my book led him to the precise spot.”

The unlikely tale does not end there, though. With the trove now unearthed, lawsuits have also begun to take shape. Barbara Andersen, a real estate attorney from Chicago, is filing an injunction in US District Court, alleging that she solved the puzzle and is the treasure’s rightful owner. “He stole my solve,” Anderson says. “He followed and cheated me to get the chest.”

David Hanson of Colorado Springs, Colorado, has also gotten the law involved—he sued Fenn for $1.5m, claiming that Fenn gave misleading clues. A judge dismissed this lawsuit in February, but Hanson is asking for it to be reopened.

As for Fenn? “I feel halfway kind of glad, halfway kind of sad because the chase is over,” he says. He first planted the treasure in the wake of the 2008 economic crash, hoping the search for riches would be a morale booster that would also lead people to discover the joys of the outdoors. In a statement he added, “I congratulate the thousands of people who participated in the search and hope they will continue to be drawn by the promise of other discoveries.”