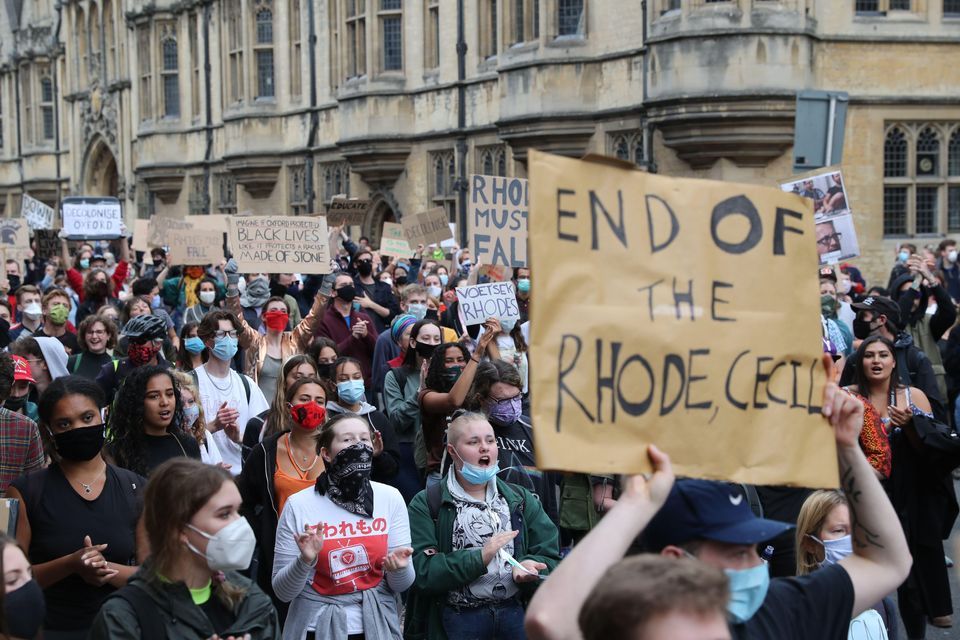 The row over the controversial statue of the British imperialist Cecil Rhodes has deepened after more than 150 academics from across Oxford University have refused to teach undergraduate students from Oriel College, where the monument stands, as long as it stays in place.

The "statement of a boycott of Oriel College" was published on Oxford's internal communication system with a list of signatories according to the Daily Telegraph. It says that “faced with Oriel’s stubborn attachment to a statue that glorifies colonialism and the wealth it produced for the college, we feel we have no choice but to withdraw all discretionary work and goodwill collaborations”.

Signatories will "refuse requests from Oriel to give tutorials to Oriel undergraduates", says the statement (The Guardian elaborates, reporting that the 150 academics involved in the protest are not declining to take part in core teaching). As well as refusing to tutor, the dons will also not interview admissions candidates or attend talks sponsored by the college

Last month, Oriel College said it had no plans to “begin the legal process for relocation” of the statue of Cecil Rhodes following a report by an independent commission which recommended that the college should “now invest in understanding and contextualising its relationship with Rhodes”. More than 350 academics from across the university subsequently wrote to Richardson in protest.

Robert Gildea, the professor emeritus of modern history at Oxford University, also signed up to the boycott. He told BBC Radio 4 that taking no action against Oriel’s decision was "not acceptable", adding: "If the college put up a notice explaining who Cecil Rhodes was that would be fine, if the college put a placard round his neck at lunchtime today saying 'sorry' that would also be fine."

Gildea tells The Art Newspaper that “the boycott does not apply to graduate students. Neither does it prevent Oriel undergraduates attending university classes, lectures or examinations.” Kate Tunstall, the interim provost of Worcester College, is also backing the boycott.

Other Oxford academics criticised the move however. John Tasioulas, professor of ethics and legal philosophy, wrote on Twitter: “For pity’s sake, leave the students out if it, in this of all years.” Professor Louise Richardson, the vice-chancellor of the University of Oxford, said she was “deeply disappointed that some of my colleagues would choose to punish students, and prospective students, for the actions of their college's governing body”.

Writing in The Guardian today, Simukai Chigudu, associate professor of African politics at the University of Oxford, says that the Rhodes statue is “no mere physical artefact. It is imbued with a noxious history. Its presence at Oriel College reframes Rhodes’ conquest as munificence to the university and fails to recognise the exploitation of African labour from which his estate was built. It belongs in a museum, where it can be properly historicised”.

Campaigners from the Rhodes Must Fall in Oxford group—which was formed by students in 2015 and was reignited by the toppling of the Edward Colston statue in Bristol last year by Black Lives Matter demonstrators—say that the 19th-century politician and diamond mining magnate represents white supremacy and supported apartheid-style measures in South Africa.

The statue of Colston was recently put back on display at M Shed Museum in Bristol (until 5 September). But this also sparked further controversy after the campaign group Save Our Statues told its followers on social media to block book places, limiting admissions.

Robert Poll, the organiser of Save Our Statues, told The Times: “The intent behind the Colston exhibition protest is very simple: it is a stand for due process. The display in its current format is a celebration of criminal violence and mob rule. As a grade II listed piece of UK heritage, the council has a legal obligation to repair it.” According to the museum website, numerous admission time slots are available over the next week.