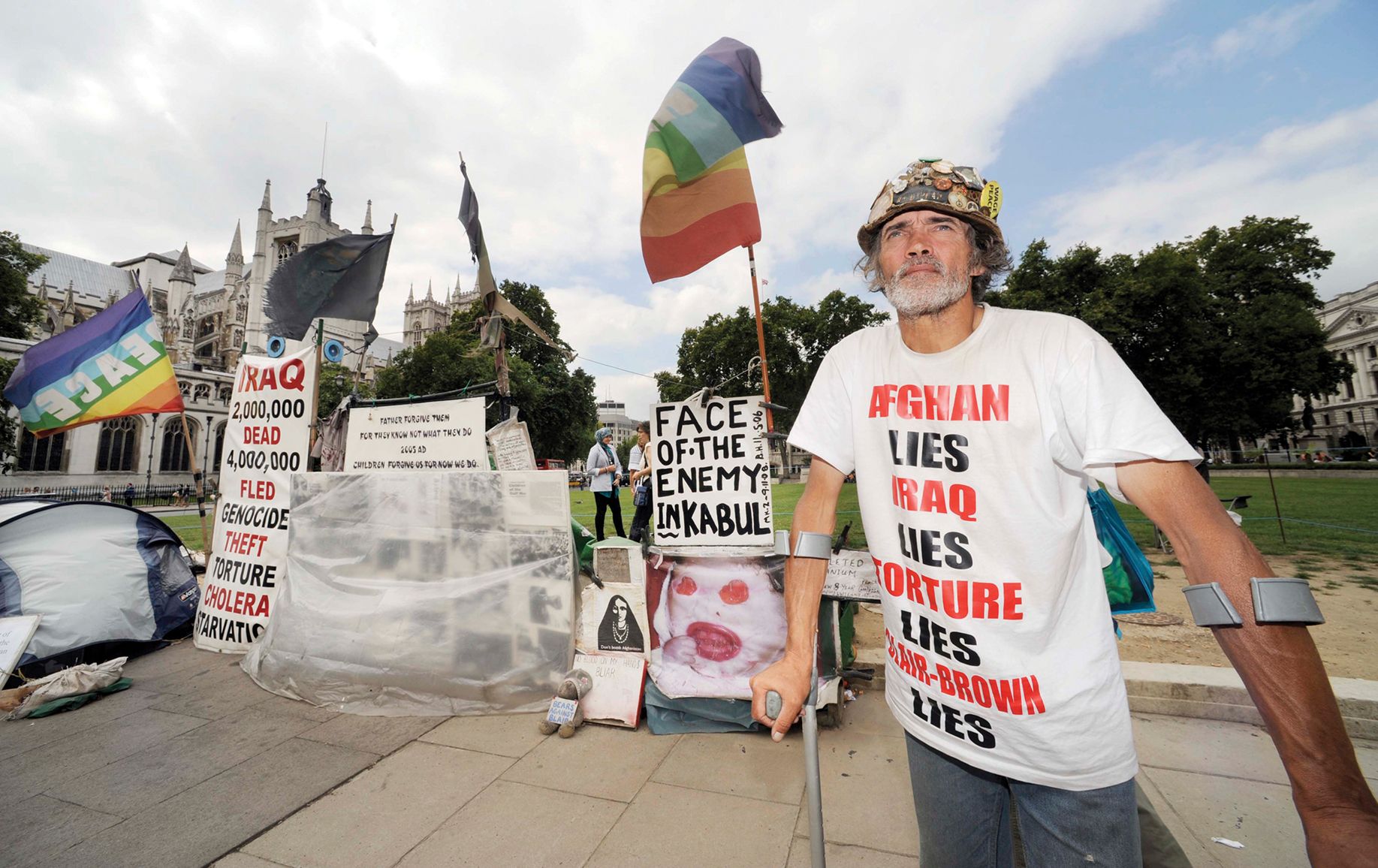 The late peace activist Brian Haw lived for almost ten years at his protest camp in Parliament Square; it was removed after a new law was introduced in 2005 © David Ashdown/Getty Images

If the UK has enjoyed a period of relative calm over the past decade, the protests over Brexit in 2018, Extinction Rebellion in 2019, Black Lives Matter in 2020 and Kill the Bill in 2021 have changed all that. The art world has become a space for conversation and debate, with a rising number of artists tackling socio-political issues and protest in their work. Several have gone on to successfully fight for their causes as activists.

The Police, Crime, Sentencing and Courts Bill (PCSC) currently making its way through the House of Lords has been promoted by the government as aiming to restrict rights to protest. This wide-ranging bill seeks to criminalise noisy, disruptive protest and applies to both group and one-person demonstrations. It also seeks to criminalise the incitement of protests, and to remove the defence of unknowingly breaking this law, passing responsibility of interpreting this to the police on the ground.

“The PCSC targets the very qualities that make many protests effective—the ability to make a noise, disrupt the status quo, and annoy those in power,” says Charlie Holt, the UK campaigns adviser at human rights organisation English PEN.

The work of many artists manifests itself as an act of protest. From Tania Bruguera to Banksy, artists intervene in public space in the form of murals, posters, augmented reality and performance. Protests against institutions have also had an impact, one example being Nan Goldin’s Sackler Pain campaign, which targeted museums that accepted money from the Sackler family whose pharmaceutical company was implicated in the US opioid crisis.

“Under the proposed law, noisiness—an inseparable part of almost any successful protest—would become a trigger for police control, while ‘serious annoyance’ would be a legally actionable form of public harm,” Holt says. “The proposals should be considered a threat to anyone who seeks to hold the powerful to account or challenge prevailing norms through provocative forms of self-expression. Indeed, given the broad scope of the new statutory offence and the explicit provisions on one-person protests, the application of the bill could stretch to performance art as a form of protest.” 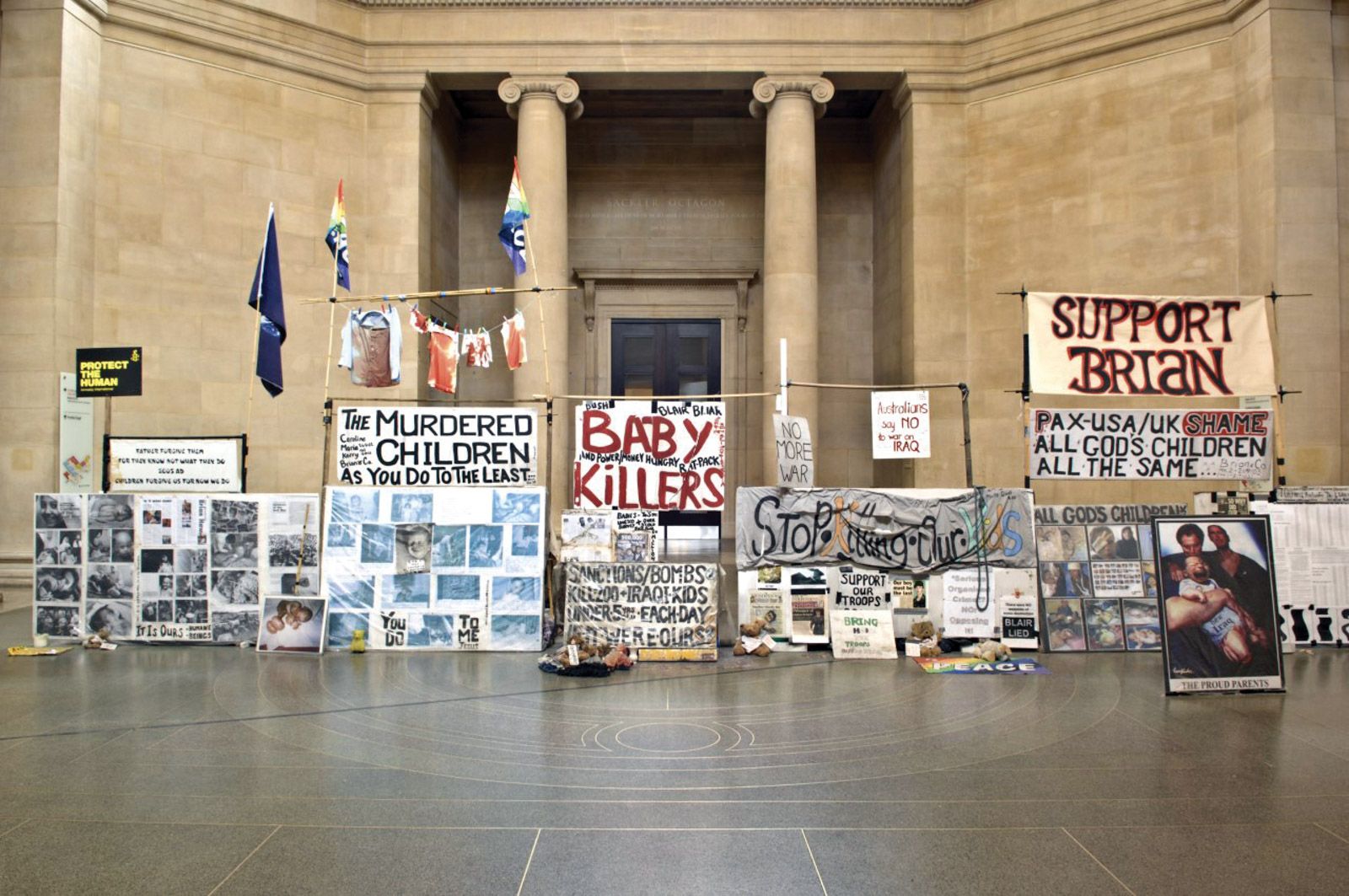 Mark Wallinger’s State Britain (2007), recreating Haw’s camp, flags up issues around the right to protest Courtesy of the artist

When Mark Wallinger decided to document Brian Haw’s one-man protest over the Iraq war, in what became his Turner Prize-winning work State Britain in 2007, it was in reaction to the Serious Organised Crime and Police Act (SOCPA) 2005. A knock-on effect of the act was the removal of Haw’s camp in London’s Parliament Square, a recreation of which was installed by Wallinger at Tate Britain.

“There was a sense of urgency,” Wallinger says. “He [Haw] had lost an appeal and in actual fact, when I proposed it to [Tate staff members] Clarrie Wallis and Judith Nesbitt, it was that very night that the police arrived to remove everything.” Wallinger knew prior to his proposal that the 1km exclusion zone stipulated by SOCPA would cut through the middle of the Duveen Galleries. “The limit of free speech!” he says.

Wallinger was reminded of his reaction to SOCPA when learning of the PCSC Bill, alarmed by the vague wording and high sentences it contains.

“The use of vague terms that can be shaped and bent by any kind of regime speaks to a real recklessness that could endanger principled and downtrodden, righteously angry people,” he says.

The incitement part of the bill has also raised concern due to its lack of clarity. Last year, as debates over museum workers’ rights, the toppling of monuments and the treatment of Black people played out with people taking to the streets (mostly peacefully), the media responded with reports and opinion pieces. Under this bill it is unclear whether such articles or even provocative documentaries for or against an issue would be looked upon as incitement.

The idea that protest is intrinsic to progress on important issues such as climate change and human rights is ingrained in British culture. It is also something that the press would automatically report on.

“The NUJ [National Union of Journalists] remains concerned about the proposals in the policing bill. If public interest journalism sparks public protests in response, then this should not be considered as incitement. There should be a statutory protection for the right to protest and the media should have the right to report,” says the NUJ’s general secretary Michelle Stanistreet.

The Ghanaian-UK artist and film-maker Baff Akoto—whose augmented reality public work UP:RISE (2021) allows people to view footage of past protests and hear from those who protested at the time via their phones—is unfazed.

“I don’t think people would be deterred by [the PCSC],” Akoto says. “We have a tradition of rioting and protest in this country. What you’re not going to be able to do is to legislate away the impulse to stand up and rise up and gather.”

The Chisenhale Gallery, a non-profit contemporary art gallery in East London, has also supported such work. “I think that voicing and acting on political arguments publicly is something that artists, the public organisations that host them, and the people who work in them, will continue to do,” says Ellen Grieg, the Chisenhale’s senior curator.