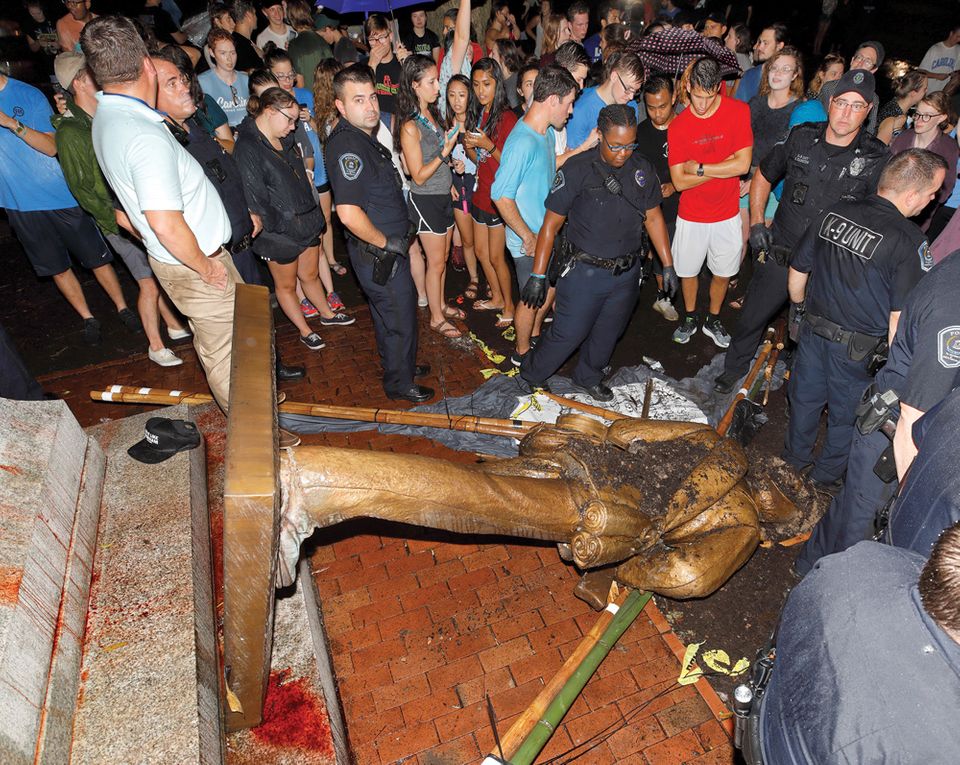 The statue of a gun-toting Confederate soldier at Chapel Hill, nicknamed Silent Sam, was toppled by protestors in August © Reuters/Jonathan Drake

Update: on 14 January, UNC-Chapel Hill’s chancellor, Carol Folt, announced that she has authorised the removal of Silent Sam’s base and commemorative plaques, stating that their presence “poses a continuing threat both to the personal safety and well-being of our community and to our ability to provide a stable, productive educational environment”, and added that “safety concerns alone should preclude the monument from returning to campus”. “While I recognise that some may not agree with my decision to remove the base and tablets now, I am confident this is the right one for our community – one that will promote public safety, enable us to begin the healing process and renew our focus on our great mission,” she said. The objects were removed overnight (14-15 January) and will be preserved “until their future is decided”. Folt is also stepping down as chancellor, a position she has held since 2013. In a statement, the board of trustees voiced their support for Folt's decision to remove the remainder of the monument.

As the debate continues in the US about what to do with Confederate monuments, the University of North Carolina (UNC) board of governors has voted against a proposal to build a $5.3m museum on the UNC Chapel Hill campus that would house a bronze statue of a gun-wielding Confederate soldier. The statue, known as Silent Sam, was toppled by protestors in August and has yet to make its way back to the campus, due to safety concerns and community opposition.

The plan for a new History and Education Center, presented by UNC Chapel Hill’s board of trustees and chancellor on 3 December, was rejected by the main UNC board on Friday (14 December). The chair, Harry Smith, cited concerns for public safety and objections to the use of state funds for the “preservation of the statue”.

The UNC Chapel Hill board said that it would prefer to move the statue to a secure off-campus location, such as the North Carolina Museum of History in Raleigh. It was described by the chancellor Carol Folt at a press conference after the vote as “the best way to ensure the safety and security of our people and campus”. However, state law prohibits the removal of a historical artefact from its county—a law that “prioritises the safety of slave-holding monuments more than the safety and dignity of our students”, and therefore “must be disobeyed”, says Omid Safi, the director of the Islamic Studies Center at Duke University and a former UNC professor.

Safi says that there has been “a rise in white supremacy all around us, everywhere from local groups—literally Nazi and white supremacist groups on the UNC campus—at the University of Virginia, and in the White House”. He notes that there are buildings at Chapel Hill named after white supremacists, such as the university alumnus Julian Carr, who bragged at the dedication of Silent Sam in 1913 of having beaten a black woman just a football field’s length from where the statue stood.

“Innocuous as it seems to see a gun-toting soldier, its dedication was one of the worst in the history of all confederate monuments,” says Harold Holzer, an author and historian who is an expert on Abraham Lincoln and the US Civil War. “It was clearly built as a monument to white supremacy.”

Chris Suggs, the secretary of the UNC’s Black Student Movement (BSM), voiced concerns about the centre’s proximity to student housing, saying that it “could spark protests or encourage people who are apologetic [about] Confederate values to come to our campus”. Like other members of BSM and the graduate student-led Black Congress, Suggs has petitioned the university to provide at least an explanation of the statue’s history and context if it cannot move it off-campus. “We thought that if it had to be on campus, then it needed to tell the full story of the statue—things that were a part of its history that were so oppressive to black people,” he says.

A spokeswoman for UNC Chapel Hill says the history and education centre “has been a longstanding goal and was expressed as such in 2015 in a board of trustees resolution” and that “Silent Sam would be just one of many exhibits”. According to the university’s website, the centre “would teach the lessons from Carolina’s long and complicated history as the nation’s first public university”, exploring topics including slavery, Jim Crow laws, civil rights and the liberal arts. “There are no plans at this time without the board of governors’ support” to build the centre for other exhibits, the spokeswoman says.

In Holzer’s view, the Silent Sam statue might not even be worth studying. “I know it’s impossible to have a jury assess each [monument], but I think these things that were mass-produced so that every little town or college could have a soldier just don’t reach the level that requires contextualisation,” he says.

The UNC Chapel Hill trustees will now explore other options for Silent Sam, including a permanent off-campus move, ahead of another board meeting on 15 March. “Our community is carrying the burden of an artefact given to us by a previous generation,” Folt says. “The burden of the statue has been, and still is, disproportionately shouldered by African Americans.”