More than four years since the end of loans between Russian and US museums, New York’s Neue Galerie is presenting a show of Russian Modernism that includes works by Kandinsky and Natalia Goncharova, including pieces from Russia. “As far as I know, this is the first major show of Russian art in the US since the introduction of the embargo,” says the Russian art scholar Konstantin Akinsha, the exhibition’s curator. The twist is that the loans are from Russian private collections, not from museums.

Russia called a halt to museum loans in 2010, after the federal court in Washington, DC, ordered the country to turn over two book and manuscript collections to the Jewish sect Chabad, which is based in Brooklyn, New York. Since then, “inclusion of works from private collectors [has become] especially important”, says Natalia Murray, an independent curator who teaches at the Courtauld Institute of Art in London.

Russian Modernism: Cross-Currents of German and Russian Art, 1907-17, opens at the Neue Galerie on 14 May (until 31 August) with around 90 paintings and works on paper. “None of the works [from Russian collections]… have previously been exhibited in the US. Many of them have not been exhibited outside Russia for more than half a century,” Akinsha says. According to Scott Gutterman, the institution’s deputy director, “there were no problems” in getting the art out of Russia.

The show includes 39 works from the collection of Petr Aven, the billionaire businessman and the co-chairman of Moscow’s Pushkin State Museum of Fine Arts.

Russians “are eager to promote their collections, especially with creditable venues”, says Regina Khidekel, the director of New York’s Russian American Cultural Center. A distinguishing feature of these lenders is that “they’re not particularly concerned with promoting the [investment] value of their art, because they bought at the height of the market. They’re proud to exhibit their work,” says Jane Sharp, an associate professor at Rutgers University in New Jersey, who contributed an essay to the show’s catalogue.

Despite Russian collectors’ eagerness to exhibit, their collections are largely unexplored, and are an “under-represented resource” for US museums, Sharp says. The National Gallery of Art in Washington, DC, for example, has never obtained a private Russian loan, according to a spokeswoman for the institution.

The potential for loans to the US is wide-ranging. “It is fair to assume that [Russians] collect in all areas, ranging from Old Masters to contemporary art,” Akinsha says. Then there are the older collections that escaped nationalisation during the Soviet era. “Some important private collections built during the Soviet period still belong to their owners,” he says.

In putting together the show, Gutterman says that Akinsha “led the way”. The guest curator drew up the list of loans and had great contacts, Gutterman says. But “very few” US institutions have those contacts, Sharp says, adding: “What’s in Russian museums [and under embargo] can’t be replaced.” 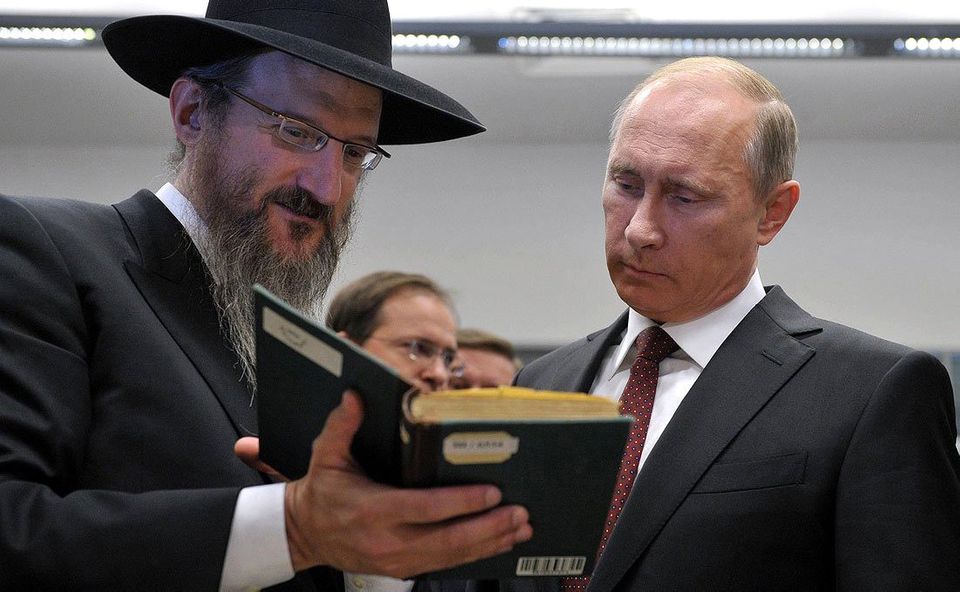 Vladimir Putin with Russia’s chief rabbi and one of the disputed books. Photo: Kremlin

Russia’s museums stopped lending to the US in 2010, after the federal court in Washington, DC, ordered the country to turn over two collections of books and manuscripts to the Brooklyn-based Jewish sect Chabad. A library was nationalised after the Russian Revolution and an archive was seized by the Nazis and then by the Soviets at the end of the Second World War. Russia claimed that the court had no jurisdiction over the country, called the court’s action illegal and said that the embargo would continue until Chabad’s lawsuit, now ten years old, is dismissed. On 1 May, Chabad began to seek Russian assets in the US. The group is also waiting for the court to act on its request to collect sanctions of $50,000 a day, imposed on Russia for not complying with the court’s order. Steven Lieberman, Chabad’s lawyer, says that its goal is not financial, but to “get Russia to give back the books”. The US State Department opposes Chabad’s request, preferring the dispute to be resolved through diplomacy.