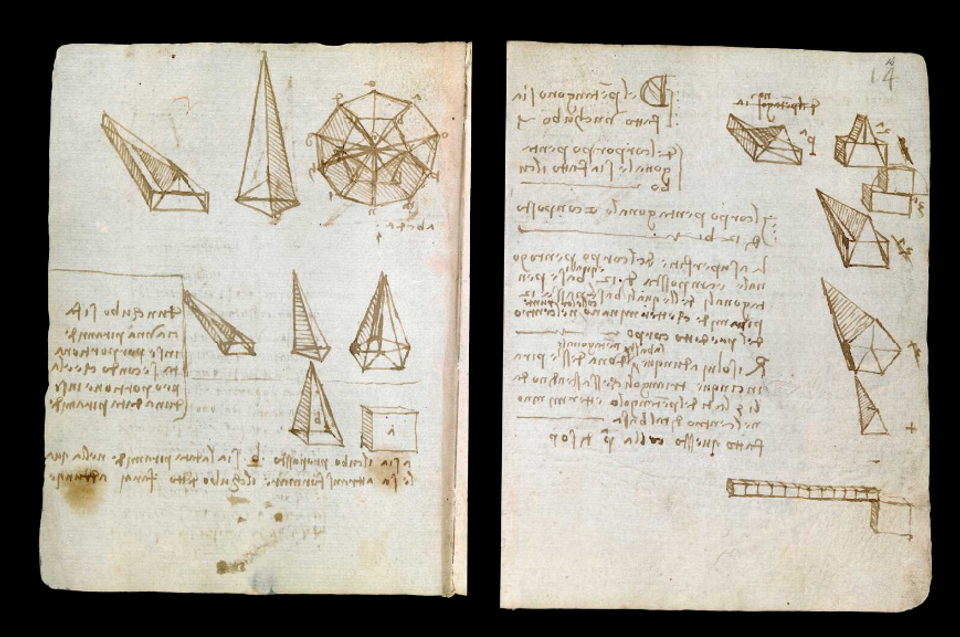 Scholars and digital experts at the Victoria and Albert Museum (V&A) in London have posted online the contents of two notebooks by Leonardo da Vinci, enabling devotees of the Renaissance polymath to zoom in and examine his revolutionary ideas and concepts.

Codex Forster I is made of two notebooks which were bound into one volume after Leonardo’s death. Codex Forster I contains both the earliest (from folio 41, around 1487-90, Milan) and the latest notebooks (up to folio 40, 1505, Florence) that the V&A possesses. These notebooks are named after John Forster, who bequeathed them to the museum, along with his library, in 1876.

The V&A has three other notebooks, bound in two volumes, which are called Codex Forster II and III. “We are planning to make these two other volumes also fully accessible online in 2019 to celebrate the 500th anniversary of Leonardo’s death,” says Catherine Yvard, Special Collections curator at the V&A’s National Art Library.

“The notebooks remind us that Leonardo was as much an engineer as he was an artist. When he wrote in the early 1480s to Ludovico Sforza, then ruler of Milan, to offer him his services, he advertised himself as a military engineer, only briefly mentioning his artistic skills at the end of the list,” Yvard says.

Codex Forster I dates from the time Leonardo spent at the Milanese court and focuses on hydraulic engineering, featuring drawings of instruments for digging canals and for moving and raising water. It also includes a treatise on geometry and measuring solids.

The conservation aspect is crucial as the notebooks are extremely fragile. “If we want them to survive another five centuries and more, we need to make sure that we do not submit them to too much handling, while making their fascinating content accessible in different ways which will not harm them,” Yvard stresses.

On the technical front, the use of IIIF (International Image Interoperability Framework) to present a digital version of the notebooks is an innovation. “It’s our use of the IIIF standard that has enabled us to present the codex in a new way. The V&A digital team has been doing a lot of work in the last 18 months using IIIF. We’ve used the deep-zoom functionality enabled through IIIF to present some of the most spectacular and detailed items in our collection,” says Kati Price, the V&A’s head of digital media and publishing.