The city took a big financial hit during the pandemic. But as things improve, locals are pushing for a more sustainable form of tourism 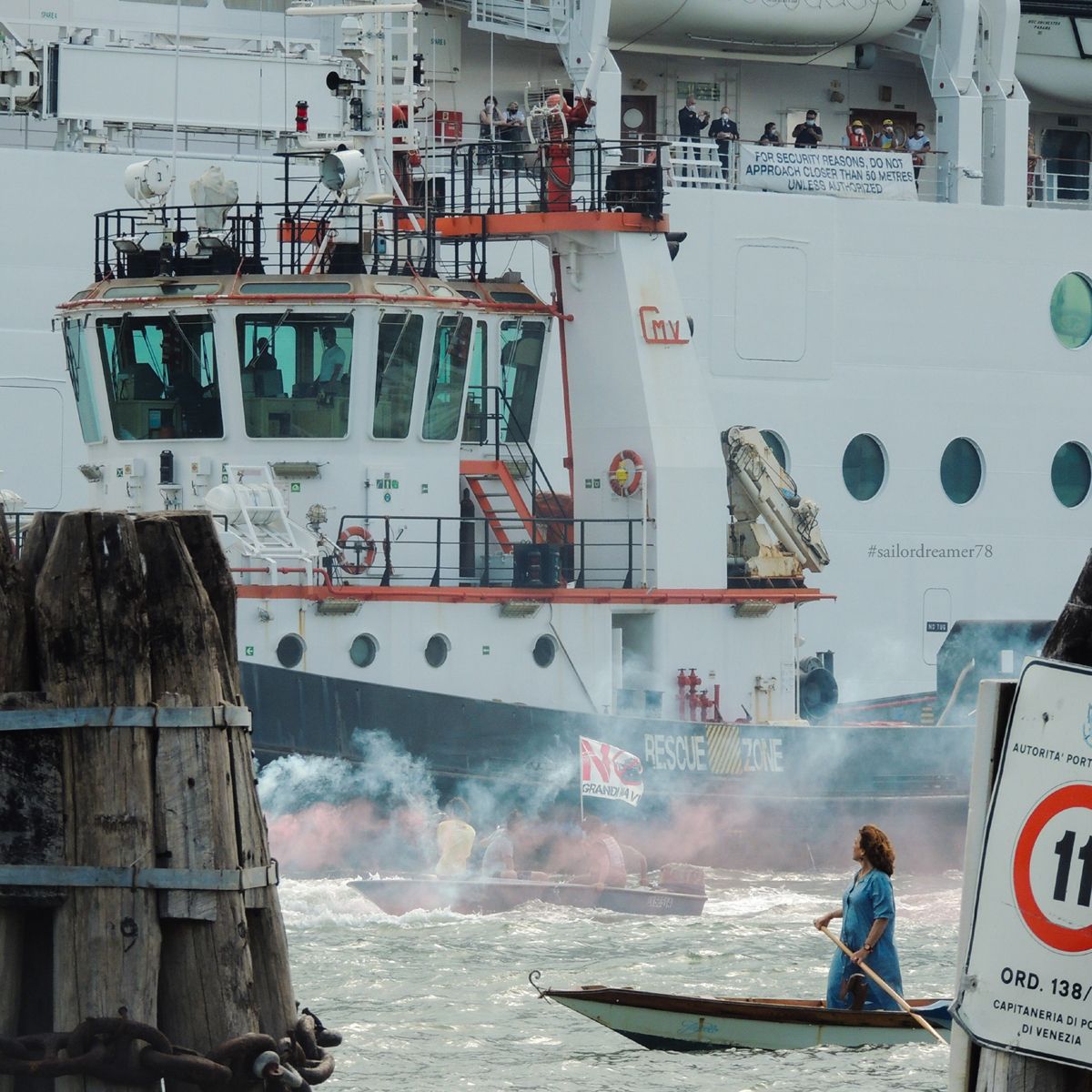 Jane da Mosto protests as the MSC Orchestra sails into Venice in June, the first cruise ship to visit the city since the pandemic struck Michele Gallucci (@sailordreamer78)

The Venice Architecture Biennale is attracting thousands of visitors to the city and refilling its hotels, driving the recovery of Venice’s tourism industry that has been ravaged by the lockdowns. “The Biennale effect”, as the local newspaper Nuova Venezia dubs it, shows how the arts could aid Italy’s economic recovery, but activists have warned cultural organisations against fuelling the return of rampant overtourism.

After opening on 22 May (it closes on 21 November), the Architecture Biennale had generated 31,000 visits within 24 days (30% from abroad) compared with 33,500 over the same period in 2018. While most of Venice’s 300 hotels were still closed two weeks before the Biennale, 70% had opened by the start of the exhibition, with 60% of rooms booked during weekends in mid-June, Claudio Scarpa, the director of the Venice branch of the Federalberghi hoteliers association tells The Art Newspaper. The annual boat fair Salone Nautico (28 May-5 June), which drew 30,000 visitors, also helped fill hotels.

Hoteliers have struggled in other parts of Italy—650 of Rome’s 1,250 hotels were still closed in the second week of June, according to Federalberghi—but museums across the country have rallied since reopening from 25 April. In May, Pompeii welcomed 26,000 visitors and Florence’s Uffizi clocked 100,000 visitors.

“The arts will be key to reviving tourism in this country,” says Magda Antonioli, a board member of the Italian Government Tourism Agency. “People go to Las Vegas for the luxury hotels. In Italy, they come for the culture.”

But Jane da Mosto, the executive director of the non-profit campaigning organisation We are Here Venice, has urged arts organisations to avoid tourist-centrism. In January, Da Mosto was among 6,000 people who signed an appeal contesting mayor Luigi Brugnaro’s declaration that the city’s civic museums would remain closed until tourists had returned. “Museums should focus on safeguarding heritage and providing culturally enriching services, irrespective of whether the visitor is a resident or passing through,” Da Mosto says.

In 2020 there were 71.5% fewer tourist arrivals in Venice and 59.7% fewer in Italy due to the Covid-19 pandemic, compared with 2019. Tourism generated 13% of GDP in 2019, but only 7% last year, following losses of €100bn, according to the newspaper Corriere della Sera. In July, Prime Minister Mario Draghi is planning to activate systems for quarantine-free travel in Italy in efforts to kickstart the tourism industry. Previous levels of tourism could return in 2023 or 2024, according to Antonioli.

Even so, various museums and arts organisations have pledged to combat overtourism and cultivate local communities. Roberto Cicutto, the president of the Biennale, aims to transform its archives into a multi-disciplinary research hub drawing academic talent and international institutions to the city. “We hope this will create a different kind of residence to the fleeting visits the city has become accustomed to,” Cicutto says.

Da Mosto urges the Biennale to deliver on the initiative, saying: “We’ve had enough of plans—we want to see concrete actions”. In response, Cicutto admits: “We are clarifying our plans fairly quickly, but something is still missing from the planning process: a true co-operation agreement between the Venetian institutions that will allow us to create something unique throughout the world.”

Cruise ships are back: a ‘brutal return to business as usual’

On 3 June a cruise liner sailed into Venice for the first time in 17 months, despite the Italian government’s pledge in April to keep large ships out of the lagoon city. The MSC Orchestra was met with hundreds of protesters including Jane da Mosto, an environmental scientist and director of the campaigning group We are Here Venice, who faced off against the enormous vessel in a rowing boat. She describes the ship’s arrival as “a disaster” that provoked “huge outrage locally as well as globally and extinguished the credibility of the Italian government”. She tells The Art Newspaper that “no one was psychologically prepared for such a brutal, arrogant return to ‘business as usual’. We were accustomed to the serenity of our city without these metallic monsters and had allowed ourselves to imagine that Venice would be the perfect platform for the ‘ecological transition’, a pilot site and innovation hub for alternative productive activities and types of jobs. We need the international community to join us in saving our city for the world, rather than sacrificing it to the short-term profits of the cruise companies.”