Photographs of works made by artists using decommissioned weapons are displayed in Senate building one month before the election, while originals are on view at local think tank

The US Senator Tim Kaine, who took the stage in the vice presidential debate on Tuesday 4 October, is sponsoring an exhibition inspired by art made from decommissioned guns in a Senate office building in Washington, DC. The show, Guns in the Hands of Artists (until 7 October), has been traveling the country for the past two years and makes its final stop in the US capital just one month before the presidential election.

For the show, 30 artists—including Mel Chin, William Villalongo, R. Luke Dubois and Margaret Evangeline—used more than 180 guns that had been collected by New Orleans police through a citywide buyback programme as raw material to create new work. The exhibition’s first iteration was co-organised by the New Orleans-based dealer Jonathan Ferrara and the artist Brian Borrello in 1996, the same year the city was named America’s murder capital.

Ferrara says he hopes the exhibition will foster “a new discourse by bringing the discussion into the realm of art, without the often partisan and polarised politics that surround the issue.” Perhaps unsurprisingly, however, he found that mounting an exhibition in one of the country’s most scrutinised buildings was no simple matter. Presentations in the rotunda of the Russell Senate Building must be sponsored by a sitting US senator and approved by the Senate’s Rules and Administration committee.

“I went into this rather naively—I was thinking, ‘Great, we can bring the artworks with guns into the rotunda,’” Ferrara says. “They said, ‘You can’t actually do that.’” He was told that the building did not have the proper security or insurance to present the original works.

Instead, Ferrara has decided to show photographs of the works in the rotunda and display the originals at the nearby New America Foundation, a think tank a few blocks from the White House. He also agreed to show only a portion of the exhibition’s most controversial work, Neil Alexander’s Growing Up in a Gun Culture, My Son (1996-2014). Alexander photographed his son naked and wielding a gun as a child and then 18 years later, as a young adult. The images on display in the Senate building show the boy only from the waist up.

Ferrara was introduced to Kaine, a long-time gun control advocate, through mutual friends last year. Hillary Clinton’s running mate agreed to sponsor the show and write an essay for a book about the project, which is due to be published on 1 November. The book includes submissions from the rapper Lupe Fiasco, the journalist Joe Nocera and the activist Lucia Mcbeth, whose son Jordan Davis was shot and killed in 2012.

Kaine was governor of Virginia when a shooter killed 32 people on the campus of Virginia Tech in 2007. “Gun violence has been ever-present throughout my time in public service,” Kaine writes in the book. “I look forward to the day when we, as elected officials and Americans, live up to our responsibilities and put an end to this crisis.” 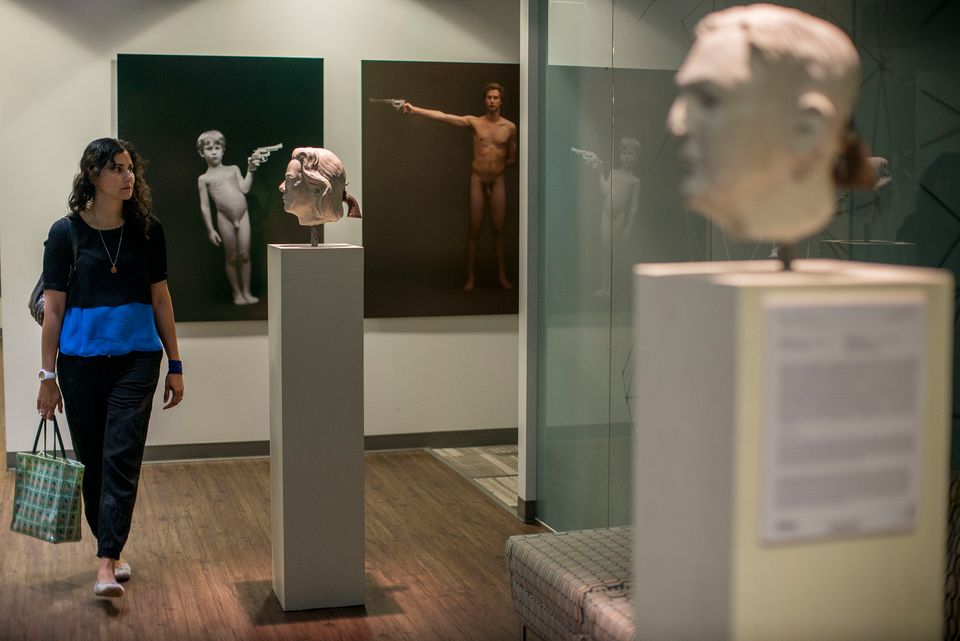